If Grandpa had a Santa suit ... 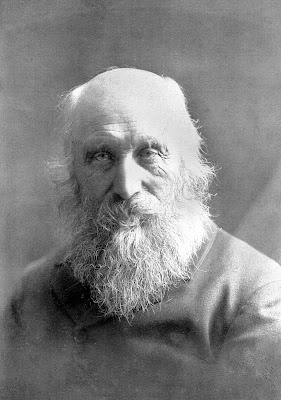 Here it is the Feast Day of St. Nicholas and I'm thinking again that if Grandpa Redlingshafer had had a Santa suit he'd have made a darned good portrayer. Look at that face. Look at that beard. Look at that tonsure, just like old Nicolaos himself, the bishop of Myra (actually, Grandpa was bald so he came by the tonsure naturally).
Great-granddad was dimunitive himself --- as was the good bishop. We know that because sailors from the Italian city of Bari snatched the bones of Nicolaos in 1087 from his basilica in Myra (now in Turkey) and deposited them in Bari, where they remain for the most part intact (unusual for the bones of a Christian saint, which tended to be dispersed as relics for veneration). They were measured and photographed during the 1950s and forensic review led to the conclusion that the good bishop was barely five feet in height --- and had a broken nose.
A Greek who lived from 270 until (reportedly) 6 December 346, Nicolaos gained a reputation as a secret giver of gifts and that made him the logical although convoluted source of our now highly secularized Santa Claus (from the Dutch Sinterklaas). St. Nick's feast day, however, still is widely observed in many places, primarily as a festival for children.
My own Santa, also known as John G. Redlingshafer, was born May 9, 1827, in one of the Redlingshafer family villages west of Nurnberg (Nuremberg) in Bavaria. He arrived in Pennsylvania from Germany with his parents and siblings during 1848 and settled in Lucas County in 1857 after scouting the territory out in 1856, then returning to Pennsylvania to marry Isabelle Greer.
Although baptized and confirmed in the Lutheran church, John and Isabelle were among the organizers and charter members of the Otterbein congregation of the United Brethren in Christ.
During the Civil War, John G. gained a reputation for kindness and generosity toward the families in the Wolf Creek-Otterbein neighborhood whose husbands, sons and brothers were serving in the military, perhaps motivated in part by his baby brother, John Lot Redlingshafer, who lied about his age and ran off to Albia to enlist at age 16 and managed to be captured in battle not once but twice before his discharge at the end of the war at age 21 unharmed and "with distinction."
John died at age 85 on Feb. 8, 1913, while being cared for by my great-grandmother, Mary Belle (Redlingshafer) Myers. And about that beard. Great-great-grandpa chewed tobacco and especially in his later years, that became a maintenance issue, or so we've been told. But cleaned up and properly dressed, he'd still have made a great Santa.
Posted by Frank D. Myers at 6:49 AM