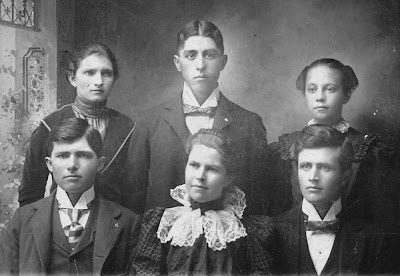 Seated (from left) are Earl Buck, Jessie Brown and Byron Love. Standing (also from left), Kate and Bud Chaney and Ada McCorkle.
This is a photo that for some reason always grabs my attention and every once in a while I pick it up, look into these young faces frozen in time and wonder what in the world their thoughts, expectations and aspirations were. They look so hopeful, or so it seems to me, and perhaps --- with good reason --- a little sad; and I'd like to know what was going on in their heads.
The photo was taken during 1899 at Superior, Nebraska, down south of Grand Island just a few miles north of the Kansas line. My grandmother, Jessie (Brown) Miller, is seated in the center with her nephew, Byron Love, on her left, and a niece, Ada McCorkle (the youngest in this group) standing just behind him. The other three were friends --- Earl Buck to the far left seated and Kate and Bud Chaney standing at left.
Jessie and  Byron were the same age --- born three months apart during 1875 at Columbia, Iowa, a few miles northeast of here, and were more devoted friends than conventional aunt and nephew. Ada, seven years younger, was born in Columbia, too, but had moved to Nebraska with her parents, Sam and Olive (Prentiss) McCorkle, in the mid-1880s. Olive McCorkle was my grandmother's elder half-sister as was Byron's mother, Laura (Prentiss) Love.
Not long before this photo was taken, Sam McCorkle had been struck and killed by a bolt of lightning while horseback on the range rounding up livestock during May of 1899. His death left Olive with six young daughters, Ada the eldest and Eunice, the youngest, only 3. Byron had come from Columbia to help his aunt with the farm.
Jessie and her mother (my great-grandmother), Chloe, had moved from Columbia to Nebraska by horse and wagon the previous fall because of the deteriorating health of Joe Brown, Jessie's only full brother and Chloe's only son. It was thought at that time that Nebraska's somewhat dryer air would improve his health. So they were there to offer support when Sam was killed, and also when Joe died at age 28 of tuberculosis at Bostwick, near Superior, four months later.
It was these sad circumstances that had brought Jessie and Byron, Ada and Earl and Kate and Bud together during the summer of 1899 --- and as young people often did in those days they decided to to dress in their finest, go into Superior and have this photo taken to commemorate their friendship. No digital cameras and quick snapshots in those days
Soon after, they parted and I don't know what became of Kate, Bud and Earl.
Chloe, Jessie and Joe's widow, Anna, and infant son, Merle, accompanied Joe's body back to Columbia during September of 1899 and Chloe and Jessie then picked up the threads of their life there. Jessie married my grandfather, William Ambrose Miller, in 1905, and they settled down to raise their family on the Miller farm in English Township, Lucas County, where Jessie died during January of 1945, before I was born.
A few years later, Ada married Charles Hilyard and they eventually moved to northeast Washington where she died at Spokane during 1977 at age 94.
Byron moved on from Nebraska to Montana where he met and during 1905 at Bozeman married Maude Dusenberry. They settled on a ranch near Rudyard, Montana, where they raised two sons. After Maude's death in 1954, Byron retired to Greybull, Wyoming, where he died on New Year's Day 1960 at age 84.
Of the six, Byron was the only one I ever met --- and I was too young at the time to remember much about his visits to my grandfather, other than the fact he was as immaculately dressed and groomed then as he had been in the 1899 photograph; always wore a pocket watch; and on the fob of that watch was a gold nugget in the shape of a strawberry.
I'm not quite sure why this old photo caught my attention this morning as I stumbled through the living room toward the coffee pot --- and have already dismissed the idea it has anything to do with the nearing 51st anniversary of Byron's death.
But I still wonder what these young people of a century ago would make of their 21st century counterparts and if there would be any similarities at all in their thoughts, expectations, aspirations and dreams.
Posted by Frank D. Myers at 7:08 AM