The regrettable end of Uncle Quiller 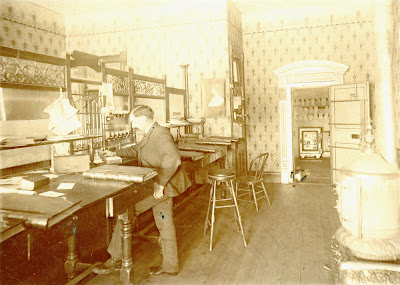 Used to be, vintage photographs of persons unknown (or tangentially related) were consigned to bonfires when the accumulations of attics and dresser drawers were sorted out. That’s no longer the case --- partly because of increased interest in family history, but also because even the unknowns are worth a buck or two at auction or in an antique shop.
I like it better when families hold on to these images, but rarely complain when one lands in my lap as was the case last week when this photo of Uncle Quiller Davis was placed in my custody by Mary Lou, a Myers cousin.
Uncle Quiller (Aquilla Jones Davis) worked in three banks during a career cut short by death so I’m not sure which bank this is. It could be the Bank of Sewal, Allerton State Bank or the National Bank of Seymour (which he helped organize) --- all down the road south of here in Wayne County.
Uncle Quiller was a Russell boy, born 9 January 1865, two years before that town was founded, to Austin R. and Malinda Davis. He had one sister, Harriet. On 9 January 1887 in Benton Township he was married to Minnie Redlingshafer, younger sister of my paternal great-grandmother Mary Belle (Redlingshafer) Myers.
Quiller and Minnie went first to farming down near the Missouri line in southeast Wayne County and their first child, a daughter, was born and died there on 27 December 1887. She is buried in the Greer Cemetery, near their farm, in Clinton Township, Wayne County.
In 1900, he entered the Bank of Sewal as cashier and remained there until 1918, when he moved for a few months to the State Bank of Allerton. About 1919, he moved his family to Seymour and helped to organize the Seymour National Bank, which he served as cashier.
Quiller had become very active in Seymour, serving as school board president, city treasurer, Red Cross chairman, Community Club officer and Methodist Church lay preacher and by all accounts was widely liked and admired.
And then something went terribly wrong and it’s not clear what it was because financial shenanigans do not seem to have been involved.
On Monday, Nov. 14, 1921, Minnie and their daughter, Isabel, left Seymour by train to spend a few days in Des Moines with their son and brother, Earl, and his family. At 4 a.m. on Tuesday, Nov. 14, Quiller telephoned his friend and physician, Dr. A.J. Davis, and told him he was “alone and in trouble.” By the time Dr. Davis reached the house, Quiller had climbed into the bathtub and shot himself in the head with an automatic pistol that continued to fire into the wall of the room after he died.
According to newspaper reports, Quiller left a note behind “stating some of his troubles and some imaginary troubles.”
The third Davis child, Romney, came home from California and the funeral was held at the Seymour Methodist Church, followed by burial in South Lawn Cemetery. A polished black granite family stone and headstone mark his grave, but no other family members are buried there, so Quiller is quite alone on that large lot.
Minnie and her three children all moved to California not long after his death and she died in Los Angeles on 21 July 1943. Romney was the longest-surviving of their children, dying in Santa Monica on 12 March 1993, almost 97. 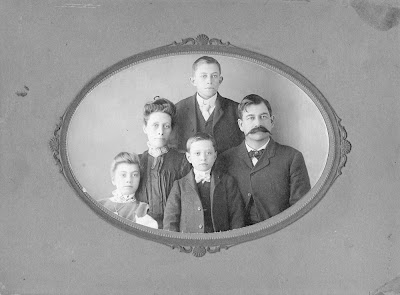 Aquilla J. and Minnie (Redlingshafer) Davis with their three children, Isabel, Romney (front) and Earl
Posted by Frank D. Myers at 8:15 AM