A Dachenbach by any other name 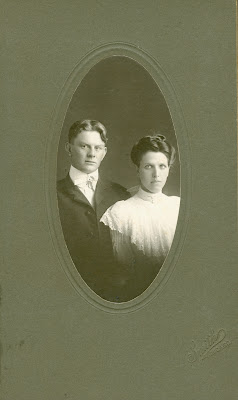 My great-uncle and great-aunt, Orie and Addie (Miller) Dachenbach. They pronounced in the right way, DOFF-un-baw.
Now this is serious. Although tempted many times to address a distressing situation in Lucas County among the Pierschbachers, Steinbachs, Dachenbachs and perhaps members of other old and honorable families of German descent, I have demurred in the interests of family and community solidarity.
While no Pierschbacher, Steinbach or Dachenbach blood flows in my veins, several members of my family have married into these families, fulfillment of a Lucas County truism --- if one is not related to everyone, one is related to someone who is --- so be darned careful about whom you talk and what you say because while that Duckworth may not be somebody’s mother, he or she is most likely somebody’s cousin.
But the straw that broke the camel’s back and pushed me over the edge came this morning when I learned during a meeting that John Pierschbacher, of the Pierschbacher funeral homes, has taken to pronouncing the tail end of his name BOKER --- as in bok choy, with a short “o.” The nerve of some people --- trying to tell us how to pronounce their names, especially when they’re now pronouncing them a little more like the way it looks like they should be pronounced.
We’ve had so much fun over the years watching non-Lucas Countyans struggle with that name, enjoying the tension that builds as they experiment with various mispronunciations, then saying with a patronizing smile, “Oh you mean PIERCE-baker.”
This is an especially insidious development because there now are Pierschbacher funeral homes scattered all across southern Iowa spreading this novel although admittedly somewhat more sensible pronunciation among the masses, spoiling our fun.
+++
The situation among the Steinbachs and the Dachenbachs is similar, although the Steinbachs, with only two syllables, one of them a straightforward “Stein,” isn’t quite as complex. We’ve always pronounced that one “STEIN-baw.” But an increasing number of Steinbachs are now pronouncing it “STEIN-bok,” the bok choy factor again.
Dachenbach, in Lucas-County-speak, is “DOFF-un-baw,” but more and more Dachenbachs now are pronouncing it “DOK-un-bok,” doubling the bok choy factor.
Why is this happening? Personally, I blame in-laws --- some of whom I am related to. Take my late cousin Rose Marie for example. A double cousin on my dad’s side of the house, she married the son of a Dachenbach first-cousin of my mother producing children who are my triple cousins, at the least, in a distant sort of way. Rose Marie, it should be pointed out, was among the kindest, most delightful, warm-hearted and generous people on earth and we all miss her tremendously. But it was from her lips that I first heard the suggestion that the family she had married into did not know how to pronounce its name correctly.
Another cousin may be implicated in the Steinbach shift, but I’m less certain of that and so disinclined to name her. Besides, she knows where to find me if this should by some mischance be called to her attention.
+++
I’m sure the difficulty involved in these pronunciational misunderstandings can be traced to the challenges involved in moving from one language to another during the 19th century.
The Pierschbachers all the way back to Adam (Pierschbacher) pronounced it PIERCE-baker, but Adam’s father, Michael, who brought the family from Germany to Lucas County via Illinois, probably pronounced it a little more like some of his present-day descendants have taken to doing.
The difficulty is that the “ch” at the end of a word in German (this is about all I remember after four semesters of college-level German) is not pronounced as a hard “k,” as we’ve become accustomed to hearing in this country every time that composer guy, J.S. Bach/Bok, is mentioned. Instead it’s a very soft “ch,” almost as in “loch,” occasionally almost inaudible.
It’s just not a sound us speakers of English are accustomed to making, so by the second generation in this country, English-speaking children of emigrants had modified the original pronunciations of all these names in varying ways.
And in the long run, I guess it really doesn’t make any difference but I sure am glad my German ancestors had a simple name like Redlingshafer to deal with. No problem there.
As for me, however, my daddy pronounced it STEIN-baw, my granddaddy pronounced it DOFF-un-baw and my great-granddaddy pronounced it PIERCE-baker --- so I’m not giving an inch.
Posted by Frank D. Myers at 4:11 PM

This post kind of make me wonder how my German Kuck ancestors pronounced their name. The older documents all have the two side by side dots over the letter 'u' which I have no idea what effect that has on the sound. For as long as I can remember, we have always said it to rhyme with the first syllable of the word 'buck-et'. I'm wondering if I should be pronouncing it like 'kook'.

I agree with you on all pronunciation being without the vol. But mostly what I agree with is your description of Rose Marie. Thank you for helping me remember her today.

Bok not vol. From a smartphone, of course.