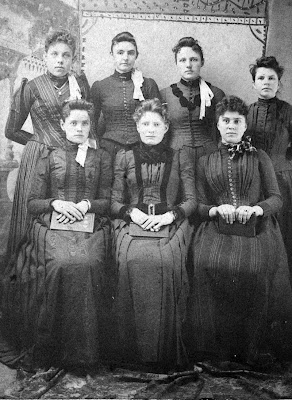 A guy named Rick Maddy wandered into the LCGS library Thursday and I misheard his name as "Matty," which didn't mean a thing. Then "Maddy" dawned in one of those aha! moments and we were on common ground, although there haven't been many Maddy sightings in Lucas County lately.

Maddy used to be a tri-county name --- Pleasant Township in Lucas, Indiana and Washington townships in Marion and Cedar in Monroe --- all joining. Most of the remaining Maddys seem to have Albia addresses, however.

In any case, Rick's name brought this old photograph to mind, since the Ola Maddy in it was a friend of my grandmother. So I went home and got it so he could copy it although he didn't know offhand how Ola was related to him.

I have no idea why these seven young women were photographed together in Columbia, where they all lived, at some point before 1894 (Ola Maddy married John Stotts in that year). Could it be a graduation photo of some sort? The three young women in the front row appear to be holding what could be diplomas. And why are four of the women wearing some sort of ribbon device on their left shoulders?

These young and pretty Columbia girls from at least 115 years ago now, are (seated from left) Rachel May, Mag Askren and Adda McCorkle. Standing are (from left) Ola Maddy, Lula Flanagan, Eunice Caldwell and Jessie Brown (my grandmother). I'm guessing the photographer was Alpheus Elkanah Love, husband of my Great-aunt Laura (Prentiss) Love (Jessie's half-sister), but can't be sure of that because the card is not marked.

Although Rick hadn't lived in Iowa since he was about two --- his family moved to Washington --- there still were plenty of connections to make. I went to high school with his first cousin, for example, and know several of his Thorne cousins. Mumford was another old Lucas County name to which he had ties.

My buddy Darlene got Rick headed down the right track Thursday and I came in a little late, but it was a treat for both of us to be able to help him a little (and Betty Cross chimed in via telephone, too). I'll have more to say about Rick another time. But I've gotta tell you, if they'd run this guy up a flagpole, I'd salute!

Dear Frank,
Just happened across your blog the other day. Excellent! I want to touch on this photo of Ola Maddy you went out of your way to get for me.

John M. Maddy's brother, Charles Wilson Maddy 1832-1909, was a merchant and postmaster at Weller and Columbia, Marion County, IA starting around 1865. The woman, Ola Maddy, in this photograph and according to the genealogy book detailing the Maddy family, US MADDYS, and the information given by you being married to John Stotts is Oliva Florence Maddy b. Oct. 9, 1873 Weller, Marion Co., IA d. April 20, 1910 Rifle, CO d/o Charles Wilson Maddy.

Rhoda (Simmons) Maddy's mother is Anna Barbara Maddy, the sister of John M. Maddy. Anna married Leonard Simmons and they are buried in Indiana Cemetery (I call it by its old name of Indiana Chapel Cemetery).

Joseph and Rhoda Maddy are buried next to my grandparents, John Leonard and Ella Mae (Casner) Maddy, my g-grandparents, Elza V. and Rhoda Irene Bell (Mumford) Casner, and my father, Frank Pershing Maddy 1919-1989, in Zion Cemetery.

To the staff at the Chariton Library my sincere thank you for the help, and you personally, Frank, for the photo, a generous write up about our visit and the help. I hope to be back soon. Sincerely, Rick Maddy

I have enough Rhoda's in my family. Sorry about that slip. My great-grandmother is actually, Irena Elizabeth Bell (Mumford) Casner. Irena was born June 1868 in Otoe Co., NE. My grandmother, Ella Mae Maddy, was named after Irena's sister, Ella F. Mumford. Ella F. Mumford was married in 1881 and she left Gage county with her husband to Maine. Irena was 13 years old and now left alone on the Nebraska plains surrounded by brothers. I can only imagine the sorrow watching her older and only sister go away. Enough so, she named one of her daughters after her. Beatrice, NE in 1881 was a lonely, tough place.

Irena Casner's parents, Ismay and Elizabeth (Malott) Mumford, were pioneers of Beatrice, Gage Co., NE, coming there in July 1857. Elizabeth was the first white woman in Gage county by some historical accounts ["History of Gage County, Nebraska" by Hugh Jackson Dobbs, published in 1918]. A Miss Bailey is said to have come with the party, but she disappears from record; possibly kept moving on or soon left. In the Fall of 1857 Mrs. Catherine Towle came into Beatrice. Beatrice is approx. 125 miles due west of Chariton.

Next to Elza V. and Irena Casner in the Williamson, Lucas Co., IA Zion Cemetery is Irena Casner's brother, John William Mumford. And not far down the slope of the cemetery is John W. Mumford's son, William Waldo "Waldo" Mumford.

Such a great photo! Rachel May was the daughter of James Miles and Susan (Harned) May. Susan was the sister of my great-great grandfather.

I did not have a photo of Rachel, so was glad to see this. She was married in 1892 to Buell Maddy, so I believe it is taken before then. They had two daughters, born 1892 and 1894. Rachel died October 27, 1894 (although tombstone states 1895) death notice was in Chariton Herald Nov 1, 1894. She died of typhoid fever and says she leaves two motherless and fatherless little girls. So Buell died 1893-1894 - unless...they were separated and that caused the "fatherless". The Maddy and May grandparents took one daughter each to raise. Also, Rachel's name on the tombstone is not her married name it is Rachel May. I have not been able to locate more on Buell's death or find a tombstone for him. One undocumented source said he died in 1918 in Manila during WWI. But I find no military records either.