At first I thought I’d call what I hope will be a recurring feature Cemetery Stumble rather than Cemetery Walk. Partly out of deference to the good people across Iowa who work hard to organize, research and present cemetery walks like the one held last Friday in Corydon and coming up at Chariton in September. I don’t plan to invest that much effort. And partly in recognition of my habit of becoming preoccupied in cemeteries with the search, overlooking sunken graves or tumbled tombstones and falling flat on my face. But Cemetery Walk it will be.

The rules are simple: The subject has to be someone I’m interested in, I have to be able to find a portrait of him or her suitable for posting and I have to have visited the grave in person. In most instances I’ll allow obituaries or published biographies to speak for themselves with additional information added when needed to fill the holes. 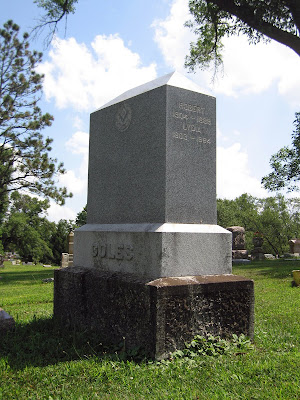 So let’s begin with Robert J. Coles, interesting for many reasons, most of which are mentioned in his obituary, but also for a few that aren’t. For example, his surname really wasn’t “Coles,” but “Cock.” A son of Oliver Cock and Zipporah Coles, not mentioned by name in his obituary, Robert apparently found the name uncomfortable. I would like to think that in those more delicate times its unfortunate associations were with poultry but suspect there always has been a tendency to think anatomically. Some families have solved that problem by altering the spelling a little and becoming Cox.

But by act of the Iowa Legislature in 1853, Robert Cock became Robert Coles (his mother’s maiden name) and the family arrived in Chariton during that year under that new and more euphonious surname. Their last joint appearance as Cocks was the 1850 census of Wapello County, I believe.

There’s also a distant family connection here. Robert’s son, Wilberforce, married my remote cousin, Sarah Elizabeth Boswell, on 23 May 1869 in Chariton three years after she had moved here with her parents, William M. and Eliza Jane (See) Boswell, from their old home near Hogue Cemetery in Washington Township, Wayne County.

After 35 prosperous and presumably happy years in Chariton, Robert died on January 22, 1888. The following obituary was published in The Chariton Democrat of 26 January 1888. A far shorter death notice also was published in The Chariton Herald of that date. Presumably there also was a full report of his death in the Patriot, but issues for this period of the Patriot are missing. Here’s the obit:

Deceased was born in New York City, on August 20, 1804. In 1815 he removed with his father to Ohio. In 1824 he settled in Bond County, Ill., and taught the first free school in that part of the country. Here he was married (to Lydia Hunt, for some reason not mentioned by name in the obituary) in 1826. In 1831 he removed to McDonough county, Ill., where during his three years’ residence he was engaged part of the time in improving land and part in merchandizing in the then new town of Macomb. In April, 1836, he removed to what is now the state of Iowa and settled in Des Moines county. He was enrolling clerk in the first territorial legislature of the then territory of Wisconsin, and afterward a Justice of the Peace and Probate Judge of Des Moines county. He assisted in the first government land sales of Iowa held at Burlington in 1839. During his residence in Des Moines county, he improved a large farm near Burlington. In 1843 Mr. Coles moved to Henry county, where he improved another farm, and in 1846 moved to Wapello county and settled near Eddyville. In 1852 he was chosen to represent Wapello county in the state legislature. April 10, 1853, President Franklin Pierce appointed him Register of the Land Office at Chariton, in which position he served four years with marked ability and integrity, disposing of nearly two million acres of public land.

Deceased has been a resident of Chariton from 1853 to the day of his death. His life has at all times been a singularly active and energetic one, and through all the long years has suffered no stain of dishonor. He has always been one among the first of his townsmen in advocating all measures for the common good. Possessed of a high degree of ability and a natural oratory, he was always in demand on occasions when the power of speech was required, and we presume no man ever lived in the county who has been heard oftener than he.

For the past forty years Mr. Coles has been licensed to preach as a local minister in the M.E. church. His illness has extended over a period of three or four years, during which time he has been confined to his house ever encouraged by the promises of his religion, never faltering in his faith as a Christian. He died as a man should die, after an honorable career extending much beyond the usual limit of human life.

The wife of the deceased has preceded him some two or three years to the grave (Lydia died 8 December 1884). He leaves a large number of descendants to mourn the loss of the grand old patriarch who has been to them as a tower of strength for several generations.

The funeral occurred last Tuesday afternoon, the ceremonies being in charge of the Masons and Odd Fellows, to both of which orders he belonged. Religious services were conducted at the M.E. Church by Rev. W. F. Bartholomew. A large concourse of people accompanying the remains to their last resting place in the Chariton Cemetery.

The obituary does not mention that after leaving government office, Robert was a merchant in Chariton, most of the time a grocer, and farmed in addition to preaching and serving as a free-lance orator. 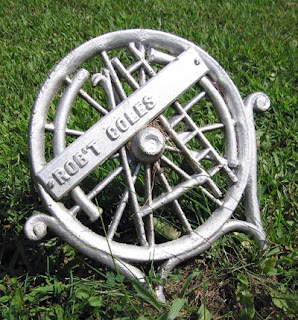 If you’d care to visit Robert, enter the Chariton Cemetery’s main gate and drive straight west. The Coles lot is approximately three-quarters of the way to the west end of the cemetery, right along the drive and distinctive because the family stone is aligned east-west so that it faces you. Inscriptions for Robert and Lydia are on the west end of the stone and their graves are in the west half of the lot. A Masonic emblem is engraved on the front (north face) of the family stone. A Chariton Volunteer Fire Department flag holder marks Robert’s grave individually but Lydia’s grave is otherwise unmarked.

Buried on the east half of the lot are Wilberforce and Sarah Boswell Coles on the north side of the family stone and their son, Thomas A., on the south.


Their son, Thomas A., was born at Chariton 3 October 1873. A locomotive engineer by profession, he was killed on 27 March 1913 at age 39 in Fort Worth, Texas, when the boiler on his engine exploded.

Further reading: More information about descendants of Robert and Lydia (excluding Wilberforce who for some reason was overlooked) and a great deal of information about Robert’s ancestry may be found in a book by George William Cocks and John Cox Jr. entitled “History and Genealogy of the Cock-Cocks-Cox Family” and published privately in New York in 1912. I found it on Ancestry.com.