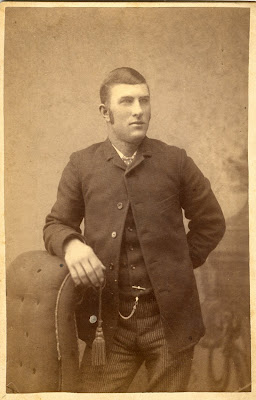 It's not clear to me why my granddad, William Ambrose Miller, had this excellent three-quarters portrait of Henry M. Spiker in his collection of photographs --- but I am grateful that he at least identified it as Henry. The Spikers and the Millers were neighbors in English Township, of course, and Henry was about the same age as Granddad's uncles, Harvey and Rial Miller, so he may have been a friend of theirs. Henry also married Granddad's teacher at Sunnyside School, Barbara Amelia Molesworth, on 26 October 1887. Granddad was 11 going on 12 at the time.

Henry was the second of Joseph Frederick and Adellah W. (Brightwell) Spiker's eight children, born 31 January 1862 in Hancock County, Illinois. In 1875, when Henry was 13, he came with his parents, siblings and maternal grandparents, Richard and Elizabeth (Hagerty) Brightwell, to English Township, Lucas County.

After his marriage at age 25, he and Barbara settled down on a farm near that of his parents and other family members in English Township, but had no children. Like his father, Henry specialized in raising draft and utility horses.

In 1920, Henry and Barbara moved from Lucas County to the Ozarks, settling in Springdale, Ark. About 1930, Barbara fell and broke a hip, something very difficult to recover from at that time. She never recoverd fully and died four years later, on 24 September 1934, nine months after suffering a stroke. She was buried in Springdale.

Not long after Barbara died, Henry's health began to fail. Because he had no family in Arkansas, he returned to Iowa and moved in with his brother, Verne, at Hedrick. He died there of a stroke on 7 July 1936. Rather than taking the body to Arkansas for burial, Henry was placed beside his parents in the Chariton Cemetery.

Thanks for this! Henry's older sister, Martha, was my second-great-grandmother, so I'm pleased to see a portrait of him.