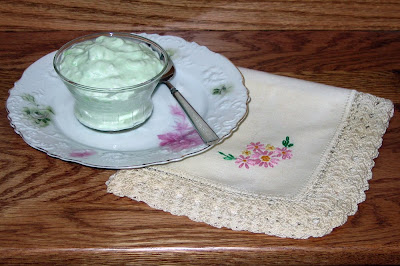 Confronted by a potluck, the sort of event I’ve been known to play single helpless male prior to and mooch, I dusted off the family three-bean and green magic salad recipes and rose above outdated yeast to bake a loaf of bread, inclined to mooch no more. Truth is, I can cook and can even do it well, providing nothing fancy is expected.

Green magic is my favorite, and a potluck staple for so long as I can remember. It’s cool, travels well, tastes wonderful, has a sensual texture, contains jello (it’s not a potluck if there’s not jello) and best of all it has absolutely no redeeming nutritional value. The perfect salad. It’s hopelessly old-fashioned now that the heath-conscious are determined that we all should endure diced or sliced fresh fruit and naked vegetables.

By sharing the recipe here I’m channeling Lucile (Driftmier) Verness, bless her heart --- and if y’all don’t already know all about Leanna, Lucile, Margery, Dorothy (Lucas County’s own) and Evelyn and neighboring on the air from Shenandoah, Iowa --- shame!

Dissolve jello in one cup of boiling water and melt marshmallows in the result, returning pan to stove on medium heat then removing quickly once marshmallows are dissolved. Add three-fourths cup cold water immediately. Set aside.

Cream together the cream cheese and the Miracle Whip and add the crushed pineapple.

Combine the jello mixture and the cream cheese/pineapple mixture, stirring until well blended.

Refrigerate until jello begins to set, then fold in the Cool Whip. Return to refrigerator and cool until firm.

You can substitute a couple of ingredients here if you like --- one cup of heavy cream whipped for the Cool Whip if you’re a believer in all dairy products, but the result won’t be as light; mayonnaise for the Miracle Whip, but the Miracle Whip adds a hint of tartness that complements everything else.

Because I hate to wash dishes, I usually do everything (other than mixing the cream cheese, Miracle Whip and pineapple) in one largish cooking pot. The caution, if you do that, is that jello sets quickly in refrigerated in metal and the Cool Whip does need to be added before it gets too firm.

It was a beautiful day for the St. Andrew/Grace outdoor Eucharist and potluck in a shelter reserved by Bill Gode (God with an “e” he says) on a remarkably pretty and peaceful wooded prow of hillside along the east shore of Corydon Lake. After the rain, heat and humidity of the last couple of weeks, surprising to wish you’d worn something with long sleeves.

And what a treat to have both of those hard-core clerical troopers, the Rev. Sue Palmer and the Rev. Canon Richard Lintner, in one place at the same time. Should have taken the camera along, but didn’t.