A flag for Daniel McDermott 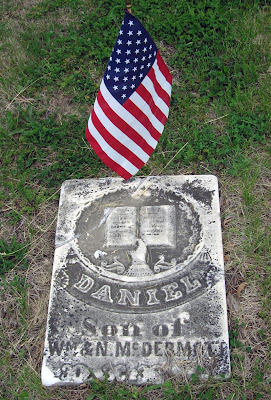 “If other eyes grow dull, other hands slack, and other hearts cold in the solemn trust, ours shall keep it well as long as the light and warmth of life remain to us.”

Gen. John A. Logan, commander-in-chief of the Grand Army of the Republic, set the agenda for Memorial Day with those and other words on the 5th of May, 1868, when he issued General Orders No. 11, directing all members of that Union band of brothers to gather wherever they might on 30th May that year “for the purpose of strewing with flowers or otherwise decorating the graves of comrades who died in defense of their country during the late rebellion….”

Logan said nothing about oratory in those orders, but that too has become standard fare. I’ve listened to a fair share and try to avoid it now. That involves dodging Memorial Day programs. Attempting to express the inexpressible seems to cause the best-intentioned and most worthy of souls to say the darndest, sometimes the most aggravating, things.

So I set off before breakfast for Columbia today, well ahead of the morning program, then cut across country south through the stunning Pleasant Township hills to Bethel with a flag for Daniel McDermott.
+++

Much has changed in 140 years. Old soldiers of the G.A.R. joined their comrades long ago and the scope of the observance has been expanded to include the Confederate dead and all others who have died in defense of U.S. interests real or perceived in all wars before and since that war between the states.

At Columbia, a Confederate battle flag was flying at Nathan Love’s grave --- distinctive among the U.S. flags on other graves.

Decoration Day’s date has been moved from May 30 to the final Monday in May to create a three-day holiday weekend for many; and the day has become for those of us who do such things a secular All Saints and All Souls days rolled into one, the day we decorate the graves of all we have loved or revered or wish to remember, not just those fallen in wars or veterans of them.

For many among the new majority unhitched from place, belonging nowhere, it’s a day to party. I’ve been wished a “Happy Memorial Day.” How bizarre is that?
+++

Iowa lost 13,000 men in the Civil War, an astonishing percentage of the 76,000 Iowans who served. The number who served is astonishing, too. Iowa’s population at the time was 675,000, only 50,000 more than the estimated 625,000 total of Union and Confederate dead. A third of these soldiers died of wounds; most of the rest of disease. The Civil War remains our most costly war and our most divisive.

Few of the 13,000 men Iowa lost are buried here. Nearly all were interred where they fell and remain there, most in national cemeteries, many if not most among the “unknowns.”

So we honor the Civil War fallen as we always have, by decorating the graves of those who made it home. Small U.S. flags are scattered through virtually all of our cemeteries, many beside government-issue stones that are eroded, discolored, askew and in some cases fallen. It’s been a long time. Other wars are newer; other wounds fresher.
+++

Daniel McDermott, commemorated at Bethel, died of disease rather than wounds. Unlike most of his comrades, he receives no honor on Memorial Day. This year, at least, there was a flag.

Daniel, born about 1838, was the eldest child of Cedar Township’s first family, born to Nancy and William McDermott before they left Illinois.

About 1845, he accompanied his parents and younger siblings to Marion County and in the fall of 1847, age about 9, was brought by his father and mother to a log cabin quite near where Bethel Church now stands.

The McDermotts, who called the place where they settled Ireland after William’s place of birth, prospered modestly in Cedar Township and for many years were considered to be Lucas County’s first permanent white settlers although they weren't. That honor goes to Hannah and John Ballard, who arrived a year earlier.

Daniel grew up in Cedar Township and enlisted at age 23, on 18 September 1861, in Co. C, 13th Iowa Volunteer Infantry. Mustered into that unit, commanded by Col. M.M. Crocker, near Davenport a few weeks later, he and his comrades were ordered downriver that fall to Benton Barracks, St. Louis, and then beginning on 11 December were taken by train to Missouri’s capital, Jefferson City.

Although there were Confederate insurgents in the Jefferson City area, there is no record of the 13th engaging them. Instead, disease took its toll, the “men being unused to hardships incident to camp life in winter,” according to a regimental history.

The military made no provision then for returning remains to loved ones and Daniel's remains most likely rest among the "unknowns" at what now is Jefferson City National Cemetery.

Government-issue tombstones, now so familiar, had not yet been thought of when Daniel died, so Nancy and William placed a conventional stone to serve as a cenotaph.

It must have been lovely once, but time has not been kind. First it fell and then it snapped and then it broke again, and again. All that's visible now is the top, inscribed "Daniel, Son of Wm. & N. McDermott."

But the top part of the stone is resting atop the bottom where more is inscribed, including:
Died Dec. 30, 1861
Aged 23 Yrs.
Died in Jefferson City Hospital
while in the service of his country
Co. C, 13 Regt., Iowa Vol. Inf


Perhaps Daniel once received Decoration Day honors, too, and it is the sad condition of his tombstone that has caused him to slip beyond memory. He has no family here --- William McDermott died in 1875 and was buried next to Daniel's stone, but by that time he and Nancy had separated and she had gone west with the remaining members of their family.

I'm not sure what happened to cause Daniel to be forgotten, but it certainly is no one's "fault."

Daniel was no hero. We’ve fallen into the habit lately --- perhaps because of a determination to avoid the indifference shown to Korean War veterans and the hostility shown to veterans of Vietnam --- of calling all who serve in the military in our current wars heroes. Few are. None who are have aspired to be.

Nor, I expect, did Daniel expect to die for us --- just to lay it down. The young, I think, never really expect to die, a reason why old men and women can convince young men and women to fight their wars. But he did. And that is worth honoring and remembering. 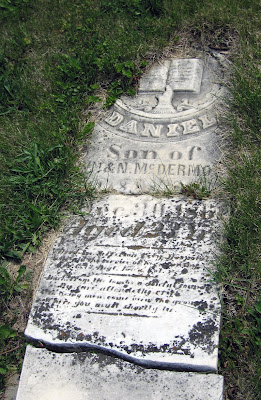 All of Daniel McDermott's tombstone was visible in 2005, when this photo was taken.
Posted by Frank D. Myers at 7:06 PM

I'm guilty I guess of wishing other grave decorators such as myself a "happy memorial day." I wish it in the sense of remembering the good memories of those gone before us.