Travels with my bureau 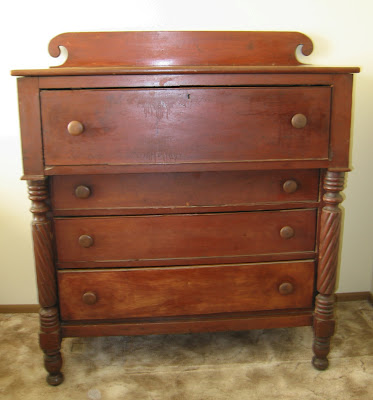 One more furniture story and then perhaps I should move on to other topics. But Great-grandmother Chloe's cherrywood bureau made it home on Friday, thanks to Arian who helped lift and move at the north end and Darrin, at the south.

It was a good day for a drive across Iowa, so the old girl didn't have to be covered as she rested flat on her back in the pickup. I took the slow (55 mph) and scenic backroads route rather than the interstate, figuring that was more appropriate for a piece of furniture that has traveled widely in Iowa during the last 150 years or so but rarely at high speed.

My great-grandmother, Chloe (Boswell) Prentiss/Brown, and her first husband, Moses Prentiss, purchased the bureau second-hand soon after their marriage near what now is Douds-Leando in Van Buren County on 18 March 1852. Since then it's moved around with the family by covered wagon, farm wagon, hayrack, farm truck, tractor and wagon and pickup.

This is not a valuable (in dollar terms) piece of furniture --- there are a lot of similar pieces out there, many of them more elaborate and many in better condition. Our bureau has always been used and the bumps and bangs of each move have added what could politely be called personality. I like to look at it, and use it, but don't especially enjoy moving it --- it's clumsy to manipulate, its rather delicate turned feet may be fragile (I've never tested them) and it's darned heavy.

The bureau probably was made some time about 1830 and its form is called "empire." The craftsman who made it would have been working somewhere east of the Mississippi but I have no idea where. One school of thought holds that it was brought into Nauvoo, then across the river into southern Iowa --- but that's idle speculation since there's no way to prove anything one way or another.

Moses and Chloe even may have bought the bureau in Wayne County, rather than Van Buren, since they moved with her parents, Peachy Gilmer and Caroline (McDaniel) Boswell and a majority of the Boswell family, to Corydon in 1854. Their cabin there was on the south side of Wildcat Creek just north of town.

I've told the story before of how Moses died 11 years later, on 6 July 1865, when the steam boiler used to power the sawmill he was operating exploded, leaving Chloe with four young daughters --- Eva, 10; Laura, 8; Olive, 3; and Emma, 10 months.

Chloe moved in with her widowed mother and younger sister, America E., who lived north of the creek, after that, taking the bureau along. When the 1870 census was taken, Caroline, America, Chloe and the girls still were living together. Next door was Chloe's younger brother, Ellis, who had married Elizabeth Douglas on 1 January 1865, and their eldest daughter, Mary Etta.

In the fall of 1870, 17 November, Chloe married Joseph Brown, 22 years older than she, and he moved in with Caroline and family, too, for the winter. In February of 1871, Joseph and Chloe loaded the Prentiss girls and their belongings --- including the bureau --- into wagons and headed northeast through Lucas County to Columbia, just over the line in Marion County.

Their first stop was a farm south of town near the cemetery, but title to that property could not be cleared so Joseph and Chloe bought 40 acres in the northeast corner of the village's main intersection and a two-and-a-half acre lot in the southeast corner where the house and farm buildings were located. It's not clear who built the house, a trim frame building with four rooms down and two up, quite possibly the first frame house Chloe had lived in since leaving Virginia as a teenager. My grandmother and her older brother, Joe, were born there. The bureau remained in Columbia for roughly 35 years.

By the fall of 1905, only three people were living in that old house: Chloe, widowed again in 1893; her daughter, Jessie; and her granddaughter, Verna (daughter of Emma Prentiss). Jessie had for several years operated the switchboard in the family sitting room that was at the heart of Columbia's telephone system. In doing so, she had met William Ambrose Miller, treasurer of the telephone system in his neighborhood of English Township, Lucas County, who also occasionally operated its switchboard --- located in his family's sitting room. They were married in Corydon on 3 July 1905.

There was no Social Security, other than family, at the turn of the 20th century and when Grandpa married Jessie, Chloe and Verna were part of the package. They moved to English Township to join Will and Jessie --- bringing the bureau along --- in April of 1906.

Will and Jessie did not build their new house just up the road although on the same farm until about 1909, so for three years everyone lived on top of everyone else in the old Miller house --- large for its time, but not that large. In addition to Will and Jessie, Chloe and Verna, the household included his mother, Mary Elizabeth, and younger siblings, James Clair, Easter and Jeremiah. My uncles, Joe and Owen, joined the family during those years.

When the new house was complete --- the first three rooms of it; it gained a second story and more rooms later --- Will and Jessie, Chloe and Verna and the Miller infants, along with the bureau, moved in. This was the bureau's home for roughly 50 years.

By the time I came along and first noticed it, the bureau had come to rest in the northeast bedroom upstairs that had been shared by my mother and Verna, who always was part of the family.

Sometime in the late 1950s, Granddad decided to move to Chariton --- in typical Granddad fashion: He tore down two old houses practically single-handed and built two new ones to keep himself occupied. He and Verna and the bureau, along with an outlandish accumulation of other stuff, moved to town.

But he kept the farm and could never leave it alone. When he was 90, he fell out of an apple tree he should have known better than to climb and soon thereafter his health began to fail. By that time Verna, increasingly incapacitated by the polio that had cripped her as an infant, had moved in with Granddad's sister, Cynthia, and Granddad decided to do that, too. So the house was sold and an auction of most of its contents scheduled --- other than what the children and grandchildren wanted for themselves.

Well, I wanted the cherry bureau. So my dad, in Chariton with tractor and wagon to deliver grain and pick up a load of coal for the return trip to the farm, tied the bureau on top of the load of coal and brought it home.

Our house on the farm was not designed for easy movement of bulky furniture since the enclosed stairway to the second floor made a sharp turn. So anything big headed up there, including the bureau, had to be hoisted to the roof of the front porch and taken in through the front door to the second story. Once in place, the bureau stayed in place there for about 30 years.

In the mid-1990s, however, my mother announced to my father that they were moving to Chariton. Period. And that was that. She also announced that either I assumed responsibility for the bureau or it would go on the auction block. So north it came to Thompson, then from Thompson to Mason City and now back to Lucas County.

Now that's about 10 treks that I can document and goodness only knows how widely the old bureau had traveled before she started moving around with the Prentiss, Brown, Miller and Myers families. She's seen a lot. And I wish she could talk. Since she can't, I've just told you about all I know about her. 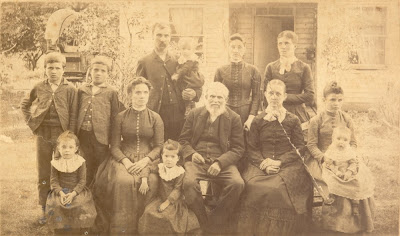 These are members of the blended Brown-Prentiss family photographed (probably by Uncle Al Love) in 1888 or 1889 to the side of the family home in Columbia. Sam and Olive (Prentiss) McCorkle were visiting from their home in Superior, Nebraska, and their wagon is visible by the side of the house. Standing (from left) are Byron Love, Eugene Love, Sam McCorkle holding daughter Alma, Emma Prentiss and Laura Love. Seated (from left) are Ada McCorkle, Olive (Prentiss) McCorkle, Alma McCorkle, Joseph Brown, Chloe (Boswell/Prentiss) Brown and Jessie Brown holding Verna Prentiss/Brown.