A tire that kept wanting to deflate and couldn't be fixed until after lunch derailed me Monday, so I spent some time instead at the Lucas County Genealogical Society library and while there glanced through back issues of "The Van Buren County Genealogical Society Quill," that organization's newsletter. I happened onto (in Vol. 20, No. 2) an article entitled "She Remembers the Great Black Hawk," written by Alex R. Miller and published in The Burlington Hawkeye of 31 July 1921 (Miller was editor of his own Washington (Iowa) Democrat at the time as well). I'm not going to reprint the whole thing here, since it contains a good deal of excess verbage (Miller was both a newspaperman and a politician after all), but only a few exerpts that pertain to the Iowaville vicinity before 1840. 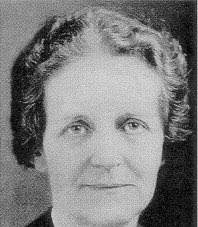 But first a detour: Alex R. Miller at the time this article was written was, as noted, editor of The Washington Democrat as well as a Democratic party activist. For better or worse, however, he inadvertently dropped dead of a heart attack in 1927 after running unsuccessfully for governor in 1926 and receded into the shadow of his wife, the magnificent Ola Babcock Miller (left). Name sound familiar? Look at the signage in front of what used to be called the Historical Building north of the Capitol in Des Moines and note that it's now the Ola Babcock Miller Building.

The Iowa Democratic Party, kind of as a reward for her loyalty and hard work, nominated Ola as its candidate for Iowa secretary of state in 1932 and she swept into office on FDR's tail after not expecting to win. She proved to be an incredibly hard worker and a remarkably astute state official, so had no trouble winning re-election and served until her own death, resulting in large part from working too hard, in 1937.

She is known as the mother of the Iowa Highway Patrol because she campaigned tirelessly for creation of a uniformed highway patrol to increase safety on Iowa roads and simply created one without authorization in 1934 when the male-dominated government moved too slowly to suit her. The next year, authorization was forthcoming and the Iowa Highway Patrol was officially born. She called its officers her "boys" and they responded with affection and respect. She also became George Gallup's (Gallup Poll) mother-in-law.

But that's neither here nor there so far as Black Hawk is concerned.

While in Libertyville, over east of Eldon in Jefferson County, to make a speech, Alex R. Miller got wind of a woman named Lucinda (Betterton) McClain, born 17 June 1831 in Pennsylvania, who had arrived in the "four-corners" region of Van Buren, Davis, Jefferson and Wapello counties with her parents, William G. and Marcy (Gardiner) Betterton in June of 1837, when she was 6 years old and a year before Black Hawk's death. The Bettertons lived in Wapello County in 1850, but are buried in the Iowaville Cemetery, where his grave is marked but hers, apparently not.

So Alex went out to her farm to visit Lucinda, then 90, and visit with her about the old days down by Iowaville.

Lucinda told Alex that "she first saw Black Hawk a little ways below Eldon, about two and one-half miles. She says Black Hawk talked his native language, of course, and a little English, although he had the Indian's taciturnity. He was not much of a talker. He talked English in broken fashion, but could make himself understood very well; and then, the white folks talked Indian, nearly all of them, more or less. She had a sister who spoke Indian like a native. Mrs. McClain knew a great many words, and formerly knew more, but she was never able to carry on a conversation."

After running through a few of the words that Lucinda remembered, Alex went on to report that "she said they settled right in the midst of the thickest of Indian settlements, near the Des Moines river. I asked if the Indians were good neighbors, and she said they could not have been better. They were friendly and neighborly and as kind as white folks, and sometimes better."

"She said the Indians would give them presents of wild honey and deer meat. She said she had seen droves of deer with 25 and 30 at once (keep in mind this was written at a time when Iowa's deer population had been largely extinguished), and wild turkeys by the hundred, and prairie chickens and quails, squirrels and all kinds of wild fruit, plums and blackberries, wild strawberries and crab apples, and everything you could think of."

"Her schooling consists of about three months in a log school house, and her education is very limited, according to her story. I asked her if she could weave, but she says she never learned, although her mother was an expert. Mrs. McClain could spin and the Indians often visited them to watch the women folks spin and weave, but they never molested anybody."

"All of their clothing was home-made, of course, and I asked her where they got their shoes. It happened that her father, William Betterton, was a shoemaker by trade, and he farmed in the summer time and made shoes for the family and for the neighbors in the winter. The first year they were in Iowa her father sowed ten acres into buckwheat. They had a good crop and they ground the buckwheat on a coffee mill and had buckwheat cakes and hominy and lived like kings. They had just as much fun, says Mrs. McClain, as they do nowadays. They had plenty of salt pork and deer meat and wild turkeys, and one winter her father made a trap to catch prairie chickens, and they caught hundreds of them, and they salted down a barrel of them for use the next summer and they were amazingly good.

"Mrs. McClain not only saw Black Hawk, but Keokuk, Wapello, Appanoose, and of course many of the ordinary braves. These were all chiefs, as you know. Black Hawk had two boys and a girl. The boys were named Thunder and Lightning, but she does not remember the daughter's name. I asked if she had ever seen General Street, who you know is buried in Wapello county, along the right-of-way of the C.B.&Q. railway .... General Street was an Indian agent, and he was very popular with the Indians, so much so that Chief Wapello asked to be buried by his side, and if I err not, they are so buried. Mrs. McClain also knew General Street's son, whose name was William, but they called him Bill."

After waxing poetic for a few paragraphs, Alex finally gets back on track to report that "She even remembered to send word to me, after I had left, that she remembers Black Hawk's funeral and how he was buried in a sitting posture. She said he was buried with his favorite rifle lying over his knees and his favorite hunting dog was buried with him so he might pursue his wonted labors in the happy hunting grounds, whither he was bound."

Now Lucinda would have been seven when Black Hawk died, so it's likely that stories from other family members and friends influenced her own memories. No one else that I know of, for example, reported a hunting dog is Black Hawk's grave. But still, I thought the article was an interesting footnote to Iowaville's history.
Posted by Frank D. Myers at 11:35 AM

Thank you very much for writing this post. Lucinda Betterton was a younger sister of my great-great-great-great grandmother Frances Betterton Sloan. Frances had married George Sloan, an Indian trader (possibly working for the James Jordan you mention in another post).

According to stories passed down by Frances and George's children, George and his half-brother Frisby had been captured by Black Hawk somewhere east of the Mississippi and were then adopted into the tribe. George later married an Indian woman and after her death married Frances.

Frances adopted George's youngest son by his first wife and moved to Illinois while he went to the California goldfields. They later farmed in Henderson County, Illinois.

My late great-great aunt and her daughter have spent many years trying to research this period in their family's history and the relationship with Black Hawk. Thank you again for sharing this story.

Lucinda Betterton McClain was my great-grandmother. Her youngest daughter, Mary gladys Mcclain (m. Emery Silas Pearson) and they were my grandparents. They had a son, Leland Emery Pearson, born 1915, and I am his daughter, Judy Pearson. I heard a lot of stories about lucinda McClain which included stories of Black Hawk….and my great g-pa, Joseph Benson Mcclain. Since I have no idea who you are, I will not be able to ever have a conversation, unfortunately. But know we ARE related! :) By the way, my grandma Mary Gladys McClain was 75 when I was born…..and I am now 76 in the year 2021.