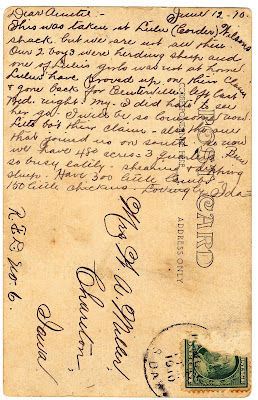 The lazy way out of blogging is to post old photographs --- and I’ve got a million of ‘em, so to speak. I came across this one while looking for something else that I’ll get to later this week, maybe.

The shot was taken during the spring of 1910 near Miller, South Dakota. --- that’s in Hand County in the central part of the state about 35 miles northwest of Huron and 80 or so miles northeast of Pierre.

Quite a few Iowans homesteaded in South Dakota around the turn of the 20th Century, including my grandmother, Jessie’s, niece and best friend, Ida Belle (Brown) Rogers, and her husband, James Gallett (known as “Lett”) Rogers. They were accompanied by Ida’s stepsister, Lulu (Corder) Wilson, and her family.

I believe I’ve written before about just how much Ida hated South Dakota, but agreed to live there after extracting a promise that if she died there, she’d be buried back home at Moulton in Appanoose County --- and that happened far too soon. Ida, who was born 15 April 1874 in Cincinnati, Appanoose County, died in South Dakota on 9 March 1919, just before her 45th birthday. And her body was brought back to Moulton by train for burial.

That’s Lulu in the wagon here, and Ida standing in front of it with Lett behind her.

This photo forms the front of a postcard. Ida’s note on the back is pretty much self-explanatory.

This was taken at Lulu (Corder) Wilson’s shack, but we are not all there. Our two boys were herding sheep and one of Lulu’s girls was not at home. Lulus have proved up on their claim and gone back for Centerville; left last Wed. night. My, I did hate to see her go. I will be so lonesome now. Lett bo’t their claim --- also the one that joined us on south. We now have 480 acres --- 3 quarters. Been so busy lately --- shearing and dipping sheep. Have 300 little lambs, 150 little chickens.