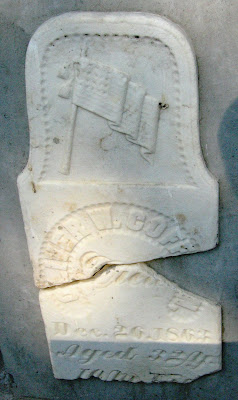 This is what remains of Oliver W. Coffman's tombstone, now located in the memorial area of Douglass Pioneer Cemetery just southeast of Chariton.

Subtitled: More about Douglass Pioneer Cemetery. Among the enduring mysteries surrounding this 5-acre plot of ground just west of the Blue Grass Road (Mormon Trace) southeast of Chariton is who owned it. We're reasonably sure that the area commonly known as Chariton Point was encompassed by what became, after the initial survey, Section 32, Lincoln (originally Chariton) Township. The first to settle there were Mormon pioneers who found temporary refuge along the trail to Utah.

And it probably was within Section 32 that Thomas Braden, who had arrived in the southwest corner of Monroe County during May of 1843, acquired the pre-emption claim of some of these Mormons, occupied the site briefly, then sold the pre-emption rights to William S. "Buck" Townsend.

A pre-emption claim was not a deed, however; merely formal notice that the claimant intended to purchase a specific piece of property from the government (the going rate was $1.25 an acre) at his earliest convenience. Since the land office at that time was in Fairfield, "convenience" took a while. Neither Braden nor Townsend seems to have proved up on his claim. And I haven't yet gotten back to the books of original entry to see who actually did purchase land in Section 32 from the government. That'll take a couple of more weeks.

But I do have copies of the earliest deeds to the land from which Douglass Cemetery was set aside. The initial deed is the first filed for record in Lucas County and is found on Page 1 of Deed Book A. In it, Hugh W. and Esther Sample of Keokuk conveyed for $350 to John Howard of Jefferson County the east half of Section 32 (320 acres). The deed is dated 29 November 1849 and was executed in Keokuk. Douglass Cemetery is located in the extreme northwest corner of this tract of land, but no mention of it is made in the deed. Hugh W. Sample was something of an entrepreneur and there's no reason to believe he ever lived or intended to live in Lucas County. In all likelihood he acquired title to the land as an investment.

On the 12th of February 1852, John and Gracie Ann Howard of Jefferson County sold the 320-acre tract to Ebenezer Badger of Lucas County for $2,000 (Lucas County Deed Book A, Page 92), realizing a tidy profit. Again, there is no mention of the cemetery.

By tradition, the initial graves at the site were those of Mormon pioneers, and when death struck the first permanent settlers of the area, they chose to bury their loved ones near those Mormon graves. Since the site was very close to Chariton itself, it would have made sense to set the area aside, then, as a burial place for the growing city.

Once the supervisors abandoned Douglass and started using the Potters Field section of the Chariton Cemetery or the graveyard at the county home, the resting place of the city's first settlers was allowed to grow up to brush and weeds and largely forgotten. And that's a shame.

Out at Douglass a couple of weeks ago, I took quick snapshots of all the stones located by the Pioneer Cemetery Commission when the site was cleared. These now are mounted in a memorial area on the cemetery's west side.

The U.S. flag carved into the crown of one of those broken stones caught my attention especially. The inscription below reads, "Oliver W. Coff(man), Died Dec. 26, 1863, Aged 32 ys. (age in months and years also was inscribed, but that portion of the stone is broken). Considering the date of death and the flag, it seemed likely that Oliver was a Civil War veteran, so I did a little poking around.

Oliver and E. J. (Elizabeth) were enumerated in the 1856 census as Chariton Township residents, probably living within the city. Oliver, 24, born in Ohio, had lived in Iowa for a year according to the census and was by occupation a painter. Elizabeth,21, also born in Ohio and a one-year resident of Iowa, was a milliner by trade.

By 1860, the Coffman household included Oliver, still a painter, Elizabeth, and presumably their daughter, Dora, age 3. Martha M. Ross, 19, perhaps Elizabeth's sister, was a boarder in the Coffman home.

According to the Ancestry.com online database "American Civil War Soldiers," Oliver W. Coffman of Chariton enlisted 31 August 1862 as a saddler for service in Co. C, 1st Iowa Cavalry. After "distinguished service," he died at home in Chariton on 26 December 1863 "of disease," according to database records.

An Elisabeth J. Coffman, age 35, probably Oliver's widow, married John Alexander, age 52, on 9 April 1867 in Lucas County. Then John and Elizabeth seem to disappear from Lucas County records.Oliver still is with his, although the precise location of his grave has been lost. But so far as I know no flag holder or Memorial Day flag ever has marked his grave and all memories of this man who gave "distinguished service" to his country, then died, seem to have faded entirely. And that's a shame, too.There seems to be no deed in Lucas County records to the "grave yard lot" itself, however. There may never have been a deed, or Ebenezer and Margaret Badger may have executed a deed that never was recorded, then was lost. Since Lucas County continued to use the cemetery as a resting place for those buried at county expense long after most Chariton-area residents stopped using it, the county supervisors obviously felt that they owned it. So the logical explanation would be that the Badgers sold the five acres to the county, but that the county didn't bother to record a deed.
Posted by Frank D. Myers at 8:36 AM