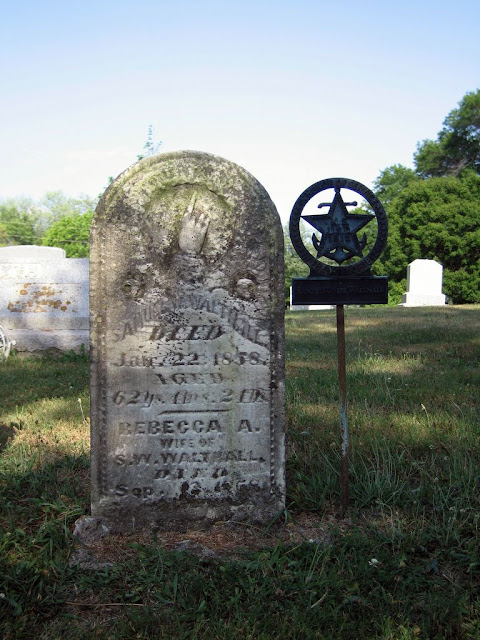 This is the tombstone of Samuel White and Rebecca Ann (Johns) Walthall, moved from Douglass to Chariton cemetery during 1919. Samuel's War of 1812 flag holder is at right.

Douglass Cemetery, located just southeast of Chariton along the Blue Grass Road, seems to have been abandoned entirely about the turn of the century, when Lucas County stopped using it as a potters field and began burying the indigent either in the new potters field in the southwest corner of the Chariton Cemetery or in the County Farm cemetery, just northwest of town. Families who could afford to bury their loved ones in some style had shifted their allegiance many years before to the Chariton Cemetery, established 1863-64.

As Douglass was allowed to go to rack and ruin, some families decided to move the remains of their loved ones. This probably began soon after the new cemetery was established and continued a grave or two at a time until after the turn of the century. It's useful to remember, however, that a vast majority of the Lucas County pioneers buried at Douglass remain buried there in graves now lost.

Descendants of Lucas County pioneers Samuel W. and Rebecca Ann Walthall moved three family members from Douglass during 1919, as reported in The Chariton Patriot of 2 October 1919 within an article headed, "Daughter of the Revolution Here:"

"Mrs. Ethel Smith, of Des Moines, accompaned by her aunt, Mrs. Fannie Walthall Hardin, of Denver, Colorado, were here the latter part of last week visiting the former's uncle, Jay J. Smyth, and attending to business matters. Mrs. Hardin was enroute from Columbus, Ohio, where she attended the national W.R.C. (Women's Relief Corps) encampment. She was a resident of this place many years ago, and she was here for the purpose of removing the remains of her father and mother, Samuel and Rebecca Ann Walthall, and her aunt, Nancy B. Chapman, who was the wife of Joshua P. Chapman, from the Douglass cemetery to the W.H. Smyth lot in the Chariton cemetery. Mr. Walthall was one of the very early pioneers of Lucas County and was buried in 1858, while his sister was buried two years later (actually two years earlier). He was a soldier in the war of 1812, and a bronze grave marker will be erected above his grave by the Society of 1812. This will be the only marker of this kind in the Chariton cemetery. Mr. Walthall was county clerk and recorder of this county about 1854. When he came here he brought with him a land warrant as payment for his service in the war of 1812, and entered the farm adjoining Spring Lake on the south, where he resided for some time."

William H. Smyth, on whose lot the Walthalls were reburied and where their tombstones, also brought from Douglass, were re-erected, had married Ida Malone, a granddaughter of Samuel and Rebecca, on 7 March 1880, Lucas County marriage records show.

Rebecca's inscription, below Samuel's, reads, "Rebecca A., Wife of S.W. Walthall, Died Sept. 12, 1858." Most likely, Rebecca's age was inscribed below her date of death, but the base of the stone was sunk into cement when it was re-erected, so that line was lost.

The War of 1812 marker mentioned in the preceding article is in fact an elaborate War of 1812 flag holder with the name "Samuel White Walthall" inscribed upon it.

The Walthall stone is well preserved and the inscription legible. The same cannot be said for Nancy's tombstone, located just north of her parents' stone. Probably made from a lesser grade of marble, it has eroded to the point of illegibility. 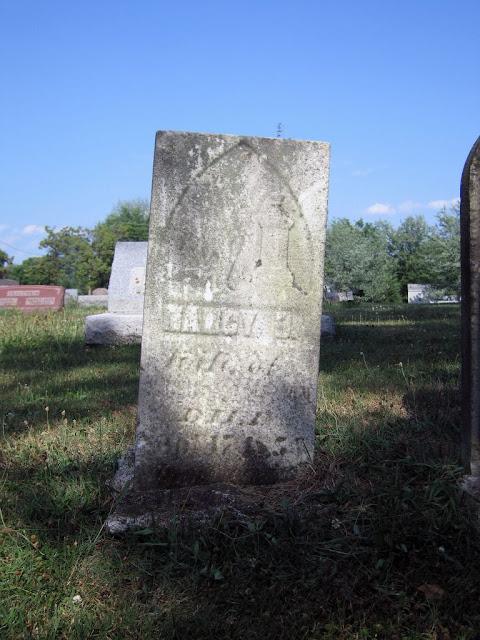 This is Nancy B. (Walthall) Chapman's tombstone, also moved from the Douglas to the Chariton cemetery during 1919.

Lucas County marriage records show that Nancy married Joshua 13 July 1854. His age was given as 21 at that time and hers, as 16.

According to information about this family found within an online GEDCOM entitled, "The Johns Family History Association Genealogies" (most information about the Walthall family attributed to Eugene R. Walthall), Samuel White Walthall was born 29 August 1795 in Prince Edward County, Virginia, and married a cousin, Rebecca Ann Johns (born ca. 1808) in Prince Edward County on 30 May 1822.

The family moved to Hendricks County, Indiana, during the mid-1830s, and on to Lucas County about 1851.

When the 1856 census of Lucas County was taken, Samuel W. Walthall headed Household Nos. 63/66 in Chariton (now Lincoln) Township. His occupation was given as farmer. In addition to his wife, "Rebecka," the household included their children Fanny, Martha and Daniel; their widowed son-in-law, J.P. Chapman, occupation given as land agent, and Cary Chapman, an 18-year-old male who may have been Joshua's brother.

The deaths of Samuel and Rebecca during the same year caused the famly to scatter widely as elder siblings assumed responsibility for the youngsters, then moved west. Lucas County marriage records show that Joshua P. Chapman married as his second wife Mary S. Vance on 10 September 1857, but he was living alone in Chariton during 1860, then seems to have moved on not long thereafter.
Posted by Frank D. Myers at 9:24 AM

Thanks Frank for the photos of my great, great, great grandparent's, Samuel White and Rebecca Johns Walthall's, headstones and the info. I'm descended from their daughter, Susan Edmund Walthall Peck.