A memorial stone for U.S. Army PFC Ellis Hatfield is located at Salem Cemetery, but his body rests with 10,489 of his comrades in the Lorraine American Cemetery near St. Avold.
﻿﻿A small U.S. flag usually flies year-around above the small memorial stone at Salem Cemetery that is a tangible reminder of Ellis Hatfield, one of Lucas County's World War II dead whose remains were not repatriated after combat ended in Europe.
Salem's sometimes shaggy informality is in sharp contrast to the manicured precision of the Lorraine American Cemetery near St. Avold, not far from the French-German border, where Ellis rests with 10,489 of his comades --- the largest American cemetery in Europe. But Lucas County was home, and I think Ellis would like to know that he is remembered here.
﻿﻿
﻿﻿

Ellis Hatfield's memorial stone at Salem Cemetery
Born 24 February 1919, Ellis was the youngest of his father's, Calvin Ellis Hatfield's, family of 14 children, two of whom died as infants. Calvin was married twice, first to Tessie Ann Parsons (daughter of James and Catherine Myers Parsons), to whom four children were born: Pearl, Sylvia, Hazel and Robert D. Tessie died 9 March 1899, the day of Robert's birth, and the little boy followed five months later, on 13 August. They were the first to be buried on the Hatfield lot at Salem.
Three years later, Calvin married Nancy Jane Hawkins, daughter of Wesley W. and Elsie Jane Hawkins. They became the parents of 10 children: Gladys, Theodore, Elma, Martha, Doris, Kenneth, Twila, Merle, Ellis and Lois, who died in infancy during 1917.
The Hatfields were living in Millerton, just across the line in Wayne County, when Calvin Hatfield died 5 February 1932. Ellis was just short of 13 at the time, and moved not long thereafter into Chariton with his mother and siblings.
He graduated from Chariton High School with the class of 1936 and within a year or two married Wilma Moss. They had three sons in quick succession: Melvin, Ellis Dale and Gerald.
As World War II spread across the globe, the family moved to Chicago, where Ellis worked at a defense plant prior to his induction into the U.S. Army on 2 June 1944. Wilma and the little boys then returned to Chariton to live with her mother, Margaret Moss.
Ellis trained at Camp Fannion in Texas and at Camp Meade in Maryland before deployment during late 1944 to the European theater of operations with the 398th Infantry Regiment, 100th Infantry Division, assigned to the Seventh Army in France.
He earned the Combat Infantryman Badge in France, awarded "for satisfactory performance of duty in ground combat against the enemy," a designation that meant $10 more would be added to his monthly pay, sent home to Chariton to help support his family.
And Ellis shared with many others credit for the Presidential Unit Citation awarded to the Third Battalion of the 398th Regiment, then "engaged in some of the most bitter fighting on the entire Maginot Line," the Chariton newspapers reported during early 1945.
The Third Battalion had forced its way into Fort Schiesseck, a key defensive bastion on the Maginot Line, during December 1944 and then went on to participate in the three-month winter siege of the ancient fortress city of Bitche, which fell to the 100th on 16 March 1945, earning special recognition for the courage and tenacity of its men --- and the designation Sons of Bitche for those who fought so gallantly there.
With the Siegfried Line broken and all enemy units cleared from the west bank of the Rhine, the U.S. Seventh and Third armies crossed the river and began the final drive into Germany. On 5 April, in Germany, Ellis was killed. First reported missing in action on 18 April, he was listed officially as killed in action on 15 May, 60 years ago this month.
The official declaration of his death came a week after Germany's unconditional surrender and the end of World War II in Europe.
Because Ellis was posthumously awarded the Bronze Star Medal, we know the circumstances of his death. The citation that accompanied his medal reads in part as follows:
"When the weapons platoon in which Private Hatfield was an ammunation bearer became surrounded by a numerically superior German force, he courageously maintained a steady supply of ammunition at hand for his weapon and then, as the situation grew progressively worse, he started out with a companion to contact a machine gun squad on his flank.
"When they became targets for an auntomatic weapon and his comrade was seriously sounded, Private Hatfield defied the imminent danger and began to carry him to a place of safety. While thus engaged, Private Hatfield was instantly killed by enemy machine gun fire. His valiant and intrepid action is in keeping with the highest traditions of the Army of the United States."
﻿ 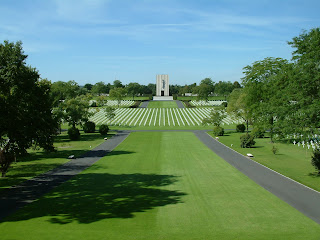 The Lorriane American Cemetery, where Ellis is buried.