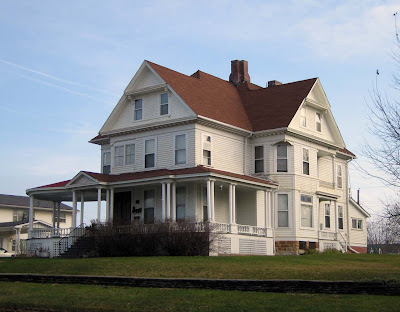 I'm not sure why so many of Chariton's grand old homes (in varying states of repair) are on the market right now, but several are. According to the latest real estate listings in the Chariton newspapers, the old Gibbon-Copeland house at 216 S. Grand (two and a half blocks south of the southeast corner of the square) can be yours for $99,000. And that looks like a good deal to me, although admittedly there may be problems not evident just from looking at its wonderful Victorian exterior. But I'm not in the market for a house, don't have $99,000 to spend on anything and the thought of keeping up something that big just makes me tired. So here's your chance.
The house was built by Dr. W.H. Gibbon and his wife, Laura, during 1895 for themselves, but he soon died and it became the home of their widowed only child, Anna (Gibbon) McCollough, her children and their widowed mother and grandmother. Anna subsequently married Joseph C. Copeland, hence the dual attribution.
Although long since converted top to bottom into apartments, many of the orginal features remain including fireplaces, pocket doors, paneling and a stair in the front hall that ascends into a spectacular flying bay.
Deep pockets? Desire to live in a friendly, picturesque Iowa county-seat town? Go for it! Chariton needs you. Note: The Gibbon-Copeland house has long since sold (as of 2011) and remains in a good state of repair.
Posted by Frank D. Myers at 12:09 PM