Confederates in the attic 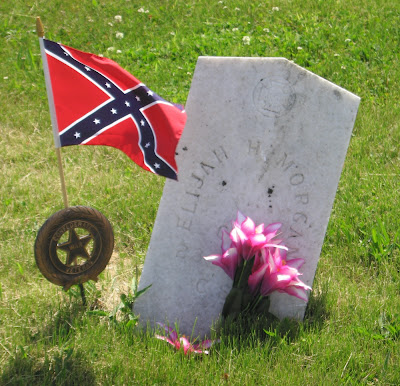 Elijah H. Morgan's CSA tombstone at Salem Cemetery. I'm responsible for the Confederate flag --- and for the lamentable pink silk flowers (why didn't I remove them before taking this photo?).
Start talking about the Civil War in mixed company --- and by that I mean mix folks whose ancestors fought for the Union with those whose ancestors fought for the Confederate States of America --- and you'll discover levels of complexity not evident in most of the history books ("After all, winners write the history books," a friend once reminded me). You might even discover, if you're a damnyankee like myself, that you don't have to go that far south (in some cases, just step across the state line into Missouri, perhaps to the "Rebel's Cove" conservation area down south of Exline in Appanoose County) to discover that the war never exactly ended.
This is probably not the place to launch that discussion. But it's useful to remember that the vast majority of those who fought the war, North and South, were quite similar in background and outlook --- farm and small-town boys for the most part, caught up in and divided by that massive conflict. Had circumstances been different, they probably would have been friends. After the war, many became just that.
After the war ended, a few Confederate veterans settled in Lucas County. Two of them were friends and neighbors of my family in Benton Township, and they're buried together at Salem Cemetery. 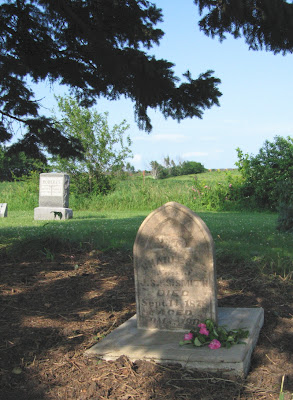 Josiah Smith's grave at Salem Cemetery is unmarked, but he is buried close to his son, Charles, whose tombstone was restored several years ago by Bill Smith of Washington state, a Josiah Smith descendant, who made a special trip to Iowa to tackle the tombstone and trim the big spruce tree that had obscured it.
Josiah "Si" Smith (ca. 1825-16 September 1880) is buried in an unmarked grave at Salem along with his wife, Sarah (Pitts) Smith (30 April 1826-8 August 1911), and several of their children.
According to his descendant, Roberta Tuller, Josiah, a Tennessee native, was a veteran of both the Mexican and Civil War. He enlisted at age 23 on 7 November 1847 for service during the Mexican war and served as a private under Capt. John S. Shavers in Co. C, 5th Regiment, Tennessee Volunteers, until his honorable discharge 20 July 1848 at Memphis.
After the Civil War broke out, Josiah, then in his 30s, enlisted in the Confederate 5th Cavalry on 1 November 1861 at Decatur, Tennessee. Captured twice by Union forces during 1864, he was paroled upon his pledge not to return south of the Ohio River.
Not wishing to return to Tennessee after the war ended, Josiah found a home for his large family near Peoria, Ill., and instructed Sarah to sell everything they had there and bring the children north, which she did. About 1869, the family came west to Lucas County.
The family was living near Derby in Warren Township when Josiah died on 16 September 1880 of typhoid fever.
Elijah H. Morgan, born during the late 1830s in Virginia, was 25 years old when he "went to the old court house in Fawnville, Virginia, and cast his lot with the Southern armies, becoming a member of Company L (apparently it actually was Company I) of the Twenty-Third Old Virginia," according to an account of his 97th birthday observance published 5 November 1931 in the Chariton Herald Patriot.
"Mr. Morgan was at Gettysburg with Pickett and in numerous other encounters with the Union forces," that account continues. "As a member of the ambulance company, he helped to bury the leg of Stonewall Jackson, shot off when the general forgot an order which he had issued.
"Upon the death of the famous Southern General, Mr. Morgan was detailed as a guard of honor at the military funeral."
After the war, Elijah came to Iowa seeking opportunities not available in the South and married Mary E. Clark 19 August 1872 in Van Buren County. They settled first in Warren County, then moved to Lucas.
Elijah died during late March, 1934, approximately a 100 years old, and was bured in Salem beside the unmarked graves of his wife, Mary (10 December 1852-11 June 1918), and son, William "Straighty" Morgan (1875-24 January 1905).
Elijah's tombstone is unique: His is one of the few graves in Lucas County marked with an official Confederate States of America headstone. It's inscription reads, "Elijah H. Morgan, Co. I, 23 Va. Inf., C.S.A."
I generally keep Elijah supplied with a Confederate flag, not the easiest thing to obtain over-the-counter in Iowa. So my old friend R. Webb Cole, a native of Lexington, Missouri --- a lovely and historic little town east of Kansas City on the bluffs above the Missouri and site of the Civil War Battle of Lexington --- picks a few up for me when he's down home. Between us, we ensure that old Elijah's Confederate heritage is recognized.
Posted by Frank D. Myers at 8:01 AM