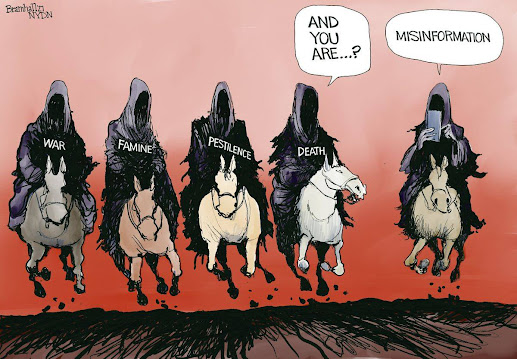 This cartoon by Bill Bramhall for The New York Daily News has been around since mid-August, but it popped up this morning in one of my social media feeds --- and seemed worth considering again.

It is, of course, a 21st century enhanced vision taken from the apocalyptic writings of John of Patmos (incorporated as "Revelation" in the Christian canon) but lifted from earlier references in the Hebrew Bible. In other words, the idea has been around for a long time.

And misinformation always has been with us, too --- it just spreads now universally and at lightning speed, deadly astride its digital steed.

I've been thinking lately a little about a couple of instances of medical quackery that have cropped up here in the south of Iowa in relation to the coronavirus --- and marveling at how eager some are to saddle up.