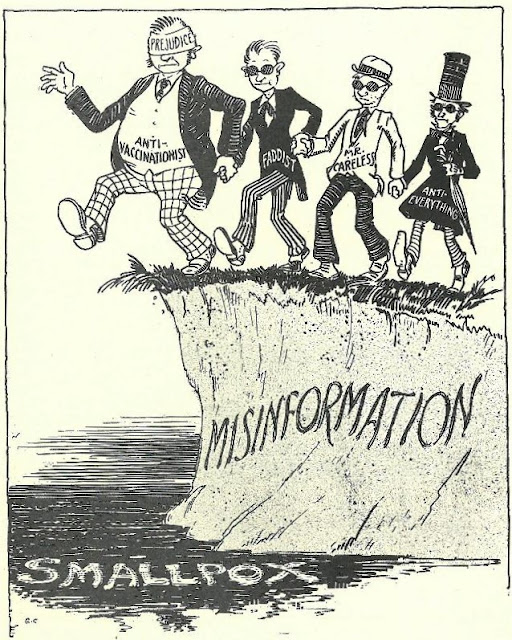 This cartoon surfaced in my Twitter feed on Monday or Tuesday, appropriately enough during a week in which Lucas County Public Health reported the 24th COVID-19 related death among our neighbors here and an all-time high of 57 new confirmed cases during the preceding week. Of the 57, 12 were children and the remainder, adults. Nine were "break-through" cases among the previously vaccinated.

There actually are several versions of this cartoon out there, most vintage and all with the same message but expressed using different characters and in some cases other languages --- so it must have been relatively popular in its time.

This version has been traced to a 1930 booklet entitled "Health in Pictures," published by the American Public Health Association, still an active organization.

Our friends at "Snopes" sourced the cartoon and added the two following paragraphs to its report on the cartoon:

Although the smallpox vaccine was first developed in the 19th century, and the disease was eradicated in 1980, for many years its distribution and use was a subject of controversy. Those who objected to the vaccine often used rhetorical strategies that would later be seen again in the context of COVID-19, as Paula Larson from the University of Oxford’s Center for the History of Science, Medicine and Technology has written.

Those included: minimizing the threat of the disease itself; claiming the vaccine causes the disease itself, or is ineffective against it; claiming that the vaccination program is part of a broader agenda against personal liberty; and citing unreliable, non-mainstream “authorities.”
Several of us on Saturday morning drove through a flag-waving demonstration by a couple of dozen folks along Court Avenue affiliated with a newly minted organization whose agenda reads like a white nationalist laundry list but apparently is driven by reaction to the COVID-19 vaccine.
Ecclesiastes 1:9 popped into my head at the time and that 1930s cartoon affirms it --- “The thing that hath been, it is that which shall be; and that which is done is that which shall be done: and there is no new thing under the sun.”
Posted by Frank D. Myers at 7:19 AM