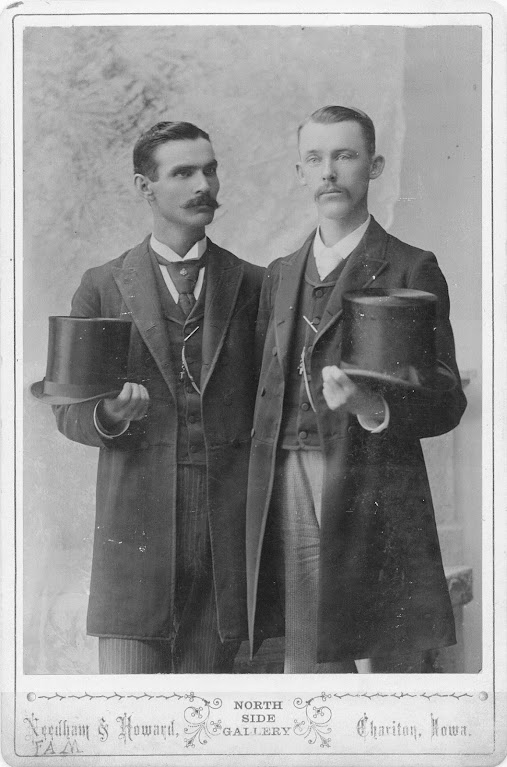 Back in early August, 1891, the congregation of Chariton's First Christian Church (Disciples of Christ) --- small in numbers but mighty in aspiration under a new pastor, the Rev. B.H. Lingenfelter --- erected a large frame tabernacle on the vacant lot north of the northeast corner of the square (now the Pierschbacher Funeral Home parking lot) where it hoped to build a new building. The congregation was housed at the time in an 1869 frame building on South Grand a block and a quarter south of the square.

To conduct the meetings, the congregation imported the Rev. George Franklin Hall (1864-1925), a rising Disciples evangelist then stationed at Emporia, Kansas, and his sidekick, Prof. Edgar Morton Hutto (1863-1934), who provided music and led the faithful in song. The photo here, with Hutto at left and Hall on the right, was taken in Chariton during the weeks those meetings were in progress.

The Rev. Mr. Hall was a very effective preacher, but a somewhat abrasive one --- insisting that the Disciples' Campbellite theological outlook was the true expression of the will of Jesus and that in order to be redeemed one needed to be fully immersed during baptism. This, of course, did not set especially well with Methodists, who generally baptized by aspersion, and others, Protestant and Catholic alike, who tended to favor affusion.

James A. Campbell, editor of The Chariton Democrat, was distressed enough to write the following in his editorial column of Sept. 3:

The editor of the Democrat makes no pretensions to being a theologian, but the position taken by the so-called evangelist who is holding meetings at the tabernacle is so ridiculous that we cannot refrain from characterizing him as a bigot who is at the same time egotistical and ignorant. He believes that salvation cannot be found in any church but his, any more, nor indeed so much, as it can be found in the Board of Trade in Chicago; because they have their interpretation of the Bible written out in what they call a creed; yet a sinner cannot be admitted to the church which he represents without subscribing to his interpretation of the Bible on questions of baptism. 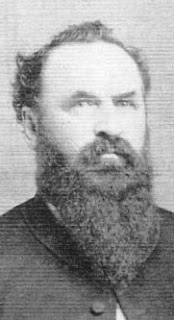 The somewhat divisive nature of the meetings brought them to the attention of other newspapers then circulating in the south of Iowa, including The Des Moines Leader, The Des Moines Register and The Ottumwa Press.

Feeling a bit of heat, the Disciples' governing board invited the Rev. Dinsmore Austin (left), a veteran soldier of the Cross then serving as pastor of Chariton's First Methodist Church, to preach on the topic of baptism from that denomination's perspective on Sunday evening, Sept. 6.

That seemed to be going well --- until the Rev. Mr. Hall arose at the conclusion of the Rev. Mr. Austin's remarks to deliver a sermon of rebuttal not on the original agenda. The Rev. Mr. Austin, having had his say, wisely did not stick around and retired from the field of combat. It must have been a very long evening.

None-the-less, the editors of both The Chariton Patriot and The Chariton Herald seem to have been encouraged. On Sept. 9, The Patriot published the following:

Rev. D. Austin, pastor of the M.E. church, preached an elaborate and able sermon at the tabernacle, on Sunday night, to a large audience. The preaching of the evangelist Hall at the tabernacle has caused some comment favorable and otherwise, but we believe that every honest Christian effort to make the world better should be viewed in the light of a broad charity rather than by criticism and opposition. The Patriot has not thought it best to take note of any disputation as to the doctrine and creeds which has arisen, believing that, in the advancing progress of the teachings of him who taught peace on earth and good will to men that creeds and doctrines, without charity, are but sounding brass and tinkling cymbal.

The Chariton Herald had the following to say in its edition of Sept. 10:

The evangelists are still drawing immense audiences at the tabernacle, and while the community is divided on the doctrines taught, and the manner of conducting the meetings, it is but justice to say that the meetings have excited widespread interest and, considered from the standpoint of numbers, are a remarkable success. We learn that at the end of three weeks, about sixty persons have joined the church. People are attending from all parts of the county, and many from adjoining counties. Sunday afternoon the tabernacle was almost filled with women only, who listened to an address, "What a Woman Can Do," which we understand was highly appreciated. Rev. Austin, pastor of the M.E. Church, preached there Sunday night on "Baptism," evangelist Hall replying the same evening. It is estimated that 15 to 20 hundred were in attendance, many being unable to find even standing room inside. At the close there were twelve additions.

Even the Ottumwa media were encouraged, if this report headlined "How it Looks Abroad" from The Ottumwa Press of Sept. 11 is any indication:

Baptism seems to have become a political issue in Lucas county. Some time since, a frame tabernacle was erected and a young man by the name of Hall has been preaching nightly to large audiences and has secured about sixty conversions. He belongs to the Disciple church and is very outspoken in his interpretation of his faith --- especially on the part which refers to baptism.

Recently, the local democratic organ, edited by a namesake of Campbell himself, and whom rumor says was baptized three times face foremost, attacked Hall's  position in a three column article and committed his party to free trade and baptism by application, and directly following this action was aired through the Leader, the state organ at Des Moines.

Now, to illustrate some of the inconsistencies of politics, ex-Auditor Brown, of the Herald, who has always been a Dry Land Methodist, and had the ordinance performed long before his infant mind runneth to the contrary, accepts the issue, and binds his party to prohibition and baptism by immersion, and an appeal is taken to the Des Moines Register, which sustains Bro. Brown under the circumstances.

While the politicians quarrel over their issues, Rev. Hall invited Rev. Austin to present the other side of the question in the tabernacle on Sunday evening which he did to a large audience. This evened matters to the satisfaction of all, and the editors should now feel that they have graduated in theology.

Of course the Rev. Mr. Austin's sermon did not even things out. We don't know if there was overt hostility on the streets of Chariton, but part of the aftermath was a flood of long and very tedious letters to the editor of The Democrat, the only one of Chariton's three weeklies that was interested in serving as a forum on the topic.

I'll spare you those, but they're available to read on two digital platforms should you be interested.

From a practical standpoint, the controversy helped to fan the flames of evangelical fervor and the meetings themselves were a rousing success. When Team Hall-Hutto departed in triumph for Kansas City during late September they left behind 156 freshly minted Disciples and pledges in excess of $2,700 toward a new building for the sponsoring congregation.

Construction of the new church building commenced as soon as the tabernacle was torn down and the congregation moved into its fine new brick quarters during 1892.

Another great article. Thanks.