Tipple topples and topless Mine No. 4 topples, too 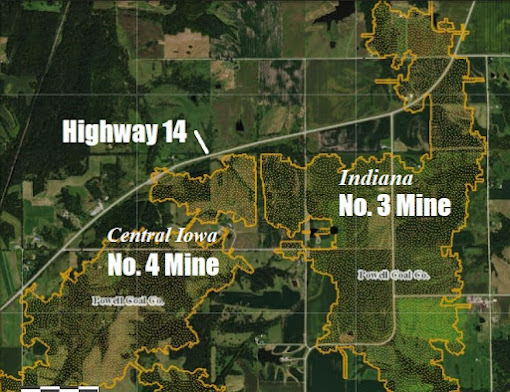 I'm grateful this morning to be able to use the wonderfully alliterative headline "Tipple Topples." This doesn't happen often --- tipples are few and far between these days and they fall infrequently. (For the uninitiated, the tipple is the structure at the head of a mine shaft into which coal is raised and then distributed into rail cars).

But back on Aug. 28, 1941, The Chariton Herald-Patriot was able to publish on its front page a story entitled, "Close No. 4 Mine for good after tipple topples: Cave-in starts; mine was first opened in 1919; employed 300 men."

Central Iowa Fuel Co. No. 4, which opened in 1919, and its neighbor, Consolidated Indiana No. 3, which opened in 1929, were Lucas County's last big coal mines. No. 3 was the biggest and most technologically advanced mine in the state. They were located side by side northeast of Williamson, just south of what now is Highway 14, and few if any traces remain.

Both supplied coal to railroad companies to power steam-driven locomotives, but as World War II approached it had become obvious that strip-mined coal was far cheaper (Lucas County's coal was too deep for anything other than shaft mining at the time) and the handwriting was on the wall so far as coal in general was concerned. Locomotives would be increasingly diesel-driven once the war ended.

No. 4 also was the mine that, if I'm remembering correctly, reached the northwest corner of my mother's family farm some distance to the south before it ceased operation.

Anyhow, here's the text of the story about the tipple's topple:

Central Iowa Fuel Co. Mine No. 4, northeast of Williamson, is closed for good. The tipple --- headstone of livelier days --- fell over this week because of a cave-in and mining operations in that once-booming Lucas county mine are no longer possible.

Mine officials have seen the closing of No. 4 coming for some time, however. The men quit work April 2 of this year at which time the motors were taken out of the mine and operations there virtually suspended.

A few of the miners had stayed on, however, hoping against hope that the mine would be re-opened. But such was not to be. Last Monday, Bert Powell, who has been running the mine, was on the grounds when the tipple fell over.

For some time the ground had been cracked where the mine tunneling forming a network underground was being filled by a cave-in. As the ground settled, the tipple was shifted off balance and fell, raising huge clouds of dust and ending mining forever at No. 4. Part of the metal parts of the tipple fell into the shaft.

The shaft for No. 4 mine was sunk in 1919 and the mine reached its peak in the 1920s when more than 300 men were employed there. Much of the coal mined there was sold to railroads although the mine was not owned by any railroad.

As the demand for coal slacked off, the number of miners employed at the mine has steadily dwindled until only a handful were still working there when the mine closed in April.

Indiana No. 3 was sold a year later, during the fall of 1942, to the Powell Coal Co., but no longer had railroad contracts and such mining operations as remained were on a small local scale. It closed entirely during 1954 --- a small-scale mining operation couldn't maintain the infrastructure of a huge mine.