King of Jazz and his bride were just passing through 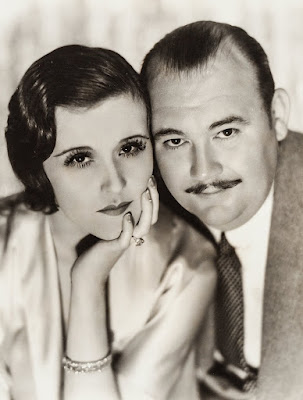 Back in 1931, when giants still roamed the land, trains remained the principal means of long-distance travel and Paul "The King of Jazz" Whiteman was among the most popular of U.S. orchestra leaders. So it was big news when his engagement to Margaret Livingston, described elsewhere as "one of the screen's wickedest and most alluring vamps," was announced. That's the happy couple at left.

It was especially big news in Chariton when the pair passed through aboard a Burlington Route fast train on Monday, Aug. 17, en route from Chicago to Denver, where their marriage was to occur. There was no interview --- the couple had rebuffed a photographer in Ottumwa --- but someone affiliated with the Chariton newspapers apparently visited them in their stateroom and prepared the following report for publication in The Herald-Patriot of Aug. 20.

The "King of Jazz," none other than Paul Whiteman himself, and his bride of Tuesday afternoon, the red-headed movie actress Margaret Livingston, passed through Chariton Monday evening on the Burlington Train No. 9 en route from Chicago to Denver, where they were married.

Although train travel these days is rather warm, Whiteman and his bride-to-be did not seem to mind it, at least they did not attempt to venture from their stateroom aboard the coach.

Few in Chariton knew of the presence of the "King" on board the Burlington fast train and consequently his reception here was a small one.

Miss Livingston was attired in pajamas, her golden hair encircled with a bandeaux. She moved leisurely about the stateroom puffing a cigaret. Whiteman sat at a window, the shade drawn to separate him from curious eyes.

The  famous pair had previously rebuffed a newspaper photographer at Ottumwa with the complaint, "Can't a public man have any privacy?" and consequently no interview with the altar-bound couple was attempted here.

Whiteman and Miss  Livingston arrived in Denver Tuesday afternoon and heard the marriage ceremony pronounced over them at the home of Whiteman's parents, Mr. and  Mrs.  J.J. Whiteman, just outside Denver.

After a few days, Whiteman will return to Chicago where his orchestra is filling an engagement. Then, Miss Livingston said, they will go to Hollywood, where she will resume her work before the camera.

Unlike many celebrity marriages, The Whitemans' endured until his death in 1967. Miss Livingston retired from the silver screen in 1934 to devote her attention to raising their four adopted children. She then devoted her attention to investments in oil and real estate until her death during 1984 at the age of 89.