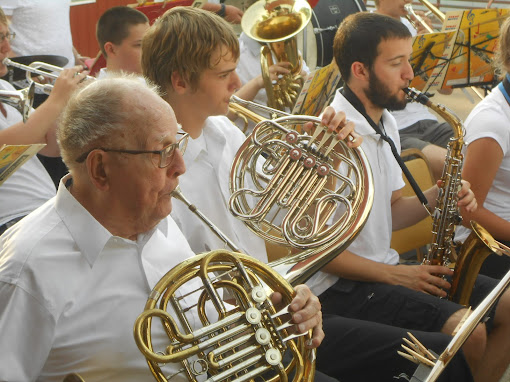 I'm happy to report that music will return to the Lucas County Historical Society Museum on the evening of Thursday, July 8 --- a week from today --- courtesy of Chariton's Community Band, directed by Diane Tordoff. This will be the first event at the museum since 2019 and all are welcome.

Doors to buildings on the museum campus will open for tours at 5:30 p.m. The concert will begin at 7 p.m. on the lawn of the Stephens House. Free popcorn and ice water will be available. Those who attend are asked to bring their own lawn chairs when possible.

Sadly missing from this year's lineup will be the late Harlan Ranshaw, a veteran performer whose final season with the band, with his french horn, was 2018 --- when the photo here was taken during that year's concert at the museum. Harlan died June 13 at age 95 and will be commemorated during the band's Saturday, July 3, concert --- beginning at 11 a.m. in the Larry Clark Bandstand on the courthouse lawn. A memorial service will follow at 1 p.m. at First Lutheran Church.

Circumstances have caused a number of changes in the usual arrangements for a concert at the museum. A vehicle accident two weeks ago involving a museum guest attempting to turn around on the patio resulted in severe damage to museum entrances from the patio. Nothing inside the museum was damaged.

But as a result of the accident, we can't use those entrances and therefore must close both the lower-level Mine Gallery and the Crist Gallery until major repairs are complete, hopefully later this summer.

Ordinarily, we would serve peanuts freshly prepared in the Piper's roaster --- but the roaster, while not harmed, is located too near the damaged entrances to be used.

So that's why the concert, usually held on the patio, has been moved up to the Stephens House grounds and why we'll be serving popcorn rather than peanuts. We're planning another event for the fall and hope that by then the damage will be repaired.

In case of rain, the buildings will open as scheduled for tours, but the concert itself will be moved to inside the Pioneer Barn.

The museum now is open to guests from 1 p.m. until 4 p.m. Tuesday through Friday and at any other time by appointment. Admission, as always, is free --- although donations are appreciated.