Diogenes & the hobo life at Chariton in July 1931 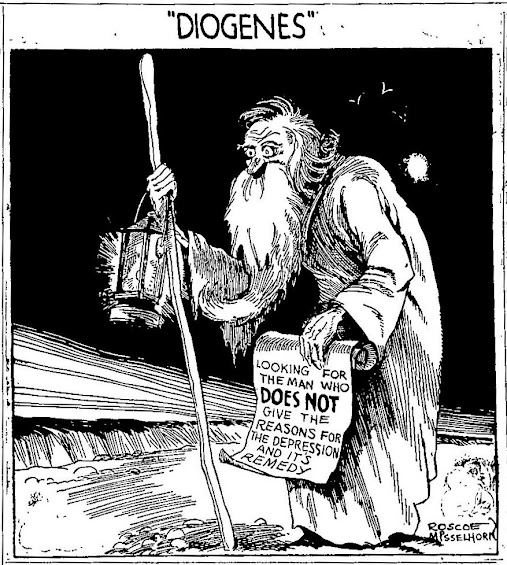 The Great Depression was in what generally is considered to be its second full year on July 9, 1931, when this editorial cartoon was published on the front page of The Chariton Herald-Patriot.

The reference is classical --- to Diogenes the Cynic, who reputedly wandered ancient Greece with a lantern in search of an honest man. Curiously, more Chariton newspapers readers would have understood the reference in 1931 than 2011.

I'm guessing that the cartoonist was referring to the volume of theories about what was causing the economic depression and the number of proposed ways to end it --- when, in fact, no one had much of a clue.

One symptom of the depression in Chariton was a sharp uptick in the numbers of hoboes who used freight trains on the east-west Burlington route and the north-south Rock Island road as their principal means of transportation. And Diogenes himself, after all, was a hobo --- homeless, sleeping rough in a large ceramic jar.

So it was appropriate that two reports about consequences of the hobo way of life also appeared on the front page of that edition of The Herald-Patriot, one headlined "Four hoboes lose new shirts and get scare in laundry robbery" and the other, "Hoboes hurt bumming a ride." Here are the reports:

Four hoboes pounded hasty feet outward bound from Chariton Wednesday evening with an imaginary posse hot on their heels. The boys didn't wait for the convenience of a passing freight. They started on foot with their future address anywhere away from Chariton.

Wednesday afternoon, a bundle of laundry was taken from the porch of Harry B. Stewart on Auburn avenue. H.N. Smith, deputy sheriff, was summoned and made an investigation of the crime.

Simultaneously, four hoboes near the Burlington yards flashed out in new white shirts. When Deputy Sheriff Smith and his force appeared, they readily accompanied the officers first to Kestler's laundry, where the shirts were removed, and then to the county jail where they remained for a short time before they were released.

Frank Kestler, owner of the laundry, refused to file charges against the men and after a severe "scare," the jail doors opened and the four men went scurrying on their way.

Both men were riding on a Burlington freight train and were allowing their feet to dangle out the side of the car when the passed the narrow bridge near Afton. The abutment on the structure raked the feet of the men and bruised and lacerated them seriously. The two men were saved from death under the wheels when they were caught by companions as they hung precariously on the open door of the car after striking the bridge.

The men were brought to Chariton and they were given first aid treatment by a railroad surgeon. They were taken to the county farm where the kindly matron, Mrs. W.C. Synder, gave them their first square meal in weeks, they said.

Dr. Lazear Throckmorton, of Chariton, was summoned and treated the men late Thursday afternoon. The feet of both men were badly crushed and it will be several weeks before they will be able to leave the county farm.

The two men are the eighth and ninth "free" passengers to suffer serious injury on the Burlington over this abutment. The injuries sustained by the men are always the same with broken bones in both feet.