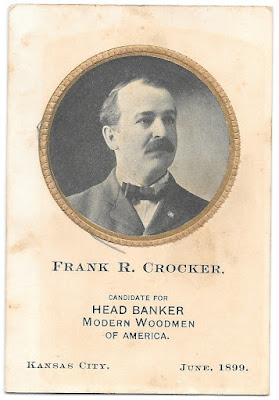 I ran across on Tuesday this little piece of ephemera tucked into a photograph slot in one of the vintage photo albums in the Lucas County Historical Society collection. It's business card size, printed on two sides, and is a promotional hand-out commissioned during 1899 by Frank R. Crocker, then cashier of Chariton's First National Bank.

At the time, Crocker was running for the post of head banker of Modern Woodmen of America, a huge fraternal benefit society headquartered in Rock Island, Illinois (then and now), that offered (then) life insurance to white males in 12 Midwestern states, including Iowa --- where the association had been founded in 1883.

The society had so many members in Lucas County during 1899 that they were able to commission a special train from Chariton to carry them to the national convention, held during June of that year in Kansas City, where Frank was duly elected.

Frank's term of service, a year, was limited by rules of the organization and there's no reason to suppose that he carried out his duties in any way that was not honorable even though he had access to the organization's vast cash reserve. 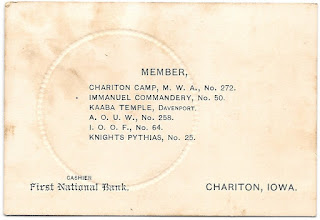 But fast forward to 1907 and it will become evident that the society's rather casual approach to huge amounts of cash could prove hazardous to its financial wellbeing. Head banker that year was Mason City's Charles H. MacNider, another prominent Iowa banker whose principal memorial these days is that city's Charles H. MacNider Art Museum, endowed by his family.

Back in Chariton during 1907, Frank was busy speculating (illegally but at first successfully) with First National Bank funds. He called upon his old friend, Mr. MacNider, who engineered a "loan" of $350,000 in Modern Woodmen of America funds to First National that Frank used feed his habit.

That all came crashing down on the morning of Oct. 31, 1907, when it was discovered that Frank's speculative career had ended in financial disaster and that he had killed himself overnight with an overdose of morphine. The bank doors were sealed as federal regulators took over. It would be years before the county recovered fully from the debacle.

Lucas County had a $50,000 cash reserve on deposit, for example, and countless other depositors large and small lost their life savings. But the biggest loser was the Modern Woodmen. Eventually, $25,000 of the original $350,000 was found stashed in a Chicago bank --- but that was all that remained.

Banker MacNider claimed that his "investment" in First National was protected by a $400,000 bond, signed by the nine prominent Lucas Countyans who formed the bank's board. It turned out, however, that Frank had forged the signatures on the bond and that it was worthless.

Finally, after regulators had spent years squeezing every possible dime out of remaining bank assets and wrestling with the bank owning Mallory family for ownership of all its assets in Lucas County, the Modern Woodmen recovered in excess of $100,000 of its original $350,000 investment and other depositors received similar percentages of their deposits.

Mr. MacNider faced a variety of accusations, even threats of lawsuits from within the Modern Woodmen organization, but  he proved to be bullet-proof and remains widely revered in Mason City.

Lucas County has for the most part forgotten Mr. Crocker by now --- his physical remains were whisked away to Minneapolis where the family had a summer home to which the remaining Crockers repaired after his death. But we do have this small card to remind us.

Very interesting. My family moved to Russell Iowa around 1851 and many of them are buried in the area cemeteries. Among the many items passed down to me is a Modern Woodmen of America member's badge from Camp 5733. Unfortunately I am not sure which family member was the member of this Camp. I have written to the Modern Woodmen of America and they have no records so I am hoping you have any records for Camp 5733 which will help me know which family it belonged to.
Thanks in advance - scottsml@aol.com