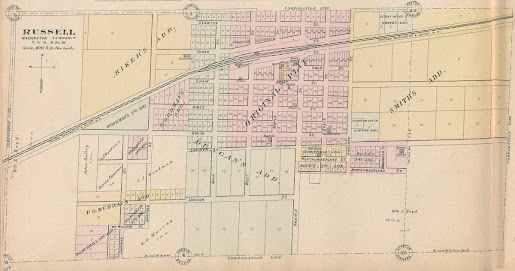 This is the first installment of Susan Day's "History of Russell," written by that career educator and "most industrious woman," as she was described in her obituary, as a paper to be read during the 10th annual Russell Fall Festival, held on Oct. 8, 1914.

It was subsequently printed as a small booklet and then, during 1932, as Russell was preparing to mark its 65th birthday during that year's October Fall Festival, Russell Union-Tribune editor and publisher Harry A. Wilson bought the publication rights from Miss Day and it became the centerpiece of an anniversary edition of the newspaper.

Although Miss Day (1854-1936) was born in Illinois, she arrived in the neighborhood of what became Russell during 1856 with her parents, William B. and Charity Day, and Russell was home for the remainder of her life.

The history is rather long, so I've divided it into installments and will share the remainder in future posts, most likely interspersed with other stuff. The map, somewhat askew because of the way the original was digitalized, is from the 1896 landowner atlas of Lucas County and the image of Miss Day, from the 1932 historical edition of the Union-Tribune.

Fifty years ago, the land upon which now stands the pleasant little village of Russell was a prairie covered by a heavy growth of wild grass and wild flowers. Many farm houses were dotted over the surrounding country but this locality, parts of sections five and six, Washington township, Lucas county, Iowa, was uninhabited. West of here lived the families of William Maple, Hugh Larimer, Noah Threlkeld, Joseph Youtsey, Jeff Adams, Elijah Hatcher, George Thrall and William Day.

In 1864, William Nelson built the first house in what is now Russell. It stood in the northwest part of the village across the street west and a little south from the property now owned by Harry Latham. This was the only residence in the immediate vicinity when, in 1865, the permanent survey was made for the railroad.  In 1866, the grading for the road was carried forward as rapidly as the work could be done at that early day. When extremely cold weather set in the grading was finished to a point about half way between Melrose and Russell, where the winter was spent by the laborers, and early in the spring of 1867 the work was resumed and the track laid. The first passenger train to run over the road was on July 3, 1867.

When the track was laid, the company bought thirty acres of land of William Nelson, at ten dollars an acre, upon which was to be built the town. The first depot was built that spring on the south side of the track, north and a little east of where the hotel now stands.

The original town was platted by H. S. Russell, trustee for the owners of the land, on the 8th day of October, 1867, and contained two hundred and nine lots. It was laid out somewhat irregularly in order to conform to the direction of the railroad through it. On March 3,1869, the gentleman platted nineteen more lots, averaging about three acres each, in the northeast corner of section six and the northwest corner of section five and this was called Smith's addition to Russell. On the 9th of May, 1877, Colonel Warren S. Dungan, of Chariton, being owner of the land lying west and south of Russell, surveyed and platted it into lots, and called it Dungan's addition. It is located on the west half of the southwest quarter of section six, and contains seventy-eight lots, a number of which are two and one-half and five acres. A.J. Woodman platted land in the west part of town into thirty-five lots, and called it Woodman's addition. In 1891 Riker's addition was platted in the northwest part of town, also Boyd's addition in the south part of town. About 1898, P.O. Murray surveyed and platted fourteen acres in the southwest part of own into thirty lots and called it Murray's addition. In April 1903, J.F. Stoops platted the forty acres east of town into seventy-six building lots and eight lots of two and one-half acres each, and called it Fairview addition. the incorporated town of Russell at the present time is three-fourths of a mile from north to south and one and one-fourth miles east to west.

The first lot sold after the town was patted was the east half of the block lying south from the depot. It was bought by Rev. Joseph Maple for twenty-five dollars. He afterward sold it to George Plotts for two hundred and fifty dollars.

Dennis Foley was the first section foreman, and in the summer of 1867 built the first residence in Russell, on the lot now occupied by Huston's livery barn.

In this same year, an Episcopal minister, Doctor LaBach (Rev. Isaac P. Labagh), of Chariton, came to Russell and began preparations for the building of a church house, which was completed in the spring of 1868. It stood where the residence of Mrs. George Miller now stands. The same summer he also built a residence which is now the Campbell property.

That same year, 1868, a new depot was built where the present one stands, and the old one was sold to a Baptist minister, Rev. Livermore, who began fitting it up for a church house, but he soon came to think the location undesirable, so he sold it to George Boggs and George Plotts for a grain depot.

When the railroad business was established in the new depot, they put in a telegraph office, which they had done without until this time. The same summer the first sock yards were put in by the railroad company a little west of where the mill now stands. The scales upon which all stock sold were weighed were put in by William Fulkerson in the northeast corner of what is now the Curtis property, and he had  lots for stock just west of them. A short time after this, the railroad stock yards were moved to the block east of the depot and on the north side of the track, and in 1909 they were moved east of town to the present location.

Soon after the first depot was built, in 1867, the agent, N.B. Douglass, was made postmaster and a post office was established in the depot, and Douglass and H.W. Elliott brought on a stock of general merchandise and started a store in the depot. The first store building erected in Russell was built by H.W. Elliott in 1869, across the street south from where the depot now stands. About the same time, a small building was erected just east of Elliott's in which Holman and Young ran a saloon.

The first Fourth of July celebration held in Russell was in 1868. In 1870, the Russell Union Agricultural Society was organized, of which Elijah Allen was president. A large part of Lucas, Monroe and Wayne counties were represented. For two years meetings were held at Russell, and were considered a great success, a large amount of money being distributed in premiums. Except for the one item of fast horses, it quite eclipsed the county fairs; but having no good grounds upon which to conduct the meetings, the society was allowed to disband.

About the year 1870 the Irving Literary Society was organized and carried on very successfully for several years. It had a strong membership, and met every Saturday evening. There was a literary programme, a debate, and every two weeks a newspaper was read, to which each member of the society was supposed to contribute some item or article of interest. It was greatly enjoyed by all, but as such societies usually do, it finally died a lingering death.

In June, 1874, the Russell Musical Association was organized, its object being the cultivation of musical talent. It was a very popular society, having a membership of about seventy-five. They met each Saturday evening and studied music and sang under the leadership of I.N. Davis, James Jones, the station agent, and J.B. Ferguson. In November 1875 they held a musical convention in which ninety persons took part. The convention was held November 25 to December 3, 1875, J.B. Ferguson having  charge and being its leader. It closed with a concert at the Methodist church. After this concert, the society disbanded.

The first school taught in Russell was in the summer of 1869, by Miss Julia Scott. It was taught in a building erected for a residence on the lot where the blacksmith shop of E.C. Lewis now stands. In the winter of 1869-70, James May taught in the Presbyterian church building, which was enclosed but not completed. In 1872, R.R. Fogg erected the first school building in Russell, a wooden structure, upon the same grounds now occupied for school purposes. The winter of 1873-74, Andrew Day taught in this building, which in a few years became too small to accommodate the children of the village,, and in 1885 an addition was built to it, the same size as the original structure. This was used for school purposes until the year 1898, when the first brick school building was erected. In 1913, the present structure was erected.