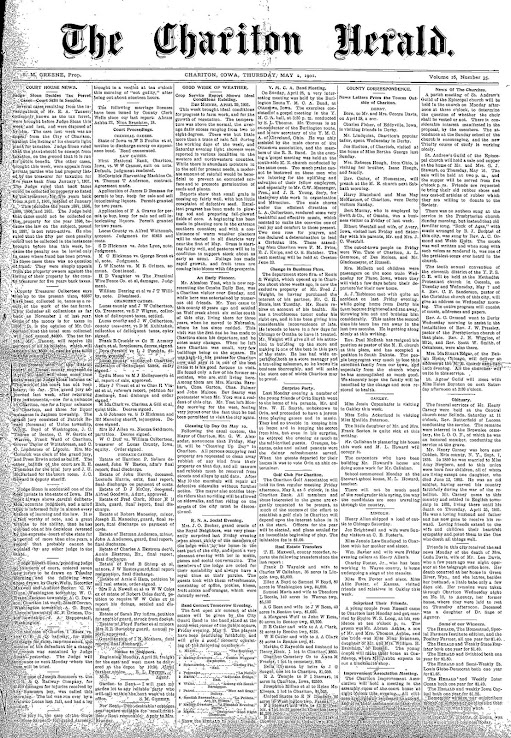 Sam M. Greene purchased The Chariton Herald from Robert W. Bruce during April of 1901 and published his first edition --- shown here --- as editor, publisher and "proprietor" on May 2.

Born in Pennsylvania during 1873, Sam had drifted into the newspaper business as a very young man and during 1899 married Vesta Lisle, daughter of Charles A. Lisle, editor and publisher at the time of The Clarinda Herald.

Casting about for opportunity in the field, he spotted The Herald --- then located in the building on North Main Street that now houses the Hurribak Club --- and seized it, moving his family to Chariton. The Greenes remained for a full decade, departing during 1912 for the greater Los Angeles area after being overcome by "California fever."

Forty-five years later, after reading a copy of The Herald-Patriot's centennial edition, Sam shared some memories of those years in the form of a letter to its editor, Brace Owings, which then were published in that newspaper's edition of Oct. 31, 1957.

There's no reason to doubt the general accuracy of Mr. Greene's memories, but he did make a few miscalculations. He did not purchase The Herald in 1900, as stated in his memoir, for example, but rather during the next year. Here's the text:

INGLEWOOD, Calif. --- Since reading the Herald-Patriot centennial edition several times, as it was so interesting,  thought a few more anecdotes of early Chariton, during the years we lived there, from 1900 to 1912, might be interesting.

The mention of the Beardsley Mortuary recalled to me that Sam Beardsley, who started the Mortuary, learned the undertaking business under Nick Melville. Nick was also head mogul of the K.P. Lodge, and presided at my initiation into the Lodge when we lived there. Mrs. Beardsley is now operating the mortuary since Sam died, in the big house south of the southeast corner of the square that was Frank Crocker's home when we lived there.

Frank was a big shot in Chariton, socially as well as financially. He was president of the First National Bank, at the northwest corner of the square, and was also national treasurer of the Modern Woodmen of America, and kept their treasury funds in his bank. There was about a million dollars in the M.W.A. treasury and Frank very foolishly began using the fund to speculate on the Chicago Board of Trade. In a market slump, he lost almost the entire million, and rather than face his disgrace, he committed suicide at his home one night, by taking poison.

His tragic death was a tremendous shock to Chariton, and when the Government closed his bank, because of the big loss, the depositors finally got only about thirty percent of their deposits. I was probably the only depositor who didn't lose any money, as I happened to be overdrawn about $17 on the day the bank was closed.

We lived in a house we had bought a block north of "Buzz" Larimer's corner on East Auburn, in northeast Chariton. Our oldest son, Paul, was born when we lived in Clarinda, before I bought the Herald in Chariton in 1900, but our next two children, Loren and Doris, were born in that house in northeast Chariton. There was no hospital in Chariton then, so babies had to be born at home. Dr. Theodore Stanton, who lived near Buzz Larimer on East Auburn, was our family doctor.

SPEAKING OF EAST AUBURN Ave., W. G Brown, who was one of the trustees with me in the Methodist church, built the big mansion that later became the home of Harry Stewart and his family. Mr. Brown was wealthy and public spirited, and when I induced the Carnegie Foundation to donate $1,500 toward purchasing a pipe organ for our church, on condition that we raise $1,500 more to buy the organ, Mr. Brown immediately donated $500 toward the fund.

Then Will Eikenberry, who owned a big lumber yard north of the church, gave another $500 and raising the other $500 was easy. that's how the church got the first pipe organ in Chariton. I've wondered whether they still have the same organ (Editor's Note -- It is. Though it has been rebuilt on several occasions.)

Harry Stewart and his wife were also close friends of mine. His wife, who was Mona Clayton of Indianola before she was married, was a student at Simpson College when I went to school there for a year. She lived in the big house on East Auburn until she died a few years ago, just before I visited Chariton on a trip. I was sorry indeed to miss seeing her. I have been told that the big house is now a rest home.

HARRY AND I had two of the first autos in Chariton, both two cylinder Buicks, and both pretty punk. If you ask me auto makers had not quite developed good autos at that time. Harry's car and mine had the engine under the front seat, with the engine crank on the right side. The gas tank was under the hood. A chain drive from the engine to the rear axle was always breaking when I was on a drive, and I would have to hire a team of horses to haul my car home. If we drove out into the country we nearly always scared a farmer's team of horses, as they had never seen an auto before, and they would break the wagon tongue or try to run away. The farmers would then come in and stop their subscriptions to the Herald.

There was one earlier auto in Chariton, bought by Harry Penick in 1903 or 1904, I believe. Harry Stewart and I bought ours in 1905 or 1906. Harry Penick's car was always getting out of fix, too, when he was out on a trip. Harry had a brother named James Penick, who was a lawyer, and he had a son named Raymond, who used to play tennis with me, as that was my favorite game. I even had a dirt court in the back yard of our home in northeast Chariton. Raymond and I won the Southern Iowa doubles championship one year, in a big tournament, and I still have the old-style racket that I won as the prize. I always loved the game of tennis, and sept it up till only a few years ago. I also taught all three of our children to play, and they all became fine players.

I see in the special edition sent me that your still use the same title type that I selected for the Herald when I bought in in 1900, and also used for the Herald-Patriot when Paul and Chas. Junkin and I combined the two papers in 1909. My family and I made a couple of trips to California years before, and the California fever finally got the best of us in 1912 and I sold my share in the paper to Will Junkin and we came to California to stay.

WHEN I FIRST BOUGHT the Herald it was in a one-story building alongside the alley a half block north of the First National Bank. I published it there till we combined it with the Patriot, when we moved to the rear building of Hollinger & Larimer's across the street from the Bates Hotel. Will Junkin later built the building where you folks still publish the paper.

I noticed an interesting thing when I was in Chariton the last time, four or five years ago. On the north wall of my old Herald building, on North Main Street, I could still see part of the word "Herald," painted in big type near the top of the wall. A restaurant building alongside the old quarters hid most of the name. That sign was painted there soon after 1900, so it must have been good paint.

My closest friend among the businessmen was John Darrah, owner of the Fair Store on the north side of the square. He was a very successful businessman, and I foolishly induced him to run for the State Legislature, and he got so interested in politics that he neglected his business and finally had to discontinue his store. He is now living in retirement in Kansas City, quite lame from a paralytic stroke, I understand.

Southern Iowa counties n my early years in Chariton were decidedly stand-pat in politics, due largely to the powerful influence of the C.B.&Q. political bosses. John Darrah and I led a rebellion from that railroad dictation, and helped to elect Albert B. Cummins as governor, and to defeat Wm. P. Hepburn, our standpat congressman. From then on, Iowa rapidly became a Progressive state.

Your Centennial Edition mentioned many early citizens whom I have happy memories about, but I can't mention them all. I will however mention W.B. Dutcher and wife, who come to Inglewood occasionally to visit their daughter, Helen Major, and son who lives near here. Helen and I get together occasionally to talk about old  times and old friends in Chariton.

I'll close by mentioning an amusing little incident about Jim Penick, attorney friend of mine, whom I have mentioned above.

Jim had a keen sense to humor, and one evening when he was coming home from Indianola on the pokey little train that made the trip daily, the train made such slow time that Jim finally said to the conductor, who was an old time friend of his: "Is this all the faster our train can run? I could have walked faster than this."

"Why don't you get out and walk, then?" asked the conductor.

"I would," replied Jim, "only my folks won't be at the depot to meet me till time for the train to get in."

The Greenes settled at Inglewood, California, in 1912, where Sam edited and published The Inglewood Daily News for a number of years, but  branched out into other fields. Although he continued as a regular correspondent for The Los Angeles Times, he also was a founder and first president of the Bank of Inglewood, founder of the Inglewood Chair Factory and a founder of the Inglewood Rotary Club, Inglewood Chamber of Commerce and Inglewood Country Club. He also served as a California state assemblyman 1931-35 and as deputy state insurance commissioner for six years.

Approaching his 90th birthday on May 8, 1963, Sam died with his boots on --- dropping dead at a major intersection of the town he had done a considerable amount to promote while walking to an Inglewood Chamber of Commerce meeting.