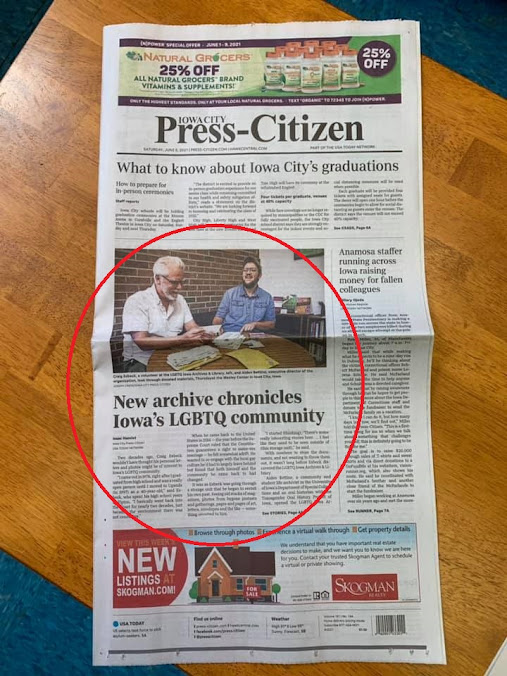 I've borrowed an image this morning from the Facebook page of the new LGBTQ Iowa Archives and Library, which opened during January on the lower level of the Wesley Center, 120 N. Dubuque St., in Iowa City, showing a front-page story in Saturday's Press-Citizen about the organization and its headquarters.

The Des Moines Register (also owned by Gannett) republished the story, which may be accessed here. And finally, here's the Web address for the organization and its library-archive. Pictured are volunteer Craig Esbeck (left) and Aiden Bettine, executive director.

Iowa's is certainly not the first archive of this sort, but such things are rare in the heartland, so it seems to me another cause to celebrate during June, Pride Month, and thereafter.

It's also a bright spot in a year dominated so far by mostly unsuccessful efforts in the Republican-controlled Legislature to limit or restrict the rights of trans and gay Iowans, among others. Those efforts most likely will continue.

It's relatively easy to launch a project of this sort, considerably more complex to sustain it --- so I hope that all goes well.

I wish I lived a little closer, in part because I've got a lot of books that would be a good fit for the lending library and I'd be happy to pass them along.

Also found myself kind of wishing this morning that I'd been an archivist myself, and maintained a file of  the homophobic rants that had been published in the Chariton newspapers over the years, most in columns written by the recently retired long-time publisher (not a resident of Lucas County, by the way), others in the form of letters from his amen corner.

It seems unlikely that these diatribes changed hearts and minds, but I've often wondered if they were internalized by gay kids who grew up reading them over the years. I doubt we'll ever know --- and the local newspapers were in far more balanced and thoughtful hands when I was growing up so I wasn't subjected to any of this --- but it would be a useful record to have, stored away for future reference.