Chariton's Levee as the root of all evil 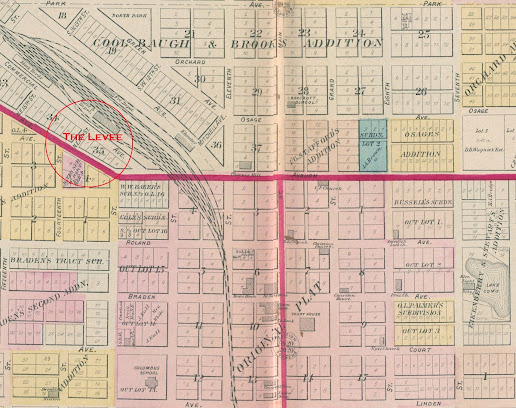 I wrote yesterday about the shooting death in Chariton during June, 1902, of Belden Cook by Charles Zimmerman --- as reported in Sam M. Greene's The Chariton Herald of June 19. If you missed it, kindly see "Murder on the Levee & a bump in the road to justice."

Editor Greene was a relative newcomer to Lucas County at the time. He had arrived from Clarinda in 1900 after purchasing The Herald and would remain for 10 more years, until 1912, before departing with his family for California and a long and successful career in journalism, banking, real estate and other interests.

It would appear that the commercial district known as "the Levee" that had developed southwest of the C.B.&Q. Depot in northwest Chariton between 1870 and Greene's arrival had been a considerable shock to his system. This was an area of saloons, cafes, boarding houses and small hotels and other modest commercial enterprises that served travelers, railroad workers at a time when Chariton was a major rail hub and nearby residents. It also had a reputation for being rough, tough, well-lubricated with liquor legal and otherwise --- and occasionally deadly.

After reporting the details of the Cook shooting on Page 1 of the June 19 Herald, Sam took to his editorial page to lambaste the Levee as a major source of evil in Chariton and the population of Chariton in general for allowing it to exist under the headline, "Why Does the Levee Exist?" Here's the text of the editorial:

The Levee in Chariton is a murder hole and the breeder of all kinds of vice and crime. Spasmodic attempts have been made to close it up, or retard its wickedness, but nothing permanent has been effected, and the place has gone back to its practices with renewed vigor after each effort at reform. There is no need for the Levee. Men do not need to be beasts and murderers, and women do not need to be fast. Any city that allows such a neighborhood to exist is encouraging vice and fostering a home for it.

The people of Chariton are responsible for the murder of Belden Cook last Saturday night, and for other murders and shooting affrays and hold-ups and drunken rows and debauches that have been going on for years. Why is the Levee allowed to exist? Is it the police officers' fault? Is in the fault of the justices of the peace? Is it the fault of the county attorney? All of these men are elected and sworn under solemn oath to do their duty, but when it comes to cleaning up the Levee they all stand back and blame it on someone else.

Some people hint that there is a "consideration" for somebody to allow the Levee to continue. Some say the officers are afraid they will lose the votes the Levee controls. And some say that public sentiment in Chariton does not demand that the Levee and like resorts be closed. We prefer to think that the last named is one of the principal reasons.

A community can elect its own officers and make its own ordinances, and if the moral sentiment is for enforcement of laws, the laws will be enforced. In Chariton the moral sentiment is not for enforcement of laws, and as a result there is murder and drunkenness and rioting rampant. If the people want it stopped they can have it stopped, but they don't want it stopped. The merchants are afraid of their trade, the officers are afraid of their votes, the women can't do anything but talk, and the newspapers and preachers are expected to keep the morals of the community rushing all right. And even then some of the newspapers will not take sides against crime, and some of the preachers are afraid to tell the truth. And those who do tell the truth are abused by the immoral element and by some of their own members for "meddling in politics."

Isn't it a beautiful situation, when you come to think of it? And the most beautiful thought in it is that the people of Chariton will only exclaim in horror at the open-handed crime that has come to public view for a moment, and will then settle back to their routine lives, letting the morals of the community go as they have been, electing the same old officers and then refusing to demand that those officers do their duty or help them to do their duty, letting selfish business interests crowd out everything else but a little selfish pleasure occasionally, letting the boys and girls get started to hell and then wondering why they go there, and then, when something awful happens, exclaiming again at the horror and again settling back in the old routine life.

No one else is to blame for the present moral conditions in Chariton but the people of Chariton themselves, for a community is just what its citizens want it to be, industrially, socially and morally.

If Sam had expected his editorial outrage to effect change --- well, that didn't happen. The goings on on the Levee continued to cause consternation for decades after 1902 until the district gradually mellowed  and eventually disappeared.

But it does appear that to a degree Greene's analysis was correct: Chariton residents in general were content at the time in their perception that all the wickedness had been corralled in a relatively small neighborhood --- and it wasn't their neighborhood.