As Memorial Day approaches, I thought it would be interesting to figure out who was the first to be buried in the Russell Cemetery, just in case folks wanted to pay their respects while decorating and/or visiting graves in the next couple of weeks.

I've written before about the cemetery's history, "How the Russell Cemetery got its start," and about the most likely contender for the dubious distinction of being first, "Russell's Samuel Hawkins: Mark every grave." Follow either link for more information.

But at the time, I had not found the following two paragraphs about cemetery history written by Susan Day in 1914 to be read as part of a longer paper at that year's fall festival, then republished in The Union-Tribune in 1932 as part of the town's 65th anniversary celebration.

"April 2, 1879, a cemetery association met in the Presbyterian church for the purpose of obtaining land for a cemetery. The ten acres in the northeast corner of the southeast one-fourth of the northwest one-fourth of section five was chosen and condemned by the township trustees and the owner was paid $300, and the costs were $15, making the cost of the land to the cemetery association $315. The cemetery was immediately surveyed and platted in 1686 lots by J.B. Fitch. The first person buried in the cemetery was Samuel Hawkins, in 1879. A little child of M.M. Prather had been buried at the east edge of the cemetery and was taken up and placed in a lot after it was platted.

"The directors of the Russell Cemetery Association for the first year were: J.S. Johnston, John M. Hanlin, James H. Cook, George C. Boggs and Alfred Goodwin. The Association had charge of the cemetery until 1912 when it was turned over to the control of the township trustees."

There are a couple of inaccuracies here, however. The Washington Township trustees --- Barney O'Hair, G.C. Boggs and J.S. Johnston --- had filed suit during January 1879 to condemn the cemetery site and default judgment was granted to them during February. So the property already was in hand and most likely already had been platted by April 2.

The Cemetery Association was formed, most likely, to reimburse township trustees for the cost of the property and to provide a permanent organization to develop, operate and maintain it.

Samuel Hawkins --- an uncle to Russell's substantial Hawkins family --- died March 3, 1879, at the age of 35 and thus was the first burial. His wife, Peninah, had died Jan. 22, 1876, but her death occurred in Fremont County and her remains were brought from there to the Russell Cemetery, as directed by Samuel's will, after his death. 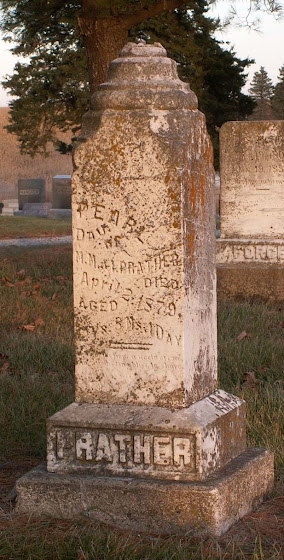 Samuel Hawkins appears to be assured of his first-burial distinction.