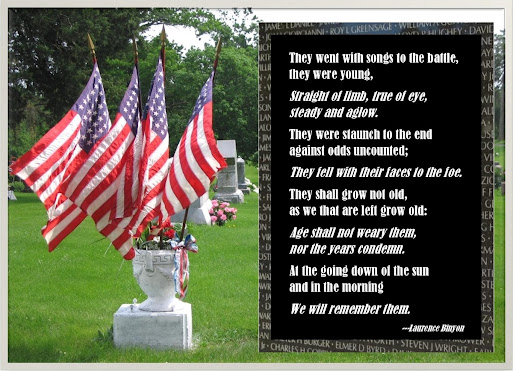 These are the third and fourth stanzas of a poem composed in September of 1914 by Robert Laurence Binyon (1869-1943), English poet and scholar, just after the outbreak of the First World War. The British Expeditionary Force had suffered fatalities in its first encounter with the Imperial German Army at the Battle of Mons in August and many more in subsequent engagements, including the First Battle of the Marne, Sept. 5-9.

Too old to enlist in the military, Binyon later volunteered for the Red Cross instead, serving as a medical orderly during the war, caring for the wounded.

Binyon said years later that the four lines of the fourth stanza came to him first --- and they remain the most familiar, universally appropriate for any day of remembrance.

In respectful remembrance of Richard and Robert, Bobby and Jim --- and many others ....