The "Religion of Our Presidents," 1875 version 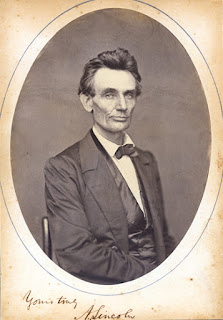 I came across the following, published under the headline "Religion of Our Presidents," in The Chariton Leader of May 1, 1875. It was not locally generated copy, but a piece that editor Dan Baker had picked up from an exchange and republished, attributing it to "Examiner and Chronicler," probably "Examiner and Chronicle," and at least two newspapers by that name were being published on opposite coasts at the time.

It offers some insight into the conventional wisdom of the day regarding the religious convictions (or lack thereof) of U.S. presidents --- concluding with Ulysses S. Grant, incumbent at the time.

I liked best the description of Lincoln, a 19th century gentleman housed in a 21st century frame, writhing during a long sermon in an uncomfortable pew. Although he attended regularly, Lincoln never joined a church. The family, in Washington, D.C., most frequently attended New York Avenue Presbyterian and considered its pastor their friend. But Lincoln also, if reports are believed, dropped in frequently during the war years for Evening Prayer at St. John's Episcopal in Lafayette Square.

The public religion of our leaders continues to be a political issue so I found interesting the view from almost 150 years ago:

The question has been raised whether any one of our Presidents was a communicant in a Christian church.

There is a tradition that Washington asked permission of a Presbyterian minister in New Jersey to unite in communion. But it is only a tradition. Washington was a vestryman in the Episcopal church. But that office required no more  piety that it would to be mate of a ship. There is no account of his communing in Boston, or New York, or Philadelphia or elsewhere during the revolutionary struggle.

Adams was a member of the parish in Braintree. He was High Arian (a reference to what more orthodox Christians call the Arian heresy). His attendance at worship was not very constant.

Jefferson was an avowed skeptic, and a devout admirer of Dr. Priestly.

Madison and Monroe were moderate churchmen.

John Quincy Adams was a professed Unitarian. He attended the services in the Representatives' Hall during the sessions of Congress. In the afternoon, he  worshipped in the Second Congregational Church, where he had a pew. When Congress was not in session, Mr. Adams usually attended in the morning the Unitarian church.

Jackson was a reverential hearer. He attended church a half-a-day. His pew in the Four-and-a-Half Street Church was on the left hand side of the preacher. He paid close attention to the sermon, and made a profound bow to the pulpit has he retired. He joined the Presbyterian Church after he left office.

Van Buren trained in the Dutch Reformed School and attended the Episcopal Church when he attended any. His Sunday afternoons were devoted to his political friends.

Tyler was loose in regard to Sunday and worship.

Polk, though not a professed Christian, was a regular attendant at public worship. He rode to church on Sunday morning and occupied the pew next to the one Jackson had sat in. Colonel Benton occupied the Jackson pew, and would not give it up. In the afternoon, Mr. and Mrs. Polk walked to the Second Presbyterian church, which was nearer the White House.

Fillmore, more than any other of the presidents, was an open and decided Unitarian. He gave his influence and support to that sect.

Pierce was always at church on Sunday mornings. He attended the Presbyterian church.

Buchanan was an Old School Presbyterian. The church was near his residence. The building was small and the congregation both small and poor. He was a very reverential worshipper. He walked to church; went up the aisle at a shuffling gait; dodged into his pew; and seated in the corner, seemed wrapped in his own thoughts, paying no attention apparently to the service. An observer could not tell whether he was asleep or awake. He hurried away as if afraid to be addressed.

Lincoln attended services once a day. He always seemed to be in agony while in church. His legs were long and the pews narrow, and he often relieved himself by putting his feet outside of the door, stretching them clear across the aisle. His pastor, Dr. Gurley, had the "gift of continuance," and the president writhed and squirmed, and gave unmistakable evidence of the torture he endured.

Gen. Grant is a trustee in the Methodist Church; but that  office does not imply a profession of personal consecration.