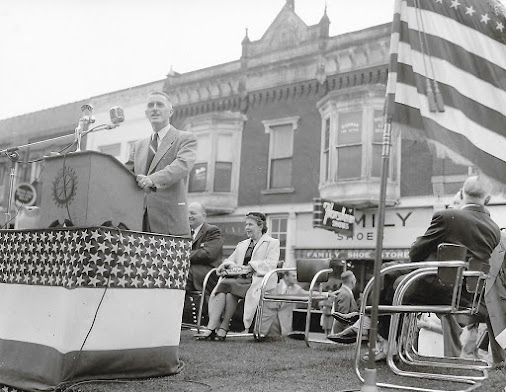 ... but the memories of relatively few go on forever, including those of the trio who campaigned in Chariton back on Sept. 9, 1954. The occasion was Indian Summer Day, a community celebration sponsored by the business and professional community that included the serving of thousands of pancakes, a parade --- and a few speeches.

It was a bi-partisan event featuring addresses by incumbent Iowa U.S. Sen Guy Gillette (1879-1973), a Democrat; and Republican Harold E. Stassen (1907-2001), Minnesota's 25th governor and the nation's most persistent but unsuccessful presidential candidate, who was campaigning for (among others) Leo A. Hoegh (1908-2000), Chariton attorney and incumbent Iowa attorney general who was seeking his first term as governor. 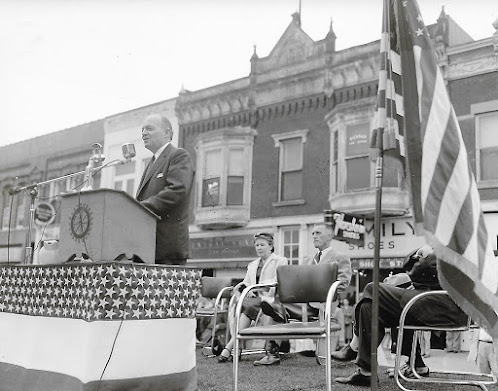 The speakers' stand was set up on the east side of the square in front of Family Shoe Store where, after the early afternoon parade, Hoegh (top) introduced Stassen, who then took the stand (immediately above). Herring, as the only incumbent, had spoken first. John Baldridge, Chariton Newspapers publisher and master of ceremonies, a Democrat himself, had introduced Hoegh with a tongue-in-cheek order that Democrats clear the area.

These two photographs, from the Lucas County Historical Society collection, were taken by the late Lloyd Moore.