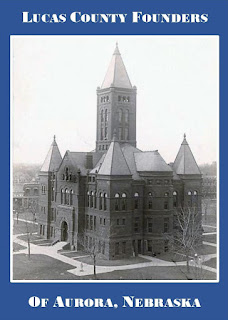 I wrote Sunday in a post entitled "And Chariton gave birth --- to Aurora, Nebraska,"  about the seven men from Lucas County who are considered to be the founders of that city of roughly 4,500 souls some 265 miles due west. And I promised to follow up by exploring the fates of the seven, two of whom ended their days in Iowa; the other five, farther west.
The men who formed a company while living in Chariton during March of 1871 to found the town in Nebraska were David Stone, a grocer on the square; Darius Wilcox, a dealer in grain, hides, farm produce and agricultural implements who had a grocery operation on the side; Robert Miller, a carpenter and builder; James A. Doremus, a grocery man, too; Justinian Ray, a druggist, Nathaniel H. Thorpe, a fledgling lawyer;  and Stillman P. Lewis. a tailor who also operated an ice cream saloon, confectionary and bakery on the square.
+++
Mr. Thorpe was the only one of the seven who eventually came full circle and returned to Chariton to die  some 57 years later, during 1928. His remains rest in an unmarked grave in the Chariton Cemetery near the graves of his parents, also unmarked --- Eleazer M. Thorpe (1819-1898), an attorney, and his wife, Elizabeth (Hopping) Thorpe (1819-1898).
Nathaniel was born April 14, 1848, in Piatt County, Illinois, and arrived in Chariton with his parents and siblings during 1857, when he was 9. Like his father, he studied law and had been admitted to the bar by the spring of 1871 when the Nebraska adventure commenced.
Nat and one of his partners in the enterprise, Robert Miller, reportedly were the first of the founders to settle permanently in Hamilton County, Nebraska. The Chariton Democrat of May 20, 1871, carried the following report under the headline "Our Colony in Nebraska."
"The reports from the parties who have taken a claim upon the site of the future county seat of Hamilton county, Nebraska, are quite favorable. Mr. Stone and others will start for the same place in a few days. Nat Thorpe is there still, and has had a law case. A man was arrested for stealing lumber and got Nat to defend him. Of course the fellow was acquitted and Nat got $25, besides the lumber alleged to have been feloniously taken and carried away --- all of which is encouraging to the others who contemplate settling there, provided Nat remains."
With one exception, the others did move west to Aurora --- but Nat didn't stick around long after building an office for himself, one of Aurora's first buildings. He was sighted next at Red Cloud, Nebraska, and soon after that bounced back to Chariton, to Corydon, to Leon, back to Chariton, to Lacona and then to Chariton again. He married Sally Nicol along the route and they became the parents of two children, Harry and Vashti, who were raised at Lacona.
Nat's marriage had failed by the turn of the 20th century and he headed west again after 1900, launching a variety of unsuccessful enterprises in Oklahoma, Texas and elsewhere before finally limping home to Lucas County in the 1920s in failing health and with few assets. He died in poverty at the Lucas County Home on Feb. 20, 1928, just shy of his 70th birthday.
Editor Henry Gittinger had the following to say about Nathaniel in his Chariton Leader edition of Feb. 28, where Mr. Thorpe's brief obituary also appeared:
"The death of Nathaniel Thorpe at the county home is noted in another column of this paper. He was the son of the Late E. M. Thorpe, pioneer lawyer of Chariton, and 'Nat,' as he was called, had also been admitted to the bar and hung out his shingle in various places. In fact, the secret of his lack of success was through his failure to remain in one place long enough to get a foothold. And this should be an example to young men, although Mr. Thorpe had a fine mentality and ample scholarship to succeed. But he was constantly dabbbling into this and that."
+++
Although Justinian Ray was one of the seven who signed the Hamilton county seat's founding document, it doesn't look like he ever made the journey west.
Born Dec. 17, 1826, in Fayette County, Indiana, Justinian generally was known as Capt. Ray, and was 45 --- considered rather advanced in years at the time --- when the Nebraska enterprise was launched.
He had married Mary A. McNeff in 1852 in Indiana and they had moved west to Sigourney in Keokuk County, Iowa, prior to her death five years later. He then married Lucy A. Howard. There were four children, Elizabeth, Mary, Martin and William.
Justinian enlisted during October of 1861 at Sigourney in Company D, 18th Iowa Volunteer Infantry, and was appointed 2nd lieutenant. Promoted to captain on March 1, 1863, he served honorably until his discharge during 1865. A year later, looking for a fresh start after the war, the Ray family moved from Sigourney to Chariton.
In Chariton, Justinian established a drug store on the town square, joined the Masons and the Odd Fellows and quickly became a member of the establishment.
During 1872, however, as his fellow signatories were getting settled in Nebraska, he moved his family from Chariton to Leon in Decatur County and established another drug store there. He lived in Leon for the remainder of his life, dying there on Feb. 20, 1895, at the age of 58. He is buried with his family in the Leon Cemetery.
+++
I'll have more to write another time about the five other founders of Aurora, Nebraska.
Posted by Frank D. Myers at 6:34 AM