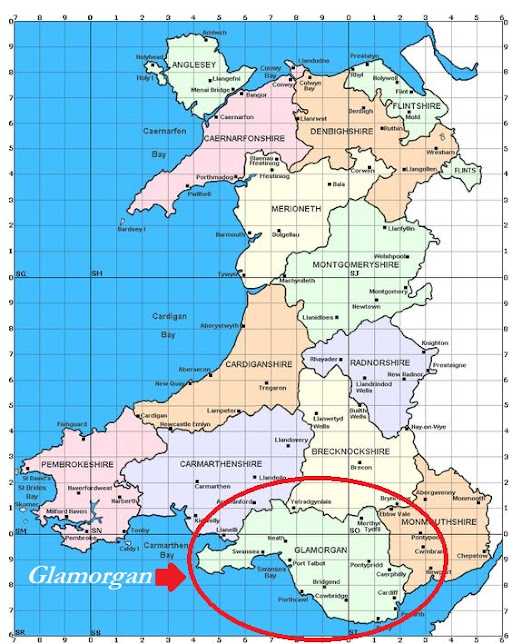 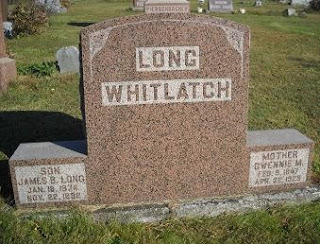 Since Monday was the feast day of St. David, patron of Wales, I decided to explore the stories of a few of Lucas County's Welsh pioneers, coming up with candidates by plugging "Glamorganshire" into my favorite Chariton newspaper database.

County Glamorgan, at the south end of Wales, was at the heart of the Welsh iron and coal industry and the source of many mining families who eventually came around the world to work in the mines of Lucas County.

One of the first people I came across was an old acquaintance, Gwennie (Jenkins) Long-Whitlatch (1847-1929), a stalwart daughter of Welsh pioneers who also was a neighbor of my mother's family in northeast Lucas County. Gwennie left behind a lineage of other stalwart Gwens, including a friend and high school classmate of mine.

Although Gwennie's father, David, devoted much of his life to farming, he got his start as an ironstone miner in Glamorganshire before launching his family on a round-the-world odyssey that eventually would end in Iowa --- David and his wife, Rachel, in Iowa County; Gwennie and her first husband, Fid Long, in Lucas County.

Gwennie's obituary, published in The Herald-Patriot of May 2, 1929, fills in many of the details:

Gwennie May Jenkins was born in Glamorganshire, Wales, on February 9, 1847, the second daughter of David and Rachel Jenkins. When she was four years old, her father heard the call of the newly discovered gold fields of Australia and with his wife and four babies sailed for the land of promise, just half way round the world. the little ship on which they made the 14,000 miles journey was twice given up for lost in the tropical storms and was eighteen weeks on the way.

Five eventful years were spent in Australia, most of the time the family living in the wilderness near what is now the city of Bendigo.

When Gwennie was nine years old the family returned to Wales, taking with them a quantity of gold, representing a comfortable fortune at that time. The return journey was made on the finest clipper ship then in the service, the trip being enlivened for the passengers by a fire that burned for three days in the cargo of wood in the vessel's hold.

They remained in Wales about two years and then came to America and  settled at Williamsburg, Iowa, where she grew to womanhood, secured a high school education at Marengo and engaged in the work of teaching school.

On March 18, 1869, she married Winfield S. Long at Victor, where they lived a short time and then followed the tide of empire westward, homesteading in Boone county, Nebraska, in 1871. After seven years of this pioneer life, the family moved to the farm in Pleasant township where fifty-one years later, on April 22nd, 1929, she passed peacefully away at the home of her daughter, Mrs. Charles F. Coffman, aged 82 years, 2 months and 13 days.

She was married to Walter Whitlatch, of Columbia, in 1898, and lived happily with him until his death in 1909. Since then she has made her home with her youngest daughter, Mrs. Coffman, on the old farm.

She was always active in community educational and religious work, and had been an active member of the Methodist Episcopal church for more than half a century. Her idea of Christianity was embodied in a creed of service to her fellow human beings and no appeal for sympathy or aid in sickness or misfortune ever went unheeded by her.

Mourned by all who enjoyed the privilege of her friendship, she has in the fulness of years passed on, but her good deeds will long keep her memory bright in the community which keenly feels her loss.

Services were held at Zion M.E. church on Thursday, April 25th, at 1:30 o'clock, conducted by Rev. L.B. Carpenter, of Villisca, Iowa, assisted by Rev. Meeker, of Williamson, Iowa. Singing was furnished by a  male quartet of Columbia. The pallbearers were D.J. Lewis and J.D. Lewis, of Williamsburg, Ancil, Carol and Clell Whitlatch, of Russell and Walter Maddy of Knoxville. Interment was in Zion cemetery nearby.

The obituary, as might be expected, does not specify how Gwennie's first marriage ended, but the scandal had so blackened the name in northeast Lucas County of Winfield Scott Long, known as "Fid" (1848-1909), that many years later, when I was a kid, my maternal grandfather and others still talked about it sometimes.

Everyone agreed that Fid was honest (in most areas of endeavor), congenial, competent, kind and good-looking, but he also turned out to be unfaithful. During 1886 or thereabout, age 38 and while serving as Lucas County's clerk of district court, he became involved with Miss Nellie Campbell, some 20 years his junior.

He left his family behind, although it's not clear whether he abandoned them or Gwennie kicked him out, and she took him to court during March of 1887. The Democrat of March 31, 1887, reported, "The case of Gwennie W. Long vs. W.S. Long for divorce and alimony has attracted considerable attention. The testimony was taken by a commissioner appointed therefor, and a decree was granted dissolving the marriage and awarding the care and custody of the eight minor children to plaintiff. The  alimony was settled by agreement between the parties, the plaintiff taking the home farm, stock, implements and $500 in money."

The Democrat's Pleasant Township correspondent, reporting news of the neighborhood in the edition of April 7, added this paragraph to his report: "We understand that Mrs. W.S. Long has got a divorce from her husband, W.S. Long, our clerk of courts. Fid, we gave you almost an unanimous vote last fall in this township and two years ago. Now, we want you to remember one thing, Fid, simply this: you will never go to Chariton to fill another office by a vote from Pleasant township. Mark it! You and the woman in the case may just as well skip this country as soon as you please, and the sooner the better for you, Fid."

Fid didn't skip the country, but instead continued to fulfill his duties as clerk of court and married Nellie on Dec. 15, 1887, although the marriage was not announced publicly.

The Chariton Herald of Feb. 16, 1888, reported that "Madam Rumor has been slyly whispering around for the past week or two that W.S. Long, Clerk of the Court, and Miss Nellie Campbell were married and keeping house in the southeast part of town."

Their son, Max, was born on Nov. 1, 1888, and the family moved to a small farm near Chariton where they lived for the remainder of his life.

Out in Pleasant Township, Gwennie raised their children and took over some of the community duties her ex-husband had fulfilled, including that of school board secretary. In 1898, she found a congenial companion in Walter Whitlatch, who lived nearer Columbia, and they were married (his first wife, Mary Ann, had died during 1890).

The three are buried in separate cemeteries: Gwennie at Zion; Walter beside his first wife in the Columbia Cemetery; and Fid, in Chariton. Nellie and their son eventually moved to California.

Thanks Frank. Good explanation of how our family ended up related to the Longs, Whitlatch and Coffman families. My great grandfather Smith married a Long and they moved to what is now the Pearson pumkin patch farm. Seems like we are related to most everyone from that part of the county.My grandfather was Dwight Long (Moody) Smith.