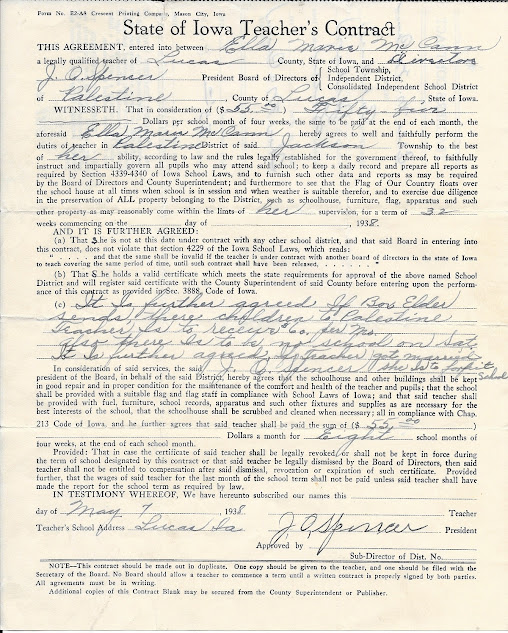 I mentioned yesterday that Jan Herald Conradt had donated to the Lucas County Historical Society several education-related items that had belonged to her mother, veteran educator Ella McCann Herald (1916-2005). Among them was a four-page manuscript containing memories of her career as a rural school teacher in Lucas County, which I've transcribed this morning as follows.

The illustration is one of Ella's teaching contracts, dated 1938 and containing a provision she referred to in the memoir --- "If the teacher marries during the term, she forfeits her position."

From country school I went to Lucas High School, where I graduated in 1933. I then attended Chariton Junior College the next term where I received a Normal Training Teacher's Certificate. At this time there were many applicants (both boys and girls) for each teaching position. It was practically unheard of for a married woman to get a job as a teacher. In fact, I have one contract that states, "If the teacher marries during the term, she forfeits her position."

In November of 1935, County Superintendent Helen Pfrimmer phoned my folks to ask if I would be interested in substituting at Centennial School in Pleasant Township. The teacher was ill and they needed someone until she could return. Her illness progressed and I completed the term. Some memories of that first term are:

A wonderful home away from home boarding with Clell and Ellen Whitlatch and family.

The deep, deep snow of the winter of 1935-36. WPA crews spent days and days scooping snow to open the roads during the extremely cold winter.

Frosting parts of my body as a friend and I walked across a drifted field making a super effort to get back to my school district one Sunday afternoon.

The challenge of carrying coal and building a fire each Monday morning. One morning as I was impatiently waiting for the fire to catch I opened the stove door and it "Caught!" A spark ignited my stockings and they burned in a second. It really startled me, but I had no body burns.

The special togetherness of the 12 to 15 families of the school community. We enjoyed potluck suppers and school programs by lamplight.

The janitorial work. Coal carried from the coal house, sweeping the floors which were often wide rough boards with cracks between, and seeing that there was water when more often than not there was no well on the school property and it had to be carried from a nearby farmhouse.

Hazel Dell, 1936-37: The winter was one of ice storms and slick roads. I remember Beverly Swainey Watsabaugh and I walking the mile to and from school. One long hill was so icy we sat down and worked our bodies down the hill. Families here were Swaineys, Dykes Stewarts, Gartins, Campbells and Starkeys --- a great group of parents. The Swaineys were another wonderful "home away from home."

Palestine, 1937-39: This was my home school and I boarded at home. I paid $4 per week which was the going rate at the time. Teachers' salaries ranged from $60 to $75 per month. This was a beautiful school building, almost new and so easy to keep clean, but still no electricity, no indoor plumbing and no water on the school ground. I walked the mile and a half to and from school. District families here were Veirtz, Culbertsons, Kents, Pims and Nelsons.

Pershing (Germany), 1951-52: Potluck dinners held once a month were memorable experiences. The food was superb, attendance was great and the fellowship was heartwarming. What a great way to keep the adults interested in school activities and the students interested in their elders and community. Families involved here were Wrights, Demings, Orwigs, Pattersons, Bartons, Barrows, Beatys, Blubaughs, Horners and Brees.

Dickerville (Cedar Grove), 1953-54: One fun time I recall was when my family and I, the students and parents were invited to the Bob Edwards home for a potluck and sledding party: Mary Ellen, Sheryl and Donna Edwards, Wisharts, Shores, Johnsons, Whites and Clanins. It was cold and there was lots of snow and it was a community fun time.

1. Wall lamps for extra light, outside toilets with coal or wood stoves for heat. This was very primitive, but we all made do with what we had and I don't remember any complaints. Buildings were nice and clean at the beginning of each term and we worked hard to keep them that way.

2. Mud roads --- Teachers usually found a home in the district where she could room and board, then walk to school. Very few teachers in the 1930s had their own cars. A few young men teaching in the rural system were the exception.

3. Janitor work --- Carrying coal was a heavy and dirty job. Teachers often had to supply their own kindling.

4. The togetherness of rural communities and rural families. At the time I was teaching (1935-1958) I remember very few children from broken homes.

5. I remember how dark the school rooms were on gloomy, cloudy days.

6. Each teacher was expected to teach her own music. The State Department of Education required so many minutes of music per week. Very few schools had a piano or organ. This presented a real challenge to those of us who weren't very musical.

7. Libraries in the rural schools were not very adequate. A large library at the County Superintendent's Office in Chariton was a central library. I tried to get a new supply of reading and resource material twice a month. Students eagerly looked forward to the new books.

8. One very challenging aspect of teaching a country school was getting your paycheck! Most townships in our county had nine school districts. Some townships had a complete board (three directors, a secretary and a treasurer) for each school; while others had directors for each school but only one secretary and one treasurer for the township. When payday arrived, a teacher must first get a warrant from the secretary, find the president for his signature, then the treasurer for the check. What a challenge trying to locate three busy farmers (all were farmers and seldom a woman on the board; all this without a car!).

I remember a very frightening experience in the spring of 1949 near Union School in Warren Township. The youngsters had been dismissed for the day and had just crossed the highway south of the school. The warm sunny days had triggered much melting of ice and snow. There was a nice crust of ice covering the water in a very deep grader ditch. This must have looked interesting to the little ones because I soon heard them screaming, "Johnny's fallen in!" We were all there in a hurry.

Little Johnny Ballard was in the water up to his arm pits, with his arms flat out on the ice. An area farmer was on the scene in an instant, reaching out a long pole. Johnny grabbed hold and was soon on firm ground. Other families at this school were Ashby, Tuttle, Shelton, Blizzard, Etter and Daniels.

A bad accident at Prairie Hill, 1942-43, involved Leona and Leo Pierschbacher, who were 7th graders and first-cousins. During the noon hour, with lots of snow just right for sledding, Leona and Leo started down from opposite hills and met head-on at the bottom. I don't remember Leo being hurt, but Leona was unconscious, then only semi-conscious for six to eight weeks.

Another accident at that school the same year involved Dwaine Kunch as he came running around the corner of the school building. He hit the flag pole with his forehead and I could not believe the size of the "goose egg" on that little guy's head. He was probably about eight years old and made a quick recovery.

I love reading these stories from years back! It's interesting to compare what was 'normal' for the time and how we educate now.