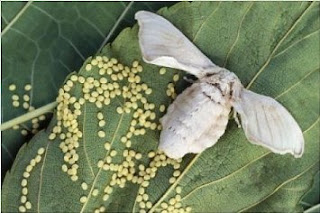 Chariton has been a railroad town since July of 1867, when the first engine and cars of the Burlington & Missouri River Railroad rolled into town on newly built tracks. More than 150 years later, we still sit at the intersection of the Burlington Northern & Santa Fe and the Union Pacific. During the intervening years, everything imaginable has rolled through town on freight cars, including I'm guessing a number of things we'd rather not imagine.

It was a series of freight cars, commencing in late December 1873, that landed Lucas County --- all of southern Iowa in fact --- on a 19th century version of the ancient Silk Road as the basic components of that luxury fabric were transported via North America from Yokohama, Japan, to France.

The silk industry had flourished in Italy, then France, since the late Middle Ages, after arriving from China via the Crusades. But a series of ecological disasters struck the European industry during the mid-19th century, killing off the varieties of domesticated silkworms that had formed the basis of the industry in the West.

Looking for a solution, researchers discovered that Japanese varieties were resistant to European diseases, and efforts --- centered on Yokohama --- began to import eggs, utilizing the newly built Suez Canal. But that route proved to be too warm --- and too many of the eggs hatched en route. So another solution was developed --- transport by sea to San Francisco, across the United States by rail, then from New York to Europe by sea again.

The trial run was made during December of 1873, and Lucas County's part in the experiment was reported in a brief paragraph published in The Chariton Patriot of Dec. 31:

A few days ago, a most valuably freighted car passed through Chariton, going east. It contained $2 million worth of silk worm eggs in charge of 10 men, among whom were several Japanese. The eggs were from Japan, en route for France. The same car conveyed them from San Francisco to New York.

A followup report in The Patriot of Jan. 7, 1874, described more of the process as follows:

It will be remembered that last week the Patriot mentioned the passage through Chariton on the Burlington & Missouri of a car load of silk worm eggs on their way from Japan to France. From the Chicago Tribune we learn further particulars of this valuable cargo.

It was the most valuable consignment that ever passed across the continent, begin worth something over two million dollars. The eggs were purchased in Yokohama by the French government and arrived in San Francisco Dec. 15. Only three days were lost in transferring them to the freight car, and on Dec. 18th the precious packages commenced their transcontinental journey.

The eggs are packed in leaves, layer upon layer, and placed in air tight tin boxes which are in turn covered with matting. The car is kept at a temperature below the freezing point, and no light is admitted. The matting covered boxes are piled on either side. There is nothing to be seen there but matting, and the appearance of the boxes is certainly not indicative of the value of their content. This is the first attempt to transport silk worms via the United States, and if human foresight awaits there is every reason to look for success.

The silk worm's egg is about one quarter the size of a pin's head and the reader may gain an idea of the number of eggs on their way to Paris when he learns that on this one car there are nine and a half tons of eggs.

The Burlington Hawk Eye of Jan. 8, 1874, reported the successful arrival of the silk worm eggs in New York.

The New York Daily Graphic of Dec. 31st contains a long account of the cargo ... sent by express from Japan to France by way of San Francisco, Burlington and New York. We make the following extract, as the subject is of public importance:

The steamship City of Chester, which left this port (New York) for Liverpool last Saturday, took out as her cargo a curious shipment of livestock, which, after nearly circumnavigating the the globe, is to go to the government of France. The lot consisted of some ... tons of silk-worms' eggs, gathered in the neighborhood of Yokohama, Japan, and shipped from that port, via America, for Paris.

It was less than eight days on the road between San Francisco and New York, having been attached during the whole trip to express passenger trains. Last Friday the cases were carefully removed on covered wagons from the New York Central Railway depot to the Inman steamship wharf and loaded on the City of Chester, under the superintendence of their four guardians, who will accompany them to Paris, and who appear, by the care that they constantly exhibit regarding the safety of their costly charge, to be anxious for the moment to arrive when they will obtain the receipt for its safe delivery to the government of France.

The precious cargo made its way safely to France and six weeks after the initial shipment, another express car loaded with silk worm eggs passed through Chariton, as The Patriot of Feb. 4 reported:

MORE SILK WORMS --- A Central Pacific Express car, containing nine tons of silk worms and eggs, passed through Chariton on Monday week. They were the property of the government of France, and were purchased by agents in Japan. They were shipped from Yokohama to San Francisco by steamer, at that point placed in charge of the American Express Company, and will be hurried through without change of cars to New York.

The experimental route appears to have been a success and sporadic reports continue for some time of shipments passing through Iowa en route to France, then Italy.

But the European silk industry did not revive --- as production ramped up in Asia it soon became evident that it was more practical to import fabric, a resource that could be moved from place to place with relatively little fuss, than it was to manufacture it.

But for a time at least, Lucas County sat astraddle the Silk Road.