At the North Africa American Cemetery .... 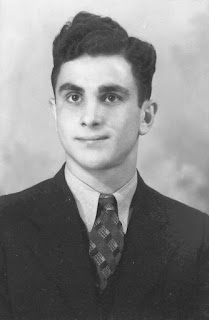 I came across this scrap of video in my social media feed this morning, posted to the American Battlefield Monuments Commission Facebook page by Dan Hicks after an early morning visit Thursday to the North Africa American Cemetery near the Gulf of Tunis at Carthage, Tunisia. Hicks is ABMC cemetery site manager.
It offered a brief reminder of green --- spring will come to Iowa, too --- and of the two young men from Lucas County who are commemorated on tablets of the missing here.
U.S. Army Air Forces Second Lieutenant Paul D. Pastovich (left), 24, of Pleasant Township, was a son of Dan and Anna (Braida) Pastovich, born 3 September 1919 in the mining town of Olmitz (now vanished), who graduated from Williamson High School and, in 1941, from Iowa State University with a bachelor of arts degree. He was inducted 24 June 1941; enlisted September 1941 in U.S. Army Air Corps; earned his wings and was commissioned 26 June 1943 at Randolph Field, Texas.
Assigned to the 787th Bomber Squadron, 466th Bomber Group (Heavy), Lt. Pastovich was piloting a B-24 bomber from Morrison Field, Florida, to Dakar, Senegal, on 14 February 1944 when the plane went down in the Atlantic about 90 miles off the African coast. Paul also is commemorated on a cenotaph near his parents' graves in Graceland Cemetery, Knoxville.
U.S. Navy Electrician’s Mate Third Class Arlie L. Hanks, age 41, of Russell, was a son of William and Laura A. Hanks, born 31 March 1901 at Russell, who was working as a telegraph operator for the Chicago Burlington & Quincy Railroad before he was inducted in Chicago on 1 January 1942.
EM 3C Hanks was serving aboard the USS Edward Rutledge (AP-52) which had successfully landed troops at Fedhala, French Morocco, on 8 November 1942 and lay off the beach unloading her cargo with two lifeboats, the only boats remaining after the assault. He was on duty in the engine room on 12 November 1942 when she was torpedoed by a German submarine that had slipped past the escort screen to sink the Rutledge and two other transports. The Edward Rutledge’s crew attempted to beach her, but power had been lost and she sank with the loss of 15 men, including Hanks. Arlie also is commemorated on a cenotaph in the Russell Cemetery.
Posted by Frank D. Myers at 6:56 AM