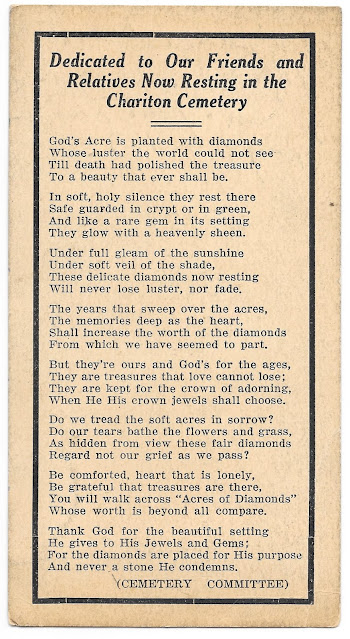 Back in the late 1920s and early 1930s, if a loved one was to be buried in the Chariton Cemetery, you'd most likely interact with Oren E. Lamb, named superintendent in 1924 when the city purchased the burying ground from Stanton heirs.

Mr. Lamb continued in that position until 1933, when he died himself --- of cancer --- at the age of 65. During his nearly 10 years of service he worked with landscape architect Ray F. Wyrick to refine, expand, repair and bring coherence to the place, creating much of the pleasant park-like setting we still enjoy.

He also became a trusted resource for families dealing with grief and this small card, from the Lucas County Historical Society collection, was something he distributed. A note on the back reads, "Mildred's card of Grandma Johnson given by Mr. Lamb May 5th, 1932."

The poem, unlikely to be critically acclaimed but no doubt appreciated by family members, is unattributed. It also was published in the Chariton newspapers under sponsorship of the cemetery board just before Memorial Day 1928, also without attribution. Was Mr. Lamb an aspiring poet, too? Most likely we may never know.

"Grandma Johnson" was Laura Emma Rogers (Mrs. Lewis H.) Johnson, who died May 3, 1932, at the age of 76. Mildred was her granddaughter, Mildred (Shore) Smith. Her family held on to the little card until it was passed on to the historical society by Christine and Kenton Coons three years ago.