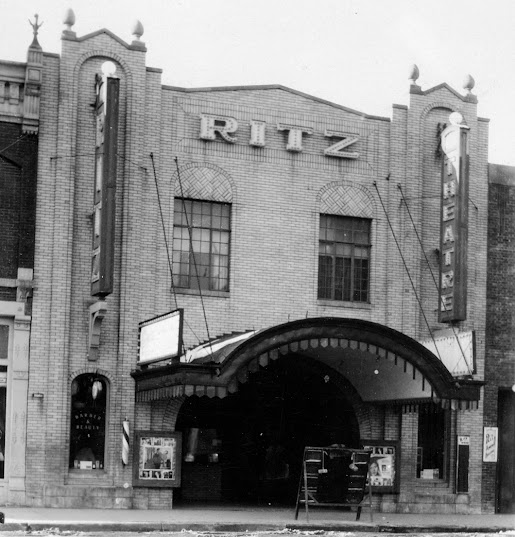 The Ritz Theatre (now home to the Connecticut Yankee Peddaler bicycle emporium) had just risen from the ashes of a huge 1930 blaze that destroyed all but its striking facade when, during January of 1931, there was another threat --- misbehaving and noisy adolescent males.

As a result, manager Harry Weber had two of the miscreants hauled before the mayor for a good talking-to and caused the following warning to be published in The Chariton Leader of Jan. 17 under under the headline, "Behave or get out is warning."

Two local lads were taken before Mayor A.C. Reibel Saturday afternoon, after they had "sneaked in" the stage entrance at the Ritz theatre to enjoy the matinee as "unwelcome guests" of Manager Weber. The Ritz manager took the boys before the city authorities, where they were given a forceful lecture by the mayor, and released with the promise that a repetition of their misconduct would result more seriously.

Mr. Weber states that drastic action is to be taken to preserve order in the theatre, and that admission will be denied a number of youngsters who have created disturbances there at various times. "Numerous complaints have been received," Mr. Weber states, " from patrons who have been unable to enjoy the high class talking pictures that we are bringing to Chariton because of the noise created by these miscreants. Such conduct on the part of small boys, and high school boys as well, must and will stop. It will be tolerated no longer."

In urging the cooperation of parents in his effort to put a stop to the disagreeable tactics of the boys, Mr. Weber states that city police will be called and legal action taken against offenders in the future. In addition those who create disturbance by loud talking and in other ways will be denied future admission to the theatre.

"Our patrons come to the theatre to enjoy the pictures and we will tolerate no disturbance that mars the enjoyment of these patrons. It has got to stop right now," Mr. Weber states.

The new feature instituted during the intermission between the two evening shows last Friday met with popular approval. The Memphis Seven, with Mr. Weber's eccentric conducting, in their novelty musical numbers drew a big hand, and the entertainers were forced to answer repeated encores. This feature will be a part of the regular Friday evening program during the coming weeks."

Manager Weber's strong offense seems to have been effective as there were no further reports of unrest at the Ritz, where the featured talkie that late January week had been John Barrymore and Joan Bennett in "Moby Dick."

And The Memphis Seven, described as a local dance band directed by Mr. Weber, continued to entertain from the Ritz stage during intermission, joined now and then by another popular local vaudeville act, The Willoughby Sisters.