"Hellholes that are rapidly degrading our youth" 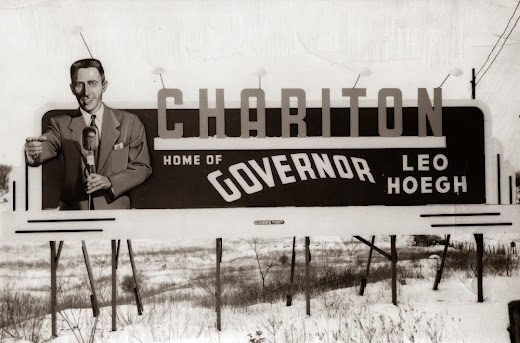 Chariton attorney Leo A. Hoegh (elected Iowa governor during 1954) was serving his third term in the Iowa House during early 1941 when beer emerged as one of the most contentious issue of the legislative session. Residents of rural and smaller-town Iowa recognized the evils of the beverage; residents of larger cities, not so much.

When the House version of the regulatory bill was introduced during late January, one of its co-sponsors --- from Spirit Lake --- noted the importance of regulating "the hellholes that are rapidly degrading our youth."

It was Hoegh's practice to provide the Chariton newspapers with regular reports during the legislative session. His report published in The Herald-Patriot of Feb. 6, 1941, listed the beer bill among several that had been introduced recently in the Legislature, reflecting concerns of the day:

H.F. 96 --- A bill providing for certain regulations for the sale of beer, including: (a) No dancing; (b) No place where beer is sold shall contain booths; (c) No food may be sold in such a place; (d) No beer can be sold in pool halls or bowling alleys. The bill has been referred to a committee, but no action has been taken upon the same.

H.F. 114 --- A bill shortening the time for taking an appeal from the District Court to the Supreme Court.

H.F. 123 --- A bill making the Iowa standard for lard and rendered pork fat the same as the Federal standard.

H.F. 142 --- A bill which permits an officer to arrest a person if he has reasonable grounds to believe a public offense has been committed without being subjected to an action for damages for false arrest.

H.F. 148 --- A bill permitting a public school district to establish a nursery school for residents of the district of pre-school age.

H.F. 160 --- A bill relating to the practice of cosmetology and the qualifications of Cosmetology Schools.

H.F. 165 --- A bill providing for the establishment and maintenance of one or more branches of the Iowa State Traveling Library, and the extension of library facilities to the rural areas of the state. This measure has been referred to the Public Library Committee but no action has as yet been taken by this committee.

S.F. 185 --- A bill to permit fence viewers to employ the service of a registered land surveyor.

There were a variety of other provisions in the legislation, both House and Senate versions, including one that would have required saloons to have large windows and bright lighting so that passers-by could easily discern who was inside. Hoegh, in general, supported the restrictive legislation.

In the end, as the result of a hastily crafted compromise that ended up causing considerable confusion in the agencies charged with enforcing it, many of the harshest measures fell by the wayside. Taverns were allowed to offer dancing, for example --- providing they provided a dance floor of at least 500 square feet and agreed to hire a uniformed police officer to ensure that there was no hanky-panky thereon. And booths were permitted --- but could be no higher than 40 inches.

During December of 1941, of course, the Japanese attacked Pearl Harbor and the United States declared war upon both Germany and Japan. After that, for a time at least, other issues seemed more important than beer and Iowans would await peacetime before obsessing about their liquor laws again.

Mr. Hoegh (1908-2000) resigned from the Legislature when his National Guard unit was mobilized and served meritoriously during the war, then returned to Chariton and, in 1954, was elected governor on the Republican ticket.

He proved to be too progressive for Iowa voters, however, and was not accorded a second term.

After a couple of federal appointments, he eventually returned to private life and moved to Colorado, where the remainder of his life was spent.

I remember that billboard outside Chariton.