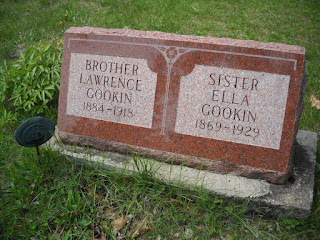 The dawn of a new year --- 1921 --- in Lucas County brought with it a reminder of the Great War that had ended little more than two years earlier. Twenty-six young men who were native to or residents of the county had died, eight in combat or combat-related wounds in Europe, the remainder of complications of what was known as the Spanish flu.
The first to die overseas was Lawrence Gookin, claimed by pneumonia in France on Feb. 21, 1918. His remains arrived at the C.B.&Q. Depot in Chariton on Friday, Dec. 31, 1920,  and funeral services were held at First Christian Church on Sunday afternoon, Jan. 2, 1921. Here's a report from The Herald-Patriot of Jan. 6. (Find A Grave photo.)
+++
The remains of Lawrence Gookin, who was the first young man from Lucas county to die in France during the recent war, reached Chariton last Friday evening. The body was met at the depot by a delegation of relatives and members of the American Legion and escorted to the Rogers hall.
On Sunday afternoon at 1:30, largely attended funeral services, under the auspices of The American Legion, were held at the Christian church. Rev. A. E. McKim delivered a splendid eulogy and a quartette, composed of Messrs. Curtis, Mikesell, Dillman and Trautwein, sang a few appropriate selections.
At the conclusion of the service interment took place in the Chariton cemetery, members of The American Legion conducting the last rites at the grave after military fashion. A firing squad fired a volley over the grave, Taps was sounded and the body of the brave young soldier was lowered to its last resting place.
Lawrence Gookin, son of Mr. and Mrs. Samuel Gookin, now deceased, was born in Benton township on May 4, 1884, and died in a hospital at Nevers (Nievre), France, on Feb. 21, 1918, after a brief illness with pneumonia at the age of 34 years, 9 months and 17 days. He enlisted in the service of his country at San Francisco, California, on Feb. 12, 1917, under Capt. J.B. Ettudge, being a member of the Wagon Train, First Division, with the rank of Private, First Class.
Deceased lived in this county until about 12 years ago, when he went to Nebraska, then to California, where he was employed in the shipyards at San Francisco at the time of his enlistment. He was among the first to sail for France, and was the first Lucas county man to die overseas. He was a most worthy young man, of genial manners, upright in character, and had a host of friends in this county.
He is survived by two brothers and six sisters, Andrew D., of Warren township; John, Mrs. Chas.White, Mrs. J.D. Threlkeld and Miss Ella Gookin, of this city; Mrs. L.L. Kellar of Benton township; Mrs. J.P. Holmes, of Riverside, Calif.; and Mrs. G.C. Holmes of Dunbar, Nebr. One brother, Craig, preceded him to the Great Beyond on Jan. 7, 1901.
+++
The remains of Lucas Countyans who had died overseas during the war began to come home during October of 1920 when Pvt. William Pulley was buried in the Derby Cememtery; the last to arrive were those of Pvt. Roy Tickel, buried in the Newbern Cemetery during December of 1921.
The families of two soldiers, Fred Culbertson and Oshea Strain, decided to have their remains interred in new American cemeteries in France, where they remain.
Posted by Frank D. Myers at 7:23 AM