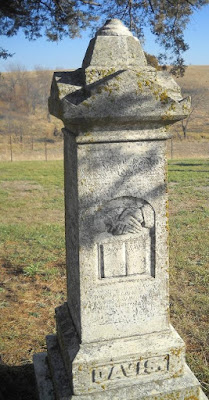 I stumbled across this little celebration of pioneer patriarchy in The Centerville Citizen of Dec. 22, 1886, while looking for something else the other day. The family is that of Susan Marksberry Davis (1820-1890) and her husband, Robert L. Davis (1811-1888), buried in the Confidence Cemetery, who made a sincere effort to populate the south of Iowa by producing 14 children, 11 of whom lived to become adults, eight among the survivors who were sons, three of whom were daughters.

The daughters get short shrift here, so I'm going to name them first: Nancy Davis Barker (1842-1919), buried at Promise City; Sarah Davis Mackey (1854-1946), buried at Russell; and Jerretta Davis Frye (1864-1889), buried at Confidence. I've altered the transcript a little by substituting full names of the sons for the initials used in the original.

Here's the report. I can't say if these paragons of pioneer patriarchal pulchritude remained teetotalers until death and continued to live exemplary lives, but considering sheer volume there probably are descendants out there who could fill us in. (Thanks to Find a Grave for the image of the Davis tombstone in the Confidence Cemetery.)

A little circumstance happened here last week which deserves particular mention and we doubt if such a thing has happened elsewhere in the state for years. There called at this office last Thursday seven brothers, formerly old residents of this county, and all but one now residents of this and Wayne counties. the total weight of these seven brothers is 1,220 and 1/2 pounds, or an average of 174 and a fraction pounds, and their united ages 296 years.

The parents of these men came to this county in 1852, and are still living and keeping house together in Wayne county. There were fourteen children in the family, nine boys and five girls. Eight of the sons are yet living and three of the daughters. Six of the sons are farmers, one a gold miner living in Oregon, and one a blacksmith. five of them live in Wayne county, one in Appanoose county, one in Kansas and one in Oregon; all eight have a common school education and they say can all play on the violin. Seven of these men take the Citizen, the oldest and best county paper in southern Iowa.

There is not one of this family given to the use of intoxicating liquors. They are all stout, able bodied men, and a credit to any community. It is very seldom we see a family composed of so large and able physical manhood as these men are. This is the kind of men who have made Iowa the name she has at home and abroad --- that has made the prairies to blossom as the rose, that has subdued the soil and made Appanoose county second to none in the state. The parent are Kentuckians by birth, of the good, strong, daring people that have made their mark in the world.

Frank,
Nancy was our grandpa Barker's grandmother. As far as we know he respected the family tee-totaler tradition but he wasn't as prolific, with only one child, our mother Pauline Barker Vincent.