In my merry Ransom E. Olds-mobile ... 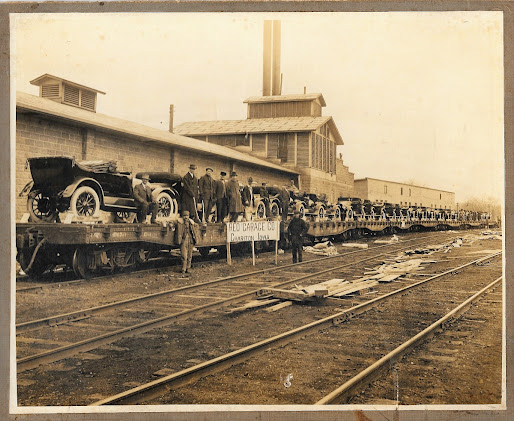 I wish that I knew this photograph's full backstory --- but don't. We have two copies in the Lucas County Historical Society collection, one in slightly better condition than the other, but neither arrived with its history intact.

The image shows about 20 new automobiles recently unpacked but still aboard flatcars parked alongside the Chariton Ice Company's plant about 1915 (the ice plant was built during the summer of 1913 adjacent to the C.B.&Q. Freight Yard, northwest of the current Freight House events center, fronting on Brookdale Avenue).

By that year, the Chariton REO Garage Co. was Lucas County's largest automobile dealer. Some idea of its scale can be gotten from this brief article, published in The Chariton Leader of May 20, 1915: "This is a fast age and the automobile has come to stay. On Saturday, May 8, the Reo Garage Co. of this city sold six cars --- 3 Reos, 1 Buick and two Fords. But on Saturday, May 15, this record was beaten and 12 cars were sold and  5 more ordered, which could not be supplied from the stock on hand, which was 17 for the day. Those delivered consisted of 1 Reo, 2 Buicks and 9 Fords. Besides these Saturday sales, the firm had averaged a sale of a car per day during that time, distributed through the week. This is going some."

The REO Garage Co. was founded in Chariton during 1909 by the Albia REO Garage Co., then sold during 1910 to the Miley Bros., Oscar W. and Pearl "Jack," Marion/Lucas county natives, but then of Maryville, Missouri. Originally located just south of the southeast corner of the square, the brothers during 1911 purchased the Chariton Auto Co. building on North Main Street and added Buicks and Fords to their offerings.

The REO line of vehicles had been launched in Lansing, Michigan, during 1907 by Ransom E. Olds, who had founded Oldsmobile during 1897, then left it to form a new enterprise, condensing his initials to form the name for a product line that included automobiles until 1936, when the emphasis switched to trucks. REO remained in business in one form or another until 1975. Volvo currently owns the REO trademark. 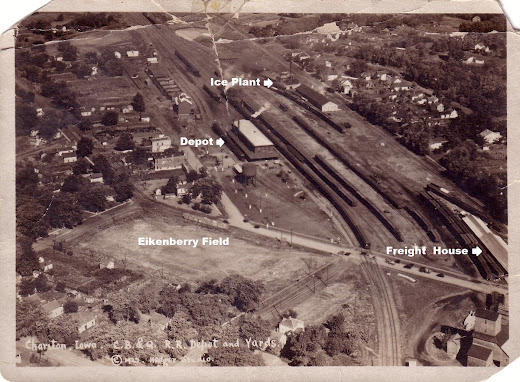