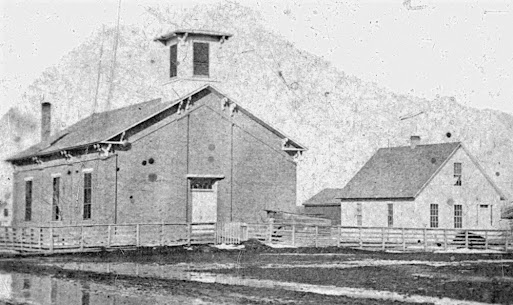 Christmas trees were few and far between in Chariton as the big day approached during December of 1878. This had nothing to do with a lack of holiday spirit; more to do with custom than anything else.

This was before the days of a Christmas tree (or two or three or more) in every home. Instead, the various churches in town took it upon themselves to set up trees in their sanctuaries and invite all comers to Christmas Eve gatherings that featured carols, candles (and buckets of water in case the tree was inadvertently set alight) and distribution of gifts, many brought from home and addressed to specific children, plus candy, peanuts and other treats for everyone.

Chariton's 1864 brick Methodist Episcopal church at the intersection of North Main and Roland was packed that long ago Tuesday evening, but a problem developed --- as reported in The Patriot of Jan. 1, 1879:

"The Christmas tree at the M. E. church drew an immense crowd, and the weight on the floor was so great that it gave way and sunk over a foot in the middle. Considerable commotion prevailed in a portion of the audience for a few minutes."

Although the floor was raised and reinforced, the near-calamity was taken --- along with others --- as a sign that the old building was in need of either a major upgrade --- or replacement.

Caution prevailed and by midyear 1879 the decision had been made to used the existing building as the base for a major remodel and the Des Moines-based firm of Blake & See was employed to draw up plans and specifications for a gothicized embellishment of the original complete with mighty bell tower.  Bids were opened on June 23. This is what the reincarnated structure looked like. 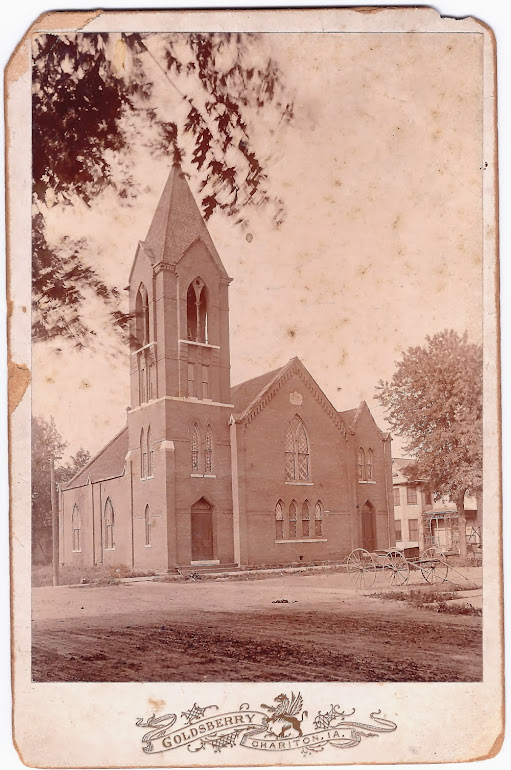 In the meantime, the congregation decamped for the assembly room (courtroom) of the 1858 Lucas County Courthouse where services were held for the balance of the year. The congregation's Christmas tree was located there on Christmas Eve 1879, but soon thereafter the refurbished building was ready.

The refurbished building did not work well, however. It was too small and structural quirks related to the 1864 original continued to plague the congregation.

As a result, this building was demolished during June of 1899, just 20 years later, and the current rather grand building dedicated on the same site during July of 1900.

As had been the case in 1878, the congregation removed temporarily to the courthouse --- the new one, built in 1893 --- for the duration. And that's where Christmas 1899 was observed.