Miss Florence Dale has her say about sexual abuse 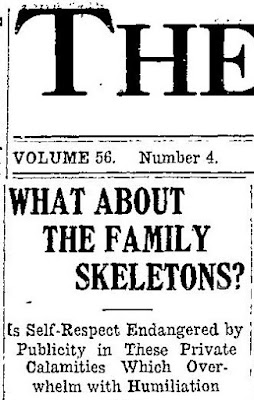 High profile cases of sexual assault have been much in the news lately, including the recent sentencing of USA Gymnastics team doctor Larry Nassar to a maximum 175-year prison term for abusing young athletes in his care.

But as often is the case with human nature, there's little new under the sun and the principal difference between "then" and "now" is our willingness to air troublesome issues and work publicly to resolve them.

Back in January of 1927, the attempted rape of a Lucas County youngster by her father made the news in Chariton and received a good deal of publicity in large part because Chariton Leader editor Henry Gittinger couldn't resist pontificating, suggesting editorially that bringing the case to court had caused unwarranted embarrassment to everyone involved.

This outlook so infuriated Miss Florence B. Dale (1887-1973), best known as an outstanding cook in several Chariton restaurants during her career, that she loaded her fountain pen and fired both barrels into the editorial chest of Mr. Gittinger, who published her response on the front page --- after devoting half a column to mansplaining why he thought she was wrong. None the less, she'd had her say.

I've "x'd" out the name of the perpetrator in what follows. This was a huge family and some of the children remained in Lucas County and still have descendants here. Visiting the sins of a father on his descendants seems to serve no real purpose.

The next week, on Jan. 18, Henry decided to editorialize briefly about the case in his Chariton Leader column, "The Mormon Trace," as follows:

"What awful things happen right in the home communities. Last week Judge E.S. Wells sentenced Xxx Xxxxxx to a term of twenty years in the penitentiary, on a charge preferred by a daughter, to which he pleaded guilty, being intoxicated at the time. I offer no criticism, but it is an awful thing for a child to put a parent in the penitentiary. Would it not have been as well for each to have gone their way as strangers, and the world would have never known? To secret humiliation has been added this outward and lasting disgrace. No --- not censure, but pity."

After reading that, Miss Dale saw red rather than black and white, then penned the following, published on the front page of The Leader of Jan. 25 under the headline, "What About the Family Skeletons?"

"Dear Sir: I see in your last week's column of Mormon Trace an article entitled, 'What Awful Things Happen.' Then you went on to say that Judge Wells had sentenced Xxx Xxxxxx to a term of twenty years in the penitentiary on a charge preferred by a daughter to which he pleaded guilty, being intoxicated at the time. You go on to say 'I offer no criticism, but it is an awful thing for a child to put a parent in the penitentiary.' You also ask the question, 'Would it not have been as well for each to have gone their way as strangers and the world would have never known?'

"My answer is that the very fact that a father has pleaded guilty to such a charge should remove every question of a doubt, as to whether the daughter did right in reporting the case, or whether she should have gone her way, as you say, as a stranger and left three younger sisters motherless, as in their case, in charge of such a father. Intoxication is no excuse. Why should a father, with a family of motherless girls, allow himself to become intoxicated to such a crazy state of mind, and what are the laws of this land for unless to protect the innocent and to punish the guilty? And to shield your friends and relatives and punish your enemies; guard your neighbor's sons and daughters?

"You ended by saying 'No, not censure, but pity!' Yes, I have pity, too, but I don't believe our pity is centered the same way. My pity is for the motherless children who have to go through this, especially for the older daughters, who have done so much to fill the place of mother to the younger children. Yes, Mr. Gittinger, I had pity in my heart when I saw the daughter who is in the 7th grade in school come home through the blinding snowstorm with the school books in a sack on her back and those of two younger sisters after the home had been broken and the father taken away, but my pity was for the motherless girls, not for the unnatural father. I believe in children respecting parents and doing all they can for them --- but I also believe in parents respecting themselves.

"If this man had not pleaded guilty there might have been room for people to sympathize and question themselves whether or not he should have been sent away on a charge preferred by a daughter, but as it is I feel that you and everyone else are doing the daughters an injustice to suggest that she should have gone away and lost herself to the world, leaving the younger sisters in care of such a father. You may tell the world how I feel about it also. This is one answer to your question and I hope you will not be backward in publishing it. (signed) Florence Dale"

The perpetrator here was taken from Chariton to Fort Madison immediately after his sentence was imposed during January of 1927. In 1930, assigned to a prison farm, he escaped and remained at large for several weeks until apprehended and returned to Fort Madison. He was released during late 1936, his term --- according to prison records --- having "expired" after 10 years. Death came in 1951 and he was buried beside his wife, whose 1919 death had left this large family motherless, in an adjoining county. 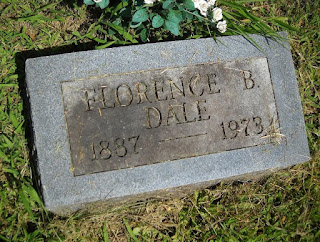 Florence Dale continued to live in Chariton until her death on April 5, 1973, after a week's illness. According to her obituary, "Miss Dale was well known for her culinary arts. She was employed at the Chariton Country Club and Fern's Tea Room. Later, Miss Dale worked at Lindquist Cafe for many years. In her retiring years, you could always find Miss Dale working in her garden and her prize strawberry beds."

She is buried in Grimes Cemetery, atop the White Breast hill not far west of Chariton.

Florence Dale was our neighbor, and she usually was dressed like a man, doing a man's labor, working on her homestead, which was a huge yard on Armory Ave. As a kid, I was a little afraid of her, but when we got a little older, we found out when her birthday was, and we actually had a birthday party for her, she got dressed up in a dress, and she looked great, we barely recognized her, she took care of her sister, Oney, we really had a great bond with her after that, thought of her as family. When she sold her property, my folks bought a lot of it. Loved her, she was a wonderful neighbor and friend. I hadn't heard her name in years, thanks for this, I didn't even know she was a cook. Carolyn Hoxton