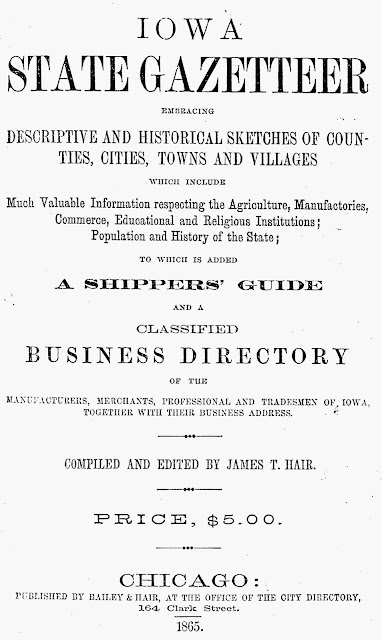 I've mentioned the 1865 Iowa State Gazetteer a couple of times in recent days. This little volume, published in Chicago by Bailey and Hair, contains what so far as I know is the earliest published account of Lucas County history, although it is brief. The same probably will be true for other Iowa counties and the good news is, the book available free to read (or download or add to your online "library") at Google "Book."

To compile this book as the Civil War was ending, the publishers engaged local "correspondents"  to compile the county histories, which means I'm guessing that their quality varies. But a young attorney named Theodore M. Stuart (1837-1922) did a good (and entertaining) job of profiling his adopted home. Stuart  went on to practice in Chariton until his death, edited a two-volume history of Lucas and Wayne counties in the "teens" of the 20th century and founded a lawyerly line that concluded with the late Bill Stuart, his great-grandson.

Here is T.M. Stuart's pioneering account of Lucas County history as it appears on pages 270 and 271 of the Gazetteer:

This county is situated in second tier of counties from the southern boundary line of the State; and about midway between the Mississippi and Missouri Rivers. The land is high and rolling, though generally not rough; being of the very best quality for farming purposes. It is well supplied with coal, and has timber sufficient for the improvement of the prairie lands. The county has at present a population of about six thousand three hundred and fifty.

The first settlement in the county was made in 1847 by a party of Mormons. They located on what is now known as Badgers farm, then called "Chariton point," about one and a half miles southeast of the present town of Chariton. They erected a few rude log huts and remained here about one year. In 1848, Buck Townsend, William McDermott, John Ballard, Thomas Wilson, James Barker, and one or two others settled in the county. Barker was the preacher for the new colony, and it is said that he got off some very good sermons, when he happened to be sober, which was seldom the case.

The settlement rapidly increased. In 1849, James T. Robinson and Wm. T. May, commissioners, located and laid off the town of Chariton. The first house built in the town was a split log house, built by Beaverly Searcy on the southwest corner of the square, where it still remains.

The early settlers engaged largely in land speculations. Each man had his pockets full of land claims which he proposed selling to the new comers.

It is said that as late as 1850, it was almost impossible for a new settler to find a tract of land in the county, suitable for farming purposes, which was not already claimed. He found every desirable tract blazed and staked off; and he also soon learned that if he remained in the county he must strictly observe a code of laws, enacted by a legislative body called "The Settlers Club" or "The Home Protection Society."

Numerous interesting legends are told of the hair-breadth escapes of speculators who attempted to enter lands claimed by settlers; and if all told is true, many a "land shark," after a hasty retreat, has returned thanks for a safe deliverance from the clutches of the "Home Protectors."

In 1853, the land office was established in Chariton; and then began a new era in the history of the country. A class of men called "Land Sharks" concentrated at Chariton to prey upon the emigrants that were now fast pouring into the country. They were always prepared, for a consideration of twenty-five or fifty dollars, to furnish the new-comer with numbers of the very best of land, and assist him in entering it. If he desired to see the land before he invested, it would only take them a few hours to drive him out and show him some beautiful tract of land, which was perhaps several miles from the land he was really buying. Of course he was well pleased, and perhaps did not find out the "trick" until he had paid taxes for several years on some inferior tract of land. There is a beautiful tract of land situated three miles west of Chariton called "Hickory point" which, it is said, was thus disposed of to at least fifty persons.

But this class, like the red man flying from civilization, vanished at the approach of the long emigrant trains of steady and industrious farmers from Ohio, Inidana and Illinois, who were seeking permanent homes in Iowa. They did not come here for the purpose of speculation, nor simply for the purpose of investing some surpus capital, but to settle and improve the county. During the years which intervened between 1850 and 1857, the appearance of the county underwent a material change. The broad prairies were specked with farms, the hum of mills was heard in the timber, school houses were erected, and in all parts of the county were seen evidences of industry and permanent improvement. Property rapidly increased in value, extensive dry good stores were established in Chariton, which soon became an active trading town The town and county continued to improve until the crisis of 1857 which checked improvement for a few years.

This county has furnished 650 volunteers for the Union army during the late rebellion.

CHARITON, the county seat, is a flourishing town of 1,300 inhabitants. It is situated near the centre of the county, about one-half mile from the Chariton River; and is a point in the chartered line of the Burlington & Missouri River Railroad.

The public buildings of Chariton consist of a large brick court house, erected in the public square, at a cost of about $20,000, and a substantial brick jail. It has one large brick church completed and two others in course of completion; and also two frame school houses. There are four teachers employed in the public schools, which are in a flourishing condition.

In 1850, several house were built in Chariton. Wescoatt built a store-house, and opened a store; Henry Allen built a hotel, and in this year the celebrated log court house was built on the east side of the public square. This house answered for church, school house, town hall, ball room and law offices for several years. Here the Rev. Barker expounded the Scriptures; and in the same spacious hall the youths of the new colony were amused and delighted by sleight-of-hand shows.

The members of Rev. Barker's church seem to have been very liberal and tolerant in their views; as it is said that the announcement of a dance at the close of religious services was not an unusual occurrence, nor was it considered anything out of place. Shooting matches were the most popular amusements, and were usually held on each Sabbath on the public square. Barker often preached in the country, and the announcement of his appointment was a signal for the gathering together of all persons who owned fast horses, and those who wish to witness a horse race, which generally took place immediately after services.

LaGRANGE, a small village of about of about 200 inhabitants, is situated in the eastern part of the county, and contains two general stores.

FREEDOM, another small village, is situated in the southern part of the county.

The Gazetteer also contains an extensive business directory, a little difficult to use because the list is statewide, arranged alphabetically within categories by hometown. I think I've managed to lift most of the Chariton references, as follows:

And finally, here's a list of subscribers. I these gentlemen ordered advance copies of the Gazetteer: