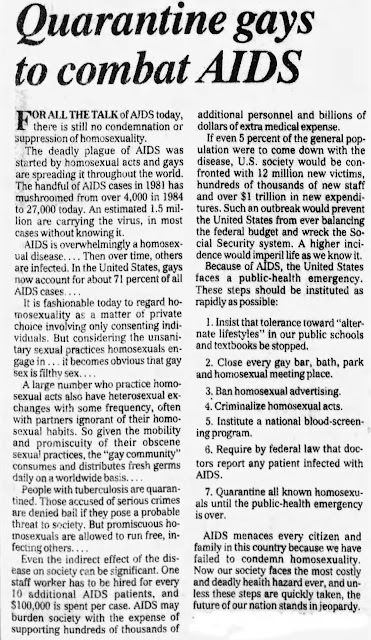 Yesterday's post was related to World Aids Day, observed on Dec. 1. One thing I did while thinking about that was to scan Chariton and Des Moines newspapers to refresh my memory of how AIDS was covered during the period 1983-1995. Researchers now estimate that what we call the HIV retrovirus had spread into the Americas from Africa as early as 1966 but it first was isolated by French researchers during 1983.

I was happy to come across, in a community news column from 1995, a reference to a friend of mine who at the time was managing an AIDS helpline in a far-away city. Wow, I thought, it was pretty brave of that proud mother in a little town to share such news back then. In fact, I sent a clipping off to him as a reminder.

Of course there were letters to the editor like the following, published on the Opinion page of The Des Moines Register on Feb. 11, 1985, ten years earlier, that reflects fairly well the thoughts of a good many Iowans --- and others --- at the time about AIDS. No suggestion that research to find a cure might be useful, but a good deal of "othering" --- a tendency that those of us who were gay then, and still are, are accustomed to, but still find annoying.

Muslims and those with hispanic roots are among the current targets, although in a different context. And of course, the anti-gay sentiment remains, especially among evangelical Christians.

In all fairness, it should be pointed out that rebuttals to this letter and other also were published as the days passed, including well thought out responses from long-time activist John Schmacker.

I've removed the author's name from the letter --- perhaps he might not write exactly the same thing today. And it's useful to note that gay folks weren't the only sinners within range of his radar. Another of his letters to the editor of that year pointed out that "alcoholism is a sin which results in bondage, and bars the individual from heaven."

For all the talk of AIDS today, there is still no condemnation or suppression of homosexuality.

The deadly plague of AIDS was started by homosexual acts and gays are spreading it throughout the world. The handful of AIDS cases in 1981 has mushroomed from over 4,000 in 1984 to 27,000 today. An estimated 1.5 million are carrying the virus, in most cases without knowing it.

AIDS is overwhelmingly a homosexual disease .... Then over time, others are infected. In the United States, gays now account for about 71 percent of all AIDS cases ....

It is fashionable today to regard homosexuality as a matter of private choice involving only consenting individuals. But considering the unsanitary sexual practices homosexuals engage in ... it becomes obvious that gay sex is filthy sex ....

A large number who practice homosexual acts also have heterosexual exchanges with some frequency, often with partners ignorant of their homosexual habits. So given the mobility and promiscuity of their obscene sexual practices, the "gay community" consumes and distributes fresh germs daily on a worldwide basis ....

People with tuberculosis are quarantined. Those accused of serious crimes are denied bail if they pose a probable threat to society. But promiscuous homoosexuals are allowed to run free, infecting others ....

Even the indirect effect of the disease on society can be significant. One staff worker has to be hired for every 10 additional AIDS patients, and $100,000 is spent per case. AIDS may burden society with the expense of supporting hundreds of thousands of additional personnel and billions of dollars of extra medical expense.

If even 5 percent of the general population were to come down with the disease, U.S. society would be confronted with 12 million new victims, hundreds of thousands of new staff and over $1 trillion in new expenditures. Such an outbreak would prevent the United States from ever balancing the federal budget and wreck the Social Security system. A higher incidence would imperil life as we know it.

Because of AIDS, the United States faces a public-health emergency. These steps should be instituted as rapidly as possible:

1. Insist that tolerance toward "alternate liestyles" in our public schools and textbooks be stopped.

6. Require by federal law that doctors report any patient infected with AIDS.

7. Quarantine all known homosexuals until the public-health emergency is over.

AIDS menaces every citizen and family in this country because we have failed to condemn homosexuality. Now our society faces the most costly and deadly health hazard ever, and unless these steps are quickly taken, the future of our nation stands in jeopardy.
Posted by Frank D. Myers at 7:04 AM