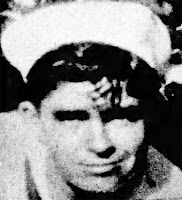 John Pence seems to have been a memorable young man and it would be an honor to claim him as a Lucas Countyan. But John was an Osceola boy and when he died on Dec. 7, 1941, aboard the U.S.S. Pennsylvania at Pearl Harbor, he was the first among our neighbors to the west as well as somewhat indirectly from Lucas County, too, to give up his life during World War II. Osceola's Davis-Pence American Legion post is named in part in his honor.

He was, however, a 1938 graduate of Chariton High School and when his classmates met for reunions  as the years passed, they remembered him along with others in a class hard-hit by war. Beryl L. Clark, Prosdocimo "Dutch" Della Betta, Lucille Jervis, Andy Knapp and Lyle Mosbey, also were classmates who died. Knapp, in fact, was the first Lucas Countyan, although that would not be known until after the war was over.

John, born at Garden Grove in Decatur County on Oct. 16, 1920, was one of six children of Clarence B. and Nellie Pence. Clarence was a painter and decorator by trade and when John was four, the family moved to Osceola where he opened a small paint and wallpaper store.

John spent most of his high school career in Osceola, where he excelled academically as well as in athletics and theater. But the late 1930s were hard times and John worked to help support his family. During February of 1938, he found a job in Chariton that allowed him to work longer hours at a higher rate of pay than he could find in Osceola and attend school, too. So he found room and board in Chariton --- and moved east.

The Charitonian Quill, the student newspaper of March 8, 1938, noted his arrival as follows:

"John Pence, a former student of Osceola High School, after accepting a job in the Chariton Hatchery, entered C.H.S. a week ago last Wednesday to complete his senior year.

" 'I came to Chariton from Osceola because of the job in the hatchery. I believe I'll make more money here than I did in Osceola. In Osceola I published a paper with the help of a close friend of mine. We called in "The Thistle," ' stated John. By selling advertisements to the businessmen of Osceola the boys took in enough money to publish the paper and make a little profit for themselves. After the paper was printed, they distributed it on the streets gratis.

"John is short and slim, and has brown eyes and wavy black hair. He says he likes C.H.S. very much. He is taking Shorthand 4, Commercial Law, American Government and Typing 4, just as he did in Osceola."

An aspiring thespian, John almost immediately tired out for a role in the CHS Class of 1938's senior class play and won the plum role of "Tommy" in a play by the same name, presented on April 6.

The Osceola High School student newspaper, The Chief, reported in its edition of  April 12 that "John moved to Chariton February 21, last, and we are extremely pleased to learn of this honor accorded to him, especially since there were a large number of students who tried out for the parts."

John continued to work in the hatchery at Chariton following graduation later than spring, but we don't know for how long. When he enlisted in the U.S. Navy during the spring of 1939, he gave his parents' home in Osceola as his permanent address.

On April 6, 1939, The Osceola Sentinel published a letter that John --- now at the Great Lakes Naval Training Center --- had written to veteran Osceola physician, Dr. Frank W. Sells. I got a kick out of reading it, since the personality of the author seems to come through clearly, so here's the text:

"Dear Dr. --- I know you don't like beating around the trees, so I'll tell you exactly why I write you. I think you might be interested in knowing a few details of my navy life so far. First, I like it fine and that really means something. Second, we have one of the best commanders in the U.S.N. He reminds me very very much of you, Doctor. Now I am not trying to flatter you, because I know you don't like that.

"We were issued $99.97 worth of clothes gratis. I had my teeth all fixed up in first class condition by a good dentist. I get out of training in five and a half weeks more. I have 6 days furlough, then I return and we (by we I mean my company) go to Norfolk, Va., and then up to New York. From there we go to San Francisco via Panama Canal. From there we go to Hawaii. It makes a nice trip considering everything. Don't forget to patronize Pence's Paint and Paper Place when you are in need of paint or wall paper.

"Well, Doctor, I don't suppose you are so awfully interested in this letter so I'll close now. Hoping to hear from you soon, I am very sincerely yours, John W. Pence.

"P.S. --- Received a letter from Dr. J.N. Goodman, formerly of Osceola who lives in Milwaukee. Find it enclosed. Please return it if it is not too much bother. Love. John."

More than two years later, John had advanced to the rank of radioman 3rd class (E4) and was stationed aboard the U.S.S. Tracy, a Clemson-class destroyer. The Tracy had entered the navy yard at Pearl Harbor for overhaul earlier that fall and as Dec. 7 dawned, lay at Berth 15 with her machinery, boilers and guns dismantled. Only a skeleton crew remained aboard. The rest of the men, including John, were living in receiving barracks ashore.

As Japanese planes were attacking, some of the crew returned to the Tracy and hurriedly reassembled guns in order to fight back; others went to the U.S.S. Cummings to help man her guns. Others, including John, boarded the U.S.S. Pennsylvania to help operate the battleship's antiaircraft batteries.

The Pennsylvania, lead ship of the Pennsylvania class of super-dreadnaught battleships, was in drydock in the Pearl Harbor Navy Yard on Dec. 7 --- and one of the first ships in the harbor to open fire as Japanese dive and torpedo bombers attacked.

John, once aboard, joined a crew working at and supporting a 5-inch gun mount that was wiped out when a 1,000-pound Japanese bomb struck the starboard side of the Pennsylvania boat deck and exploded inside Casemate 9.

Although the Pennsylvania survived the attack, she lost 28 men --- including John and two of his mates from the U.S.S. Tracy, John A. Bird and Laddie John Zacek. Identifiable remains of neither John Pence nor John Bird were recovered; they are commemorated in the Courts of the Missing, Honolulu Memorial. John also is commemorated on the tombstone in the Garden Grove Cemetery that marks the graves of his parents.