Whose World War I rank was highest of them all? 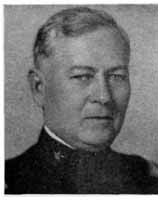 I got to wondering the other day while following the narrative of Lucas County's World War I effort who the highest ranking military officer with Lucas County roots during that war might have been.

So far, my best candidate is Col. George Washington Stuart, born into Chariton's lawyerly Stuart family on Feb. 22, 1875, who already had advanced to the rank of colonel by the time he was deployed to Europe during 1918.

The colonel's parents were Theodore M. and Sarah (Walker) Stuart and he was the second of four sons among their six children.

George was featured in a front-page article in The Chariton Leader of Oct. 25, 1917 --- as thousands of young American men nearing the end of their training cycles were facing imminent deployment to combat in France. The text of the article summarizes Stuart's career to that point:

"A Boston paper recently printed a photograph of the army officers of Camp Devens, in which appears that of Col. George W. Stuart, who is now stationed there in the duties assigned him. He was raised in Chariton and our people are glad to note his promotion.

"Colonel George Washington Stuart, now of Camp Devens, Mass., is the second son of Mr. and Mrs. T.M. Stuart, of Chariton, Iowa, and was born and reared here; from Chicago University he entered the military academy at West Point from which he graduated in 1899. He served in Alaska during the uprising at Nome; was with the troops that declared military rule and took possession of the town and camp; helped to build the first telegraph line there and superintended the building of Fort Gibson on the Yukon river in the tundra country.

"During the first administration of President Wilson, when it became necessary for our government to send troops to Mexico, he (a captain at that time) spent two or more years in that country. From there he was ordered to the Army of the East to organize and conduct schools for the officers of the then National Guards in New Hampshire, Maine and Massachusetts.

"Later, as soon as our country took a stand for right and justice for all mankind, he has been heroically mobilizing the guardsmen and the new army, and has now reached the rank of colonel. After all these years, since 1899, of various hardships, the worst to him was the great need of preparedness. What the next step will be is beyond the ken of man. God bless and keep him is the earnest prayer of an old friend."

While a young officer stationed in the Philippines, Stuart had married on Sept. 2, 1909, Florence Partello, daughter of Maj. and Mrs. Joseph M.T. Partello. Maj. Partello had launched his military career during what sometimes are called the Indian Wars and also was a legendary marksman. Although the Stuart marriage endured for 40 years, there were no children.

George was indeed deployed to the battlefields of Europe not long after The Leader story was published and served with distinction in France and Belgium as commander of both the 9th and 148th Infantry Divisions.

Following the war, Stuart commanded a brigade of the 37th Division and served both as chief of staff and commander of the division before its demobilization.

He retired during 1939 after a 40-year career and settled down with Florence in Carmel, California, where he died on March 2, 1948. She died during 1959. Both are buried at Golden Gate National Cemetery.
Posted by Frank D. Myers at 6:51 AM